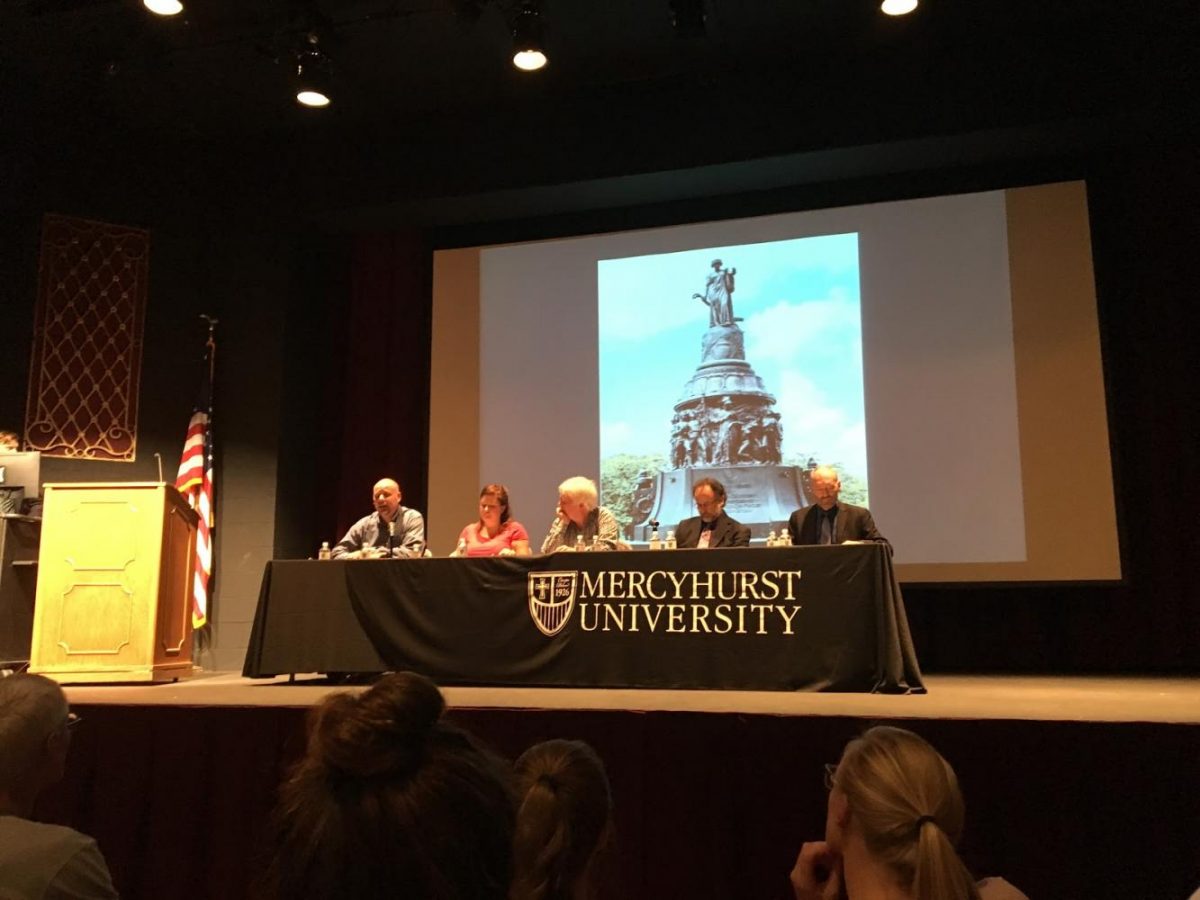 The focus of the forum was the controversy regarding statues of Confederate generals and officials. The issue has taken a spotlight in the media, especially since a protest regarding the removal of such a statue in Charlottesville, Virginia, resulted in several deaths as well as a media frenzy.

Some claim that since the statues and memorials honor the men who fought to keep slavery in this country, they are racist and offensive and ought to be removed, while others argue that the statues are part of both local and national history, and thus deserve to remain. Many others fall somewhere in between these points of view.

When approaching the topic, the panelists agreed on some fundamental points: that slavery and racism are morally wrong, and, centrally, that there would be no easy answers to the question of what to do with Confederate monuments.

However, not one of the panelists agreed completely with any other. The assembled professors represented various disciplines, and each approached the subject in accordance with their own background. There are many ideas regarding what ought to be done about the controversy, and the opinions expressed reflected this.

Olszowoka mentioned the time periods in which monuments to the Confederacy were built, first in the era of Reconstruction after the Civil War, and second in the 1950s and 1960s, when the civil rights movement was happening, resulting in a resurgence of Confederate culture.

“What you have here is people trying to tell a different version of history, one that, I would argue, is a-historical,” he said.
Heerboth was strongly in favor of the removal of Confederate monuments.

For Heerboth, monuments to the Confederacy perpetuate systematic racism and even constitute social violence.

Magoc was uncertain as to what the answer to the controversy is. He pointed to multiple possible solutions, none of which would satisfy everyone. One answer in particular he referred to was used in Harper’s Ferry, West Virginia, the location of John Brown’s historic raid, an event that contributed to the outbreak of the Civil War.

In the 1990s, the National Park Service attempted to relieve tensions surrounding a controversial statue erected in the 1930s by supplementing the statue with a marker, contextualizing the statue and the history of the Civil War in the area. The solution was not particularly successful, and Magoc freely admits it is not a perfect solution.

“I’m still uncomfortable with the idea of interpretive markers as an answer, as a satisfactory answer to these monuments that embody and absolutely, deeply, profoundly reflect this deep and dark history of racism and slavery in this country,” Magoc said.

The aesthetics of commemoration were of particular interest to Sullivan.

“Where (the monuments) are and what they’re intended to do is an important, salient part of this debate,” Sullivan said.

Such monuments are designed with this idea in mind, and thus send messages beyond the obvious. To Sullivan, it is clear that the monuments perpetuate systematic slavery and racism, pointing to revered Confederate generals who bought and sold slaves, professed outwardly to be fighting to keep slavery and committed horrific crimes against black soldiers.

Clemons looked to the Constitution of the United States and Lincoln’s Gettysburg address, and how they interact with each other, for insight into the war that divided and continues to divide the country.

“In November 1863, with only 272 words, in a three-minute speech (Lincoln) changed the constitution and our country forever,” said Clemons. “He did so by focusing on the spirit, not just the letter of the constitution, and by tying it to the Declaration of Independence, especially the claim that ‘all men are created equal.’”

Though drawing conclusions around such a controversial topic is incredibly hard, discussing them is important, and Mercyhurst is doing its part to encourage its community to consider the issue of Confederate monuments thoughtfully.