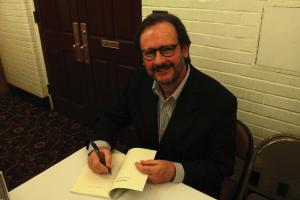 Jill Barrile photo: Poet Gary Myers was a professor at Mercyhurst College in the English department from 1986-1989 and came back to speak at the ninth annual Literary Festival.

Myers taught in the English department at Mercyhurst College from 1986 to 1989. During his time, he served as department chair, and he founded the Poetry in the Schools program at St. Luke School. Since then, he has helped build the Creative Writing program as the Dean of the College of Arts and Sciences at Mississippi State University.

“It’s exciting to see this college growing as fast as it is,” Myers said. “Some things are the same, but there are new things as well.”

Myers began writing poetry in college. His inspiration came from poets from all over the world rather than from people near his home in the Midwest.

“There’s a certain lack of something in the Midwest that drove poets to Europe,” Myers said.

He drew inspiration from surrealist poets of Spain and France, and he talked about his experience and the inspiration he received from South American anti-poetry.

“It has a kind of attitude,” Myers said. “I got mesmerized by this style of South American poetry.”

Sophomore Seth Stonis was impressed with Myers’ variety of influences.

“I noticed a lot of his work talked about the moon and the stars. It’s cool that he’s from the Midwest, but he uses European influence,” Stonis said.

Though his poetry covers a wide variety of topics, imagery is an obvious strength of Myers. Sophomore Chelsea Schermerhorn admired Myers’ imagery.

“I liked the recurring images he used, especially women. For some reason the images were very evocative especially when repeated,” she said. “I’ve never seen someone use images as repeatedly but still convey different ideas.”

Myers read some of his newest works, which concern the events that took place during the Holocaust.

His new series of poems are poems written in four lines, which are known as quatrains. The poems that Myers shared showed the crowd unsettling scenes in their minds.

“I actually went to a concentration camp in Germany,” said Stonis. “I could see what he was talking about, and I could tell that he was hesitant writing on the topic.” 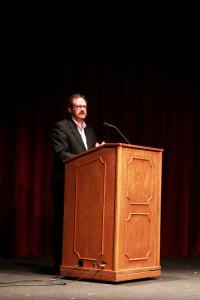 Jill Barrile photo
“Try to find a way to break out of the commonality of what the language offers,” he said. “You can have a lot more fun if you consider other perspectives. Otherwise, you’ll be locked into conventional writing.”

The best advice Myers could give was to “take risks and chances just to see what can happen. You’d be surprised at what you do while experimenting.”

The third and final event of Mercyhurst’s Literary Festival will take place Thursday at 8 p.m. in Taylor Little Theatre with the unveiling of the Lumen and the presentation of the P. Barry McAndrew Writing Awards.