Baker to speak on gender, spirituality 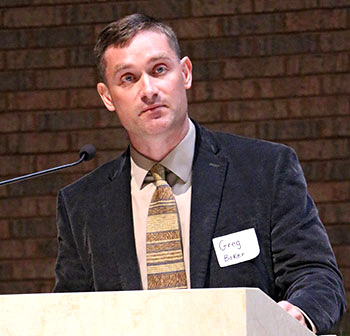 Photo contributed by Diocese of Erie

Greg Baker, director of Campus Ministry and adjunct instructor of Catholic Studies, will speak on gender and spirituality on Oct. 4 at 7 p.m. in Walker Recital Hall.

Baker has been working on his Doctor of Ministry through Fordham University. His dissertation is on spirituality and gender, approaching it from a male perspective. He is scheduled to defend his dissertation Nov. 8 in New York City.

“I’m concerned about guys on college campuses,” said Baker. “I don’t see a lot of them involved in a lot of ways. I worry that guys are starting to find a poverty of identity, they’re not always sure who they are, what it means to be a guy in today’s culture.”

Baker’s work with students has influenced his thoughts on the subject. Despite his concerns, Baker has found encouragement through campus ministry work.

“As I get to know students and hear their stories and see their gifts come out, the students give me a tremendous amount of hope that things in our culture that seem like they can’t be reconciled, that they can be,” Baker said.

In addition to his dissertation research and his responsibilities at Mercyhurst, Baker is married and has four children. Juggling everything is a feat in itself.

“Doctoral work has been invigorating and exhausting,” said Baker. “My wife had been nothing short of hectic. My children have been very understanding. They have known the right times to challenge me to put down my work and spend quality time with them. And 4 a.m. and strong coffee have become my closest allies. I never want to do doctoral work again, and I would not trade the experience for anything.”

As the father of three young boys, family life is an important influence for Baker.

“The more I studied this, the more I looked at those cute little faces and thought, I don’t know how to lead you towards manhood, whatever that means,” said Baker. “And then the further I got on in my studies, I realized this was just as much about my daughter and about my wife, in a culture where in too many relationships women are made to suffer, to fear violence at the hands of men.”

Studying spirituality and gender from a Catholic perspective adds a dimension to topics that are already complex. Spirituality and gender both defy easy explanations, and the teachings of the Catholic Church are not always palatable to a society where issues of gender have come to the forefront in popular media.

Despite evolving societal ideas on gender roles, there are still rigid ideas of what masculinity and femininity are, a subject Baker intends to focus on in his lecture.

Among topics Baker intends to address is complementarity. This is the idea that men and women are made to fit together, biologically and socially.

Baker will also engage in a discussion of patriarchy, a subject that is impossible to ignore when looking at spirituality and gender. Baker plans to address “why our church is better than patriarchy, and we can do better than that.”

This lecture is open to the community and will take place on Oct. 4 at 7 p.m. in the Walker Recital Hall, even if it is Hurst Day.