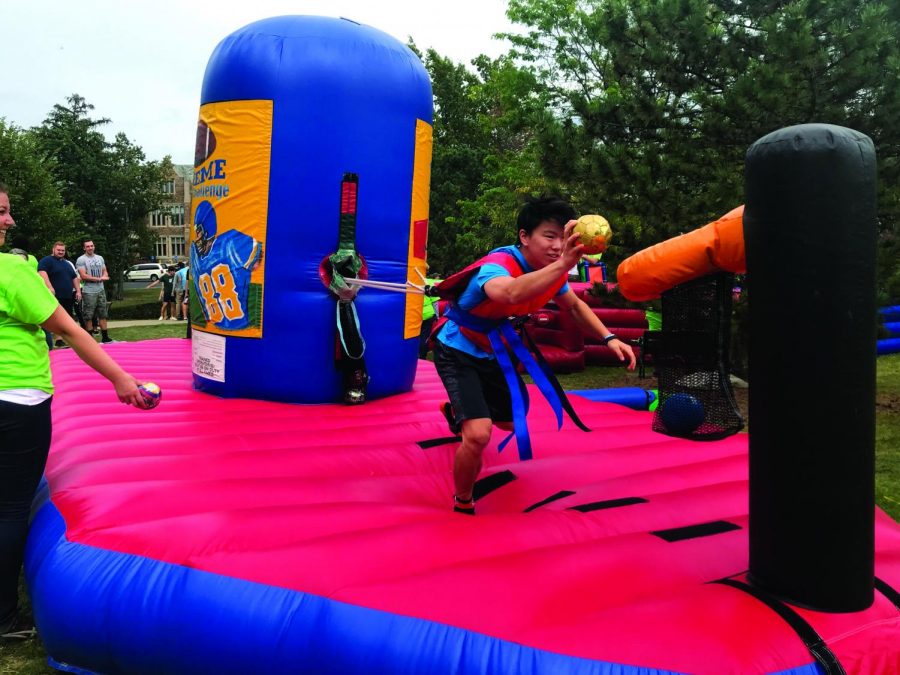 Hurst day was a roaring success, with a scavenger hunt, inflatable games and food.

The day began at 6:45 a.m. with the sound of bagpipes and a mass email to the student body to announce the arrival of the long-awaited day.

“The bagpipers and the cabinet members went around campus to wake everyone up,” said Megan McKenna, director of Residence Life. “Residence Life staff accompanied them to make sure everything was easily accessible to them.”

Activities began with the scavenger hunt at 10 a.m. For this event, students created teams online, complete with themes and costumes. In a campus-wide competition, 141 teams raced to follow clues and advance.

“We had much more scavenger hunt teams this year than in years past,” said McKenna. “That level of student involvement is exciting.”

The top 25 teams moved on to the second round, where participants were required to follow pictures to specific locations on campus and take a team selfie there. The top three teams then advanced to the final round — trivia — for the chance to win a prize.

Members of the team that placed second overall, including Morgan Wangler, senior Education major, and Lynne Gillot, senior Sports Medicine major, were thrilled with their accomplishment.

“When we made it to the third round, we were genuinely surprised, because none of us had made it to that round before,” said Wangler. “It was fun to represent the school in that sort of way.”

“To anyone questioning whether to do the scavenger hunt or not, you definitely should. You’ll only get to do it four times in your college career,” said Gillot. “What do you have to lose? Plus, the costumes are fun to make.”

“We used to bus students to the Erie campus to participate in the scavenger hunt. However, we realized that they weren’t able to participate in the scavenger hunt fairly since they didn’t go to the Erie campus,” said Michelle Simpson, director of Student Life at MNE. “So we finally got them to do it at North East, and it was a successful and great time.”

Following the scavenger hunt, the day’s events continued with games, inflatables, music and food. Uniquely, each food stand had a movie-related theme, including specific cosplay characters, music from the movie and theme-appropriate dishes.

“The goal this year was to make the food stations more interactive,” said Katie Boyd, outside administrator for Parkhurst. “So we decided on a movie theme, with characters and music at each stand.”

“I was worried about the idea at first, because you never know how people are going to react or respond,” said Boyd. “But I felt that choosing movies that people recognized would help the idea get positive feedback.”

MNE students rode buses to the main campus to participate in the afternoon activities. The buses arrived at 11:30 a.m. and departed at 3:30 p.m.

The afternoon activities ended at 4 p.m., giving students an hour before the steak dinner concluded Hurst Day at 5 p.m. The steak dinner took place in both the Grotto Commons and the Laker Inn. The menu included steak, baked potato, salad, various desserts and more.

“The steak dinner is a great treat and a great way to end the day,” Boyd said.

This was also the first year that MNE held a steak dinner. As with the scavenger hunt, they had participated in the main campus steak dinner in years past.

“It’s nice to know that the students have this one day of the year to look forward to,” Simpson said.

Hurst Day is a popular event among both students and staff, giving a fun and needed break.

“This is a special event for the students that doesn’t happen everywhere, so they should participate in it and have fun with it,” McKenna said.

The goal is to improve Hurst Day each year.

“As per the president’s request, Hurst Day needs to be bigger and better each year, and I think we’ve stood true to that this year, not only with employee involvement but also with student involvement,” said Courtney Olevnik, director of donor relations. “We’re going to debrief about this Hurst Day soon and how we can make it even bigger and better for next year.”