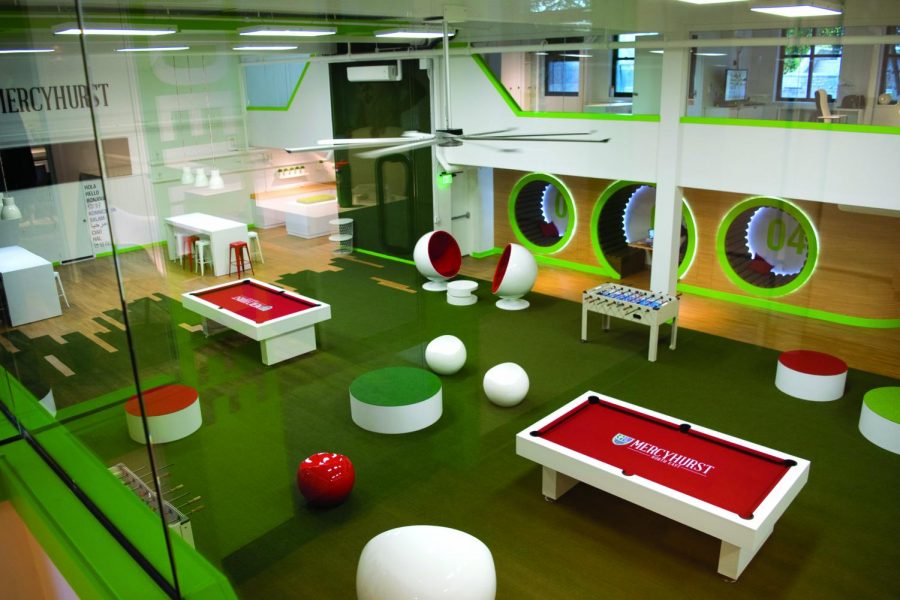 Individual study pods are only one area where students can relax or study at Mercyhurst North East’s student union. There are also platforms, as well as pool tables and TVs.

In a stunning resurrection of a hardly used space, the student union at Mercyhurst North East was completely renovated. Located in the lower level of Miller Hall, the new union opened its doors on Oct. 18.

The old student union was described by members of the community as dark and uninspiring.

“(The old student union) was there for commuters, but it wasn’t a place where students could actually come together and have fun in,” Jennifer Powell, a second year Nursing student, said.

Throughout the redevelopment of the space, students were able to see sketches and prototypes of what the final outcome was supposed to look like.

“It is even better than the pictures, being able to see it in real life and the different aspects of it,” Powell said.

With its bright colors and playground-like structures, the area has been reconfigured to use natural lighting to its advantage, while also incorporating an array of areas that appeal to different types of people.

Keyman Asefi, instructor of Interior Architecture and Design, divides the large room into five different spaces: the dining area, the refreshment zone, the playground, the study pods and the platforms. There are spaces for everyone, whether introverted or extroverted, and numerous study spots. A student can sit alone in one of the study pods or sit on one of the platforms to meet new people.

“Emotional architecture is architecture that responds to us and creates a very attractive environment for its occupants to hang out in, to study, to play or even just take a break from the ordinary classroom,” Asefi said.

Although the revolutionary design is brand new, a number of students, both on campus and commuters, have taken to the space and enjoyed playing pool, watching TV, or simply relaxing in the artistic space.

Michelle Simpson, director of Student Life at Mercyhurst North East, believes that because of the large number of commuters, it is necessary for the university to have a homey feeling.

“It is important that they feel a connection to the school and have a place to feel at home in,” Simpson said.

The new student union creates the opportunity for students to build those connections while also creating a supportive environment where they can study if they need to.

While many two-year schools may not prioritize smaller things such as community space or study areas, Mercyhurst North East has put in the extra effort to stand apart from other schools and provide an example of how much their students are cared about.

“I definitely think it was a good use of school resources,” said Powell. “When students come on tours, especially high schoolers, they definitely want to see that community area where they can hang out and have fun.”

The overall hope is that the new healthy environment has a positive impact on the students who enjoy the space, while also becoming a new favorite for anyone who visits.