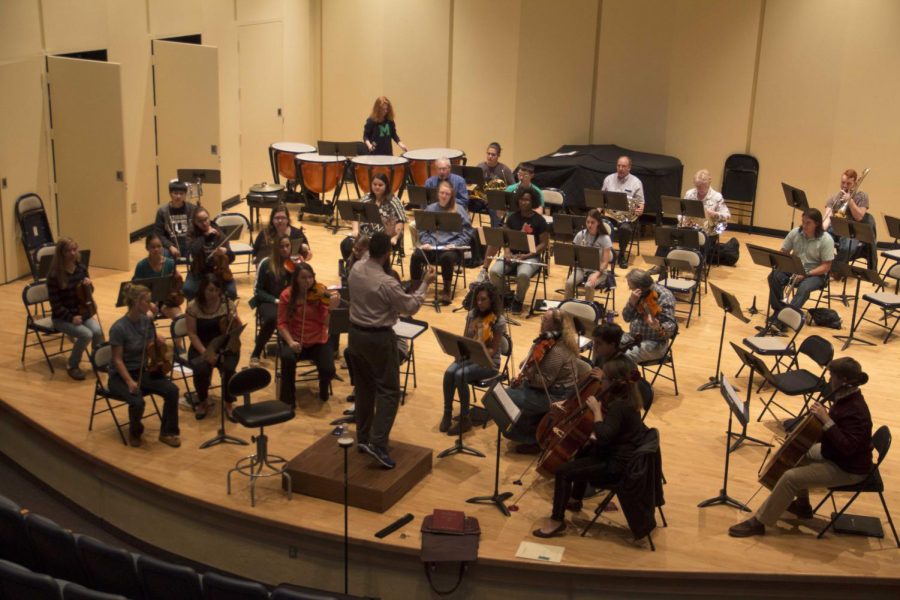 The newly named Civic Orchestra represents both the Mercyhurst University community and the Erie community.

On Oct. 29 at 4 p.m. the Mercyhurst Civic Orchestra will perform a program entitled “A Visit to Eastern Europe.”
Jonathan Moser will conduct Tchaikovsky’s Symphony No. 4 in F minor, Op. 36 and guest conductor David Tedford, D.M.A., will conduct Dvorak’s Violin Concerto in A minor, Op. 53 with Moser performing the violin solo.
One of Moser’s goals as the music director of the Mercyhurst Civic Orchestra is to feature a professional soloist each year.
He believes that this will benefit the Mercyhurst community greatly for two reasons.
First, learning to accompany a soloist is an important skill for the orchestra members to have, and secondly, it allows Moser to feature Mercyhurst’s own music faculty with the orchestra.
One benefit of Moser taking a turn as soloist is that inviting a guest conductor will expose the students in the orchestra to different conducting styles and rehearsal techniques.
Tedford is a former student of Moser’s and currently works as director of Orchestras at Bloomsburg University of Pennsylvania.
Moser will perform the Dvorak piece in April with the Bloomsburg University Orchestra under Tedford’s baton, and the two agreed it would be a good opportunity for Moser to perform it with the Mercyhurst Civic Orchestra as well.
The performance on Oct. 29 will be the first time Moser performs the piece, debuting the first concerto he has learned from scratch since 2004.
Moser says that learning a concerto brings up issues of technical mastery, endurance, artistry and musicality.
In addition, concerti are performed with orchestra, which is on a much larger scale than a one-on-one collaboration or even a performance in a quartet.
The end performance, in Moser’s words, is a “conversation that takes a great deal of thought and sensibility on the parts of both the soloist and orchestra.”
The Tchaikovsky piece was chosen first, and the Dvorak piece was selected because it paired nicely with it.
Both composers were Slavic, lived during roughly the same time period and based the final movements of these works on folk music.
Tchaikovsky’s 4th is a well-known and popular piece, a standard of the orchestral repertoire.
Another of Moser’s goals is to increase the number of such standards that students have performed by the time they graduate because they are likely to perform them again, whether with a professional or community orchestra.
Moser says that the first movement of the Tchaikovsky is incredibly difficult in many ways.
The movement is written in 9/8 and Tchaikovsky uses a lot of hemiola figures.
Moser describes the third movement as a “delightful little scherzo,” which begins with an entirely pizzicato string section, contrasting with the colors of the woodwinds and brass when they come in.
The piece ends with a frenzied final movement that requires balance from the orchestra above all.
While Tchaikovsky’s 4th is a relatively well-known piece, the Dvorak piece is not played very often.
It was written by Dvorak for the renowned violinist Joseph Joachim, a great proponent of his.
Although the two worked closely while Dvorak was working on it, with Joachim giving feedback throughout the compositional process, the violinist would never perform it; the first movement transitions into the second without the customary pause, something that Joachim objected to but Dvorak refused to change.
Moser feels that this decision on the composer’s part balances the piece.
The third movement is incredibly long while the first two are short by comparison, so by instructing the performers to transition immediately into the second movement Dvorak has essentially divided the piece into two distinct, equal halves.
Student soloists in this concert are: junior Elizabeth Rathburn, oboe, Music and Communication double major; senior Mariana Mathewson, cello, Music Education and Composition major; Sabrina Sosa, piccolo, second year graduate student Organizational Leadership; Isaiah Howard, flute, Music Performance major; and sophomore Chris Wagler, clarinet, Applied Forensic Sciences major with an Anthropology concentration.
Tickets to this performance are $5 for the general public and $2 for Mercyhurst students, faculty and children aged 12 and under.