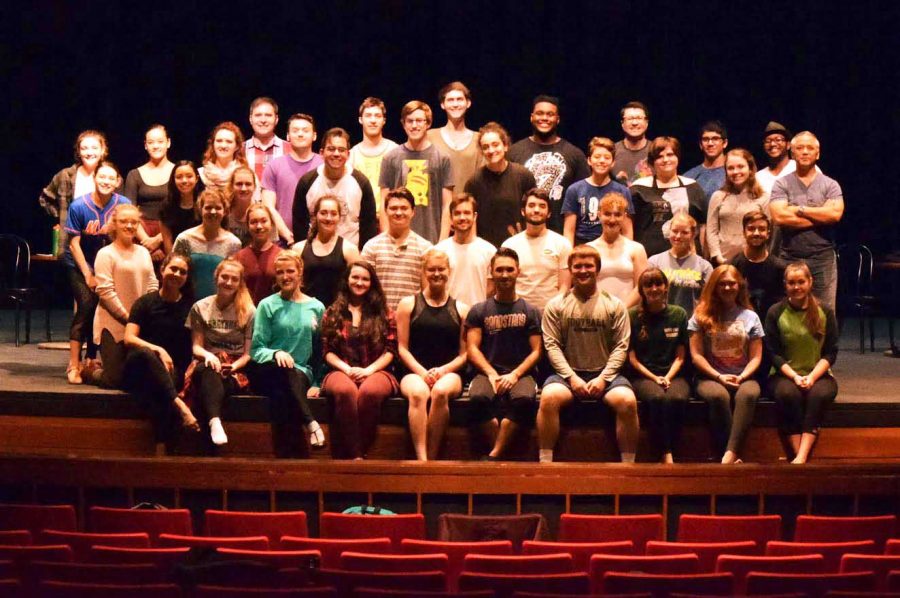 “Guys and Dolls” is a collaborative production of the Theatre, Dance and Music departments.

This November, Mercyhurst will debut the much-anticipated collaborative musical production of “Guys and Dolls.”
This production will be directed by Brett D. Johnson, Ph.D., assistant professor and director of the Theatre program, and choreographed by Mark Santillano, assistant professor of Dance.
Not only will the production present dynamic characters to the stage, but they are also using 15 different backdrops from the 1992 Broadway revival of “Guys and Dolls.”
Johnson said, “Bustling with gamblers, gangsters and sassy showgirls, ‘Guys and Dolls’ is a high-energy, crowd-pleasing comedy. It celebrates Broadway’s Golden Age with one of the greatest scores ever written for a musical, a masterfully witty book and lyrics and Damon Runyon’s glorious comic book world of New York City.”
This performance will be a refreshing change, since it is the most recognizable musical to be displayed on the Mercyhurst PAC stage in years.
“We strive to produce great literature, and ‘Guys and Dolls’ is the perfect musical comedy,” Johnson said. “It deserves a place on the shelf next to ‘Death of a Salesman,’ ‘Long Day’s Journey Into Night,’ and ‘A Streetcar Named Desire.’ Drop even a single scene, and the entire structure would collapse. It’s that well made.”
“Guys and Dolls” originally premiered on Broadway in 1950, and depicts the high risks at stake when gambling with illegal enterprises as well as love.
Four main characters, originally conceived by Runyon in his comic book series, grapple with intersecting love stories while using Runyon’s mix of formal language and slang.
Over 50 students will be performing in the musical.
This production will truly be a collaboration across three art departments of Mercyhurst University: Theatre, Dance and Music.
“‘Guys and Dolls’ is the perfect collaborative project for Theatre, Dance and Music because of the large cast, extensive use of dance and intricacies of Frank Loesser’s immortal score.
“It provides opportunities for students in each department to showcase their strengths while also learning from each other,” said Johnson.
There will be a 25-piece orchestra playing in the orchestra pit as well as Mercyhurst dancers present on stage throughout the show.
Principal Actors include senior Music major Sarah Krempasky as Adelaide, junior Information Technology major Owen Hitt as Nathan, first year graduate student Jillian Johannes as Sarah and sophomore Biology major Jacob Tretinik as Sky.
Krempasky said her favorite aspect of the show is “finally having a large cast and working in a bigger venue like the PAC.”
“It is so exciting to dance and sing again,” she said.
Hitt said that to him, the “collaboration between the Dance students and the Theatre students has been wonderful, and I think that the show as a whole is going to look, sound and feel really great.”
Hitt has been participating in Mercyhurst’s Theatre program since his freshman year.
When asked the most challenging aspect of her role, Johannes said, “Doing justice to the truth and relevance of the character and of the show, for that matter.
“Identifying the actions and telling Sarah’s story within this intricate web of lives has been and continues to be a fun and exciting challenge.”
It is Johannes’ first production at Mercyhurst.
Tretinik said, “it is quite fun to play a character that is sly and always has the right thing to say.”
Tretinik has been participating in Mercyhurst Theatre for two semesters and in theater productions for five or six years.
The production even has junior Dance majors Dominic Fortunato and Carrie VanOsten as dance captains for the production.
They have been responsible for knowing all of the specifics of the choreography for the production, as well as the answering of questions other members of the cast may have.
Not only will this be a high-energy and exciting production, it most definitely promises to be one of professional proportions.
Performances are Nov. 2-4 at 7:30 p.m. and Nov. 5 at 2 p.m.
Single tickets are $15 for adults, $10 for senior citizens and non-Mercyhurst students and $5 for Mercyhurst students with their I.D.