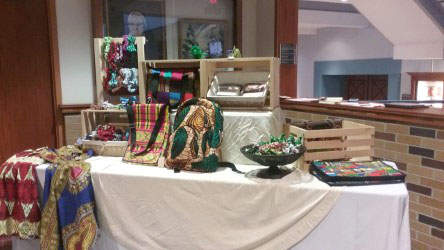 Items were available to purchase at the art gallery reception.

Artwork can be very powerful, especially when it is done by Eritrean refugees.
The Artists in Motion reception on Oct. 5 was a very interesting experience. When you walked in, you could see a lot of people, smell calming incense and taste different foods from the country.
They even had someone making the native coffee of Eritrea.
There was nothing I did not like there.
The exhibit consisted of paintings and photographs of different refugees, and they even had some things they brought over from Eritrea to show people what they use in their everyday life.
The refugees express their stories through painting, whether they are dealing with loss, traumatic events or traveling with family or friends. The community’s art teacher, Mebrahtu, encourages them to create artwork about social change.
Many of the painters ran away from different abuses, so the only option they had was to live in camps for a period of time.
In camps, they were taken care of, but not much is offered to them beyond that.
Many refugees are unsure of their future because there are restrictions with employment and educational opportunities, but a lot of them will travel in order to reach European countries.
All the artists are different ages, with the youngest being 13 and the oldest being Mebrahtu, 45, who had five works in the show.
Every painting has a different theme, such as love, pain, mourning, migrating and expectations.
Jodi Staniunas-Hopper, Art department chair, introduced the speakers and welcomed everyone.
There were several speakers there and one of the first speakers was from Eritrea. He came to America in 2006.
He showed a presentation regarding the refugees from his country, along with some pictures.
He talked about how there are about 65 million refugees and how almost 50 percent are unaccompanied minors.
The people in charge of the program wanted to highlight the work of the artists and to show it is not a fundraiser.
The presentation mentioned kids in the country are aware of what is happening over there now.
One of the children drew refugees being beheaded. He also discussed the different horrible things the people had painted.
The paintings include very heavy topics. It was also mentioned that it cost lots of money to pay to get refugees released.
There were some questions asked during a period of time in the reception.
A student asked, “What can we, as college students, do to help?”
The response was that we, as humans, need to be more aware of refugees.
There were a lot of good questions asked at the reception such as how to make a difference.
John Stauffer, a guest presenter, was in the Peace Corps, a volunteer and teacher in North Africa from 1966 to 1968. It was mentioned that students could contact agencies and volunteer.
Stauffer got reconnected with the program in 2003 and he helps refugees around the world through the America Team for Displaced Eritreans.
Another speaker was Ed Grode, who organized the whole exhibit and took the photos of the refugees.
“During my week at the camp, I took over 1,500 photos. The photos I chose to exhibit were ones that I hoped would humanize these very special people,” Grode said, regarding why he chose the certain photographs for the exhibit.
When he was a principal at an Erie school, the school would get exchange students that are refugees and he wanted to see where they came from.
“I got involved when I visited the Mai Aini Refugee Camp in northwest Ethiopia. I saw these works of art in the art teacher’s classroom and told him they should be shared with the world. I picked (the paintings) up a year ago and brought them to my home in Erie,” said Grode.