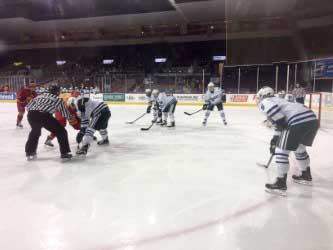 The Lakers get ready for the puck to drop in the second Snowtown Throwdown game against Ferris State.

The rather small crowd over the two contests at Erie Insurance Arena did not decrease the morale of Rick Gotkin’s hockey club in search of its first win.  But the fans who did make the trip saw the Lakers play extremely hard.  In one of their most even-sided nonconference performances in some time, the Lakers battled Ferris State to a series draw.  The Bulldogs struck twice in the opening frame on Oct. 20, and held on for a dramatic 3-2 win that nearly saw a buzzer-beater at the end of regulation.  Following this, the Lakers rode a strong power play and a furious attack in a three-goal third period to respond with a 4-1 victory on Saturday afternoon.  The Bulldogs (2-4, 0-2 WCHA) got off to a slow start on Friday in the first of a six-game road trip but rebounded quickly in their first meeting with the Lakers since the 2013 season and improved to 7-0-1 all-time against them.

The visitors found the equalizer on their first man advantage on the contest, turning a tripping call on the Lakers’ Nathan Bryer into Mitch Maloney’s third of the season, ripping a hard shot past Laker goalie Brandon Wildung.  Just three and a half minutes later, right-winger Ryker Killins created a rush and went on goal before Wildung stopped the initial shot.  Wildung would go on to have 36 saves for the night.  Dominic Lutz scored on the rebound for his first of the year and the first lead of the series.

It would only be 91 seconds into the second, however, that sophomore Joseph Duszak found Patrick Piacentini for a long wrister and his second of the campaign.  However, Lutz closed the scoring early just four minutes later and deflected a shot from Nate Kallen off a pass from Jasen Fernsler.  “I think it’s in preparation. We have to come right out first period, right off the opening draw and really bring it to them,” said junior Matthew Whittaker. “I think we kind of sat back and watched hockey for a bit to start the game.”  The Bulldogs outshot their hosts 39-30 and improved to 14-4-3 since the start of last season.  A last-minute charge from the Lakers off of a faceoff with 5.8 seconds left in regulation appeared to beat a sprawling Bulldog goalie Darren Smith, as it ricocheted in and out of traffic, but the potential goal was ruled no good after review.

“It’s great that we had a good third,” said Whittaker. “Unfortunately that tying goal didn’t fall for us, but I think that we can bring that into tomorrow.”  The Lakers would do just that, seizing control of the Saturday contest.  Starting off the game, the Bulldogs were hit with a slashing call with 2:38 left in the first, leaving Nathan Ferriero to claim the puck in a brief 5-on-3 — after Lutz had been called for hooking at 15:45.  He found Lester Lancaster, before the 2016 Atlantic Hockey Rookie of the Year cross-iced the puck to Taylor Best as he beat Justin Kapelmaster for the Lakers’ first lead of the series.  In outshooting the Bulldogs 14-4 in the opening frame, the Lakers’ special teams forced the first three penalties of the contest as part of seven in the contest out of nine overall.   A 2-on-1 break saw the Bulldogs’ Mitch Maloney and Andrew Mayer find Zach Yoder for a slow shot that snuck past Wildung at 8:22 of the second.

Meanwhile, the Lakers were able to kill off all three Bulldog advantages in this contest, but succeeded in finding more offensive opportunity off of their own.  It was just 38 seconds after the Bulldogs’ Tyler Andrew was called for tripping at 9:30 of the third that Whittaker doubled the Lakers’ lead off of assists from Best and Joshua Lammon.  The Bulldogs’ Cameron Clarke was booked for tripping at 16:12 of the period, creating momentum that allowed Best and Joseph Dusžak to find Whittaker.  Early in the third period, Jack Riley and Lancaster took advantage of a tripping call against the Bulldogs’ Zach Szajner at 2:28 of the frame.  Just 10 seconds later, Lancaster and Jack Riley found Derek Barach at the top of the point for his second goal of the season and the Lakers’ second power-play goal of the contest.

The club used a 11-5 shot advantage in the third and a 36-24 margin overall to keep the Bulldogs’ defense on their toes after they found a second-period equalizer.  But a defense that had held the Lakers scoreless for the last 38 and a half minutes on Friday were held to 0-3 on the man-advantage.  All three opportunities came in the last 23 minutes of the contest, while being booked on seven different occasions themselves.  The Lakers (1-1-2, 0-0-2 conference) are now 1-3-1 in Throwdown contests dating back to 2015.   The ongoing series marks the first contests for the Lakers at Erie Insurance since the last game before the opening of the Mercyhurst Ice Center in November 1991.  The next time the Lakers take the ice will be in Waltham, Massachusetts. There, the Lakers will take on the Bentley University Falcons in Oct. 27 and 28 contests.