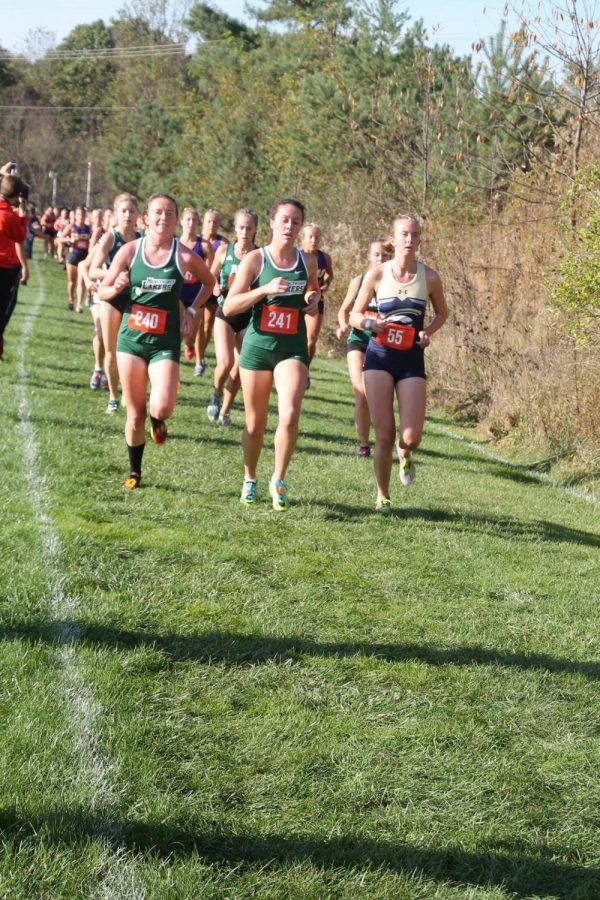 On Oct. 21, the men and women’s cross-country teams competed at the Pennsylvania State Athletic Conference (PSAC) Team Championships in California, Pennsylvania.  Overall, the women’s team had a strong finish and placed ninth out of 18 teams, racking up a total of 251 points.  Edinboro won the race with a total of 87 points.  Sophomore Molly Kennedy led the Mercyhurst women, finishing the six-kilometer race in 36th place with a time of 24:38.  This was just over a full minute slower than her other 6K finish of the season at the Westminister Fisher Invitational in September, where she finished first overall with a time of 23:24.

Coming just behind Kennedy in 38th place was senior Mary Jaskowak with a time of 24:40.  Junior Anna Warner finished in 44th with a time of 24:58, and junior Chloe Tyillian came in 50th at 25:11.  Rounding out the top seven were senior Sydney Van Leeuwen in 85th place at 26:03, freshman Henley Spracklen in 115th at 26:50 and senior Kelly Bochnewetch in 133rd with a time of 27:32.  Kennedy is humbled by her success on the course and is thankful for the support she gets from her teammates if she ever has a rough race.  “(Finishing first for Mercyhurst) is not my goal, exactly,” said Kennedy. “I love running with the top five. It is really nice because in cross country, because you have five people, if you do not have a good day, and your teammate does, they can pick it up for you. Even if you don’t feel well in the race you know that your teammate, whoever is right next to you, is able to make up the time that you don’t have.”

One fellow runner said that this course for the race was particularly hard and rough to run and thus led to the increased finish times compared to other 6K paces set this season.  “This course had a lot more hills than Erie has. The guys had to run double the hills. It was definitely an endurance course,” Kennedy said.  The men had a rougher race, finishing 15th out of the 16 teams represented, scoring 444 points. Shippensburg won the men’s contest with a total of 38 points.  Leading the Mercyhurst men was junior Daniel Dmuchowski, who finished in 101st place with a time of 30:59.
Following Dmuchowski was freshmen Dylan Bemiss in 107th at 31:12.  Finishing the top five for the team were senior Jacob Kramer in 110th at 31:16, senior Ryan Brennen at 119th in 31:49, and senior John Harry in 129th at 32:36.  Topping off the top seven for the men was freshman Richard Titus in 131st at 32:48 and senior Jacob Fuhrman in 136th at 34:12.

This race rounds out the end of their regular season, and both teams will be competing in the NCAA Atlantic Regional Race at Lock Haven University on Nov. 4.  “Our next step is regionals,” Kennedy said. “As a team we want to be in the top 10 because we haven’t been and we think that we can get there.”  Kennedy and the team as a whole are proud of how their season has gone and are optimistic about what the future holds for seasons to come.  Of the top seven girls who ran in the PSAC Team Championships, three of them are seniors and will be graduating this year.  “Overall, our season has been really good. We have a lot of talent on the team,” said Kennedy. “The seniors this year are really solid runners and we are going to really miss them next year, but we have got some young ones that are definitely going to step up and take their spots. We are a really close-knit team.”