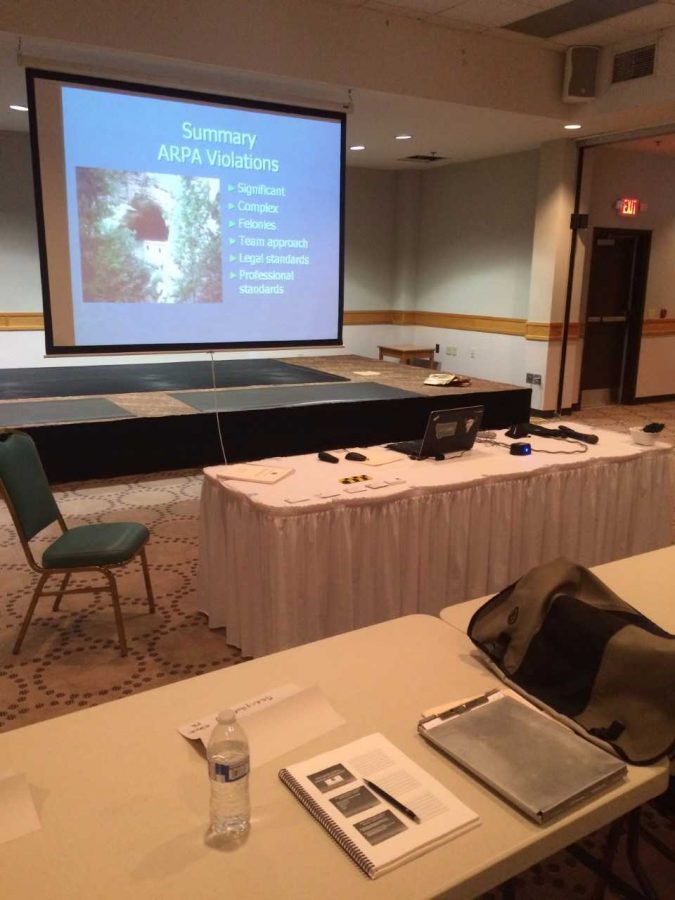 Edward Jolie, Ph.D., assistant professor of Anthropology/Archaeology and director of the Perishable Artifact Lab, completed two courses that will significantly enhance the department’s training and educational offerings for undergraduate and graduate students at Mercyhurst.

Jolie is already incorporating the information he learned into the courses he teaches, including his Anthropological Ethics course. He also sees the potential for graduate-level courses and is exploring possibilities for fee-based training workshops.

“There’s the potential that conducting and performing archaeological damage assessment and report preparation is something that our department can do,” Jolie said.

A large part of the five-day program revolved around the Archaeological Resources Protection Act of 1979. According to the National Park Service website, the act was designed “to secure, for the present and future benefit of the American people, the protection of archaeological resources and sites which are on public lands and Indian lands and to foster increased cooperation and exchange of information between governmental authorities, the professional archaeological community and private individuals.”

Jolie believes he has enough of a nuanced understanding of the legislation as it is tried in court today to better teach it to his students.

“It’s one thing to read and know the legislation as it’s written, then have the opportunity to spend five long days with people who’ve lived it, breathed it and have testified to it in a court setting,” said Jolie. “They gave us these extensive copies of the presentations that speak to the content covered.”

He sees the opportunity to not only enhance what already is offered to students in the department, but also building it in as a modular component of a new master’s program track they are working on. There are not many schools or programs that do this work, and the people who taught the course are essentially the only ones who do it.

Jolie has been reaching out to professors in other departments and the Seneca Nation of Indians in New York State for potential collaboration. McAllister has expressed interest in collaborating with Jolie and the school, which may lead to internship opportunities for students in the future.

“People don’t appreciate the extent to which the illegal looting and destruction of archaeological sites, and the collection and sale of antiquities that come from state and federal or tribal lands is intimately connected to narcotics — drug trafficking,” Jolie said.

Going into law enforcement classes or to the academy to talk to them about the potential things to look for is something Jolie plans to do.

The men who taught the course Jolie attended have been behind every major antiquities-related sting operation in the U.S in the past 30 years. The classes align with Jolie’s interests, especially those that involve professional practice and the types of concerns that affect the general public.

Jolie believes that what he learned from the course can address inattention to underwater heritage and archaeological sites get in the Erie area. The Anthropology/Archaeology program will now have the opportunity to train students in how to properly document and write up reports on site conditions and damage that can then be used to prosecute people who violate the laws in place at heritage sites.

“This is a skill set that we can offer that provides Mercyhurst students with a competitive advantage,” said Jolie. “Now we can help advise students on proper report preparation that attorneys, federal investigators, are going to be able to take to the court and say, ‘This is what’s gonna get us a conviction.’”

Public land managers have documented noticeable increases in the amount of cases involving damage to archaeological and cultural sites. This correlates with increased exploration of fossil fuels and politicians’ attempts to reduce protections for national parks and monuments. These important sites need protection, and Jolie and the department are trying to seize upon predicted future job growth in the area where people are going to need the expertise in this area if they want to be able to effectively manage state, federal and tribal lands.

“This now gets us thinking about what can we do to be proactive to protect important archaeological sites and cultural heritage sites,” said Jolie. “If we can be the people that they reach out to as a resource or our students working at any number of federal or private agencies can be, then it’s a win-win.”

The knowledge gained from these courses will allow for an enhancement of existing collaborative relationships across departments, as with helping recruit undergraduate and graduate students to Mercyhurst. Collaborations with law enforcement is important when archaeological sites are looted. Everything looters leave behind amounts to evidence that can be used to prosecute cases and potentially get the taken artifacts back to where they belong.