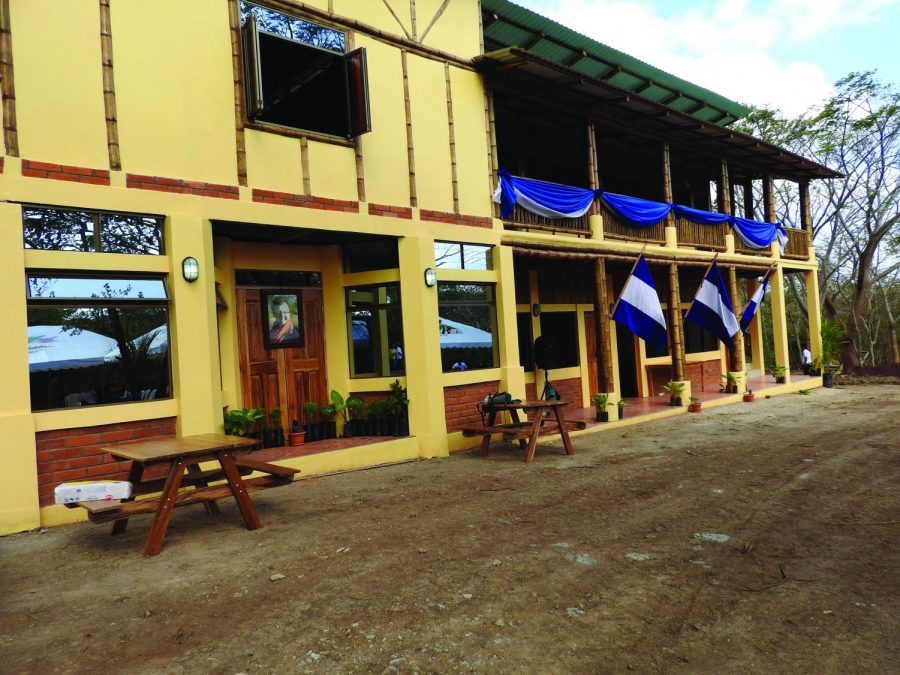 Dreana Ferguson, ’16, a second-year graduate student in the Forensic and Biological Anthropology master’s program, is currently fundraising for Random Acts’ Dreams to Acts: Nicaragua initiative. This is her third time fundraising for this program.

Random Acts is a global nonprofit organization dedicated to conquering the world one random act of kindness at a time, according to its website, randomacts.org. Dreams to Acts: Nicaragua specifically fundraises for the Free High School (FHS) in San Juan del Sur, Nicaragua.

“FHS provides a free high school education to individuals who are unable to attend traditional high school, including women, adults, people who work during the week, people with children and people who live in rural areas,” said Ferguson. “This education empowers individuals to pursue their dreams, gain more independence and break the poverty cycle.”

In 2012, Random Acts fundraised to help the school purchase a bus. In 2015, they fundraised for a Center for Human Development, which became the first building of the Free High School. This round of fundraising is trying to get money to furnish the building, buy equipment and construct a second building in the campus. Random Acts has traveled to San Juan del Sur on three occasions, and Ferguson has attended all of the trips. She said she would like to go back again in February 2018.

“I remember visiting what at the time was the ‘construction site’ for the first time. Austin, the head contractor, walked us through the site with blueprints in hand,” said Ferguson. “He’d point to an area and explain how it would become a classroom, or a library or offices for the teachers. At the time, it was a bit hard to imagine.”

When visiting the school over a year later in February 2017, Ferguson said it was hard to remember what it used to look like.

“I remember (Austin) explaining different approaches he would use. The next day, we visited a health center that his company had previously built. It was absolutely gorgeous. Just looking around at the architecture thinking ‘wow, this is going to work, this campus will be beautiful’ and two years later, it absolutely is,” said Ferguson. “It’s a bit different for us volunteers, because we don’t see the progress day-to-day like the construction team does.”

The school sits on a hill, and Ferguson described the walk up it as a dramatic unveiling.

“We’ll be walking up the hill, remembering what the school looked like when we left, and without fail we are overcome with emotion when we see how different it looks once we reach the top of that hill,” she said. “In July 2016, I remember repeating ‘There are tiled floors!’ ‘There’s a whole second story!’”

Ferguson said on top of visiting the school construction site, there are two other parts to the group’s visit. They spend time in the rural areas of the Newton-San Juan del Sur Sister Cities Project that they partner with to build eco-stoves and bio-sand water filters. The third part to their trip is spent at the Barrio Planta Project, which is a children’s development center.

“BPP is fantastic because it offers these kids a chance to learn, play and be kids, regardless of their socioeconomic status,” she said.

“The play we sponsored was a ‘Nicaraguanized’ version of ‘Pirates of the Caribbean.’ The kids did such as great job and they were so happy and excited. I always love visiting BPP and doing activities with these kiddos,” said Ferguson. “We went to see a performance the same day as the FHS Grand Opening Ceremony. Needless to say, it was an emotional day and night for us.”

The ceremony occurred in February 2017, and the volunteers’ reactions were filmed at the top of the hill. Ferguson said there was not a dry eye around.

“It wasn’t just a construction site anymore. It was a proper, functioning school. I’m so incredibly thankful that I had the opportunity to return to see the grand opening ceremony for the first building. It was a huge celebration, because it was not only the grand opening of the building, but also the first day of school and the 15th anniversary of the Free High School being in operation,” Ferguson said.

During the first trip, in 2015, volunteers were helping to build water filters and eco-stoves, but Ferguson spent the day doing something a little different.

“I spent my day attached to Vilma. Luckily for me, I wore a yellow shirt that day, and yellow is Vilma’s favorite color. At the time she was 6 years old, and insisted she was 60 if anyone asked her age,” said Ferguson. “She stole my hand, my phone and my heart. She loved using my phone to take photos and videos of everything going on. She learned how to take selfies with different filters, and I now have 74 selfies of her on my phone.

“Spending the day with Vilma will always be one of my greatest memories. When the bus returned to take us back to where we were staying, Vilma attached herself to me, buried her head in her hands and started crying. Leaving her that day was heartbreaking.”

Ferguson said it has always been clear to her that she is doing this for kids like Vilma.

Ferguson explained she found out about Random Acts through a friend who volunteered for their previous project building a children’s center in Haiti.

“When she came back home, she could not say enough positive things about the experience and about Random Acts as a whole. As for the Dreams to Acts project, I was drawn in because I strongly believe in increasing access to education in any way possible,” said Ferguson. “I’ve dealt with fighting to continue my education, albeit on a smaller scale, due to both financial issues and chronic illness. I know how stressful the question of ‘How will I pull off getting back to school?’ is for me most years, and I know how incredible it feels for me when I’m able to return.”

“We have big dreams. They include longer term goals of having an on-campus daycare center, of building an auditorium, of making this campus a university and more,” Ferguson said.

Although Random Acts originally planned to raise funds for the first two buildings, there may be continued involvement.

“Two fellow volunteers and I are currently having discussions with Random Acts, as well as the organizations we work with in Nicaragua, to figure out what we’re going to do moving forward,” said Ferguson. “Personally, I do plan to continue fundraising and doing everything I can to support the growth of this campus.” 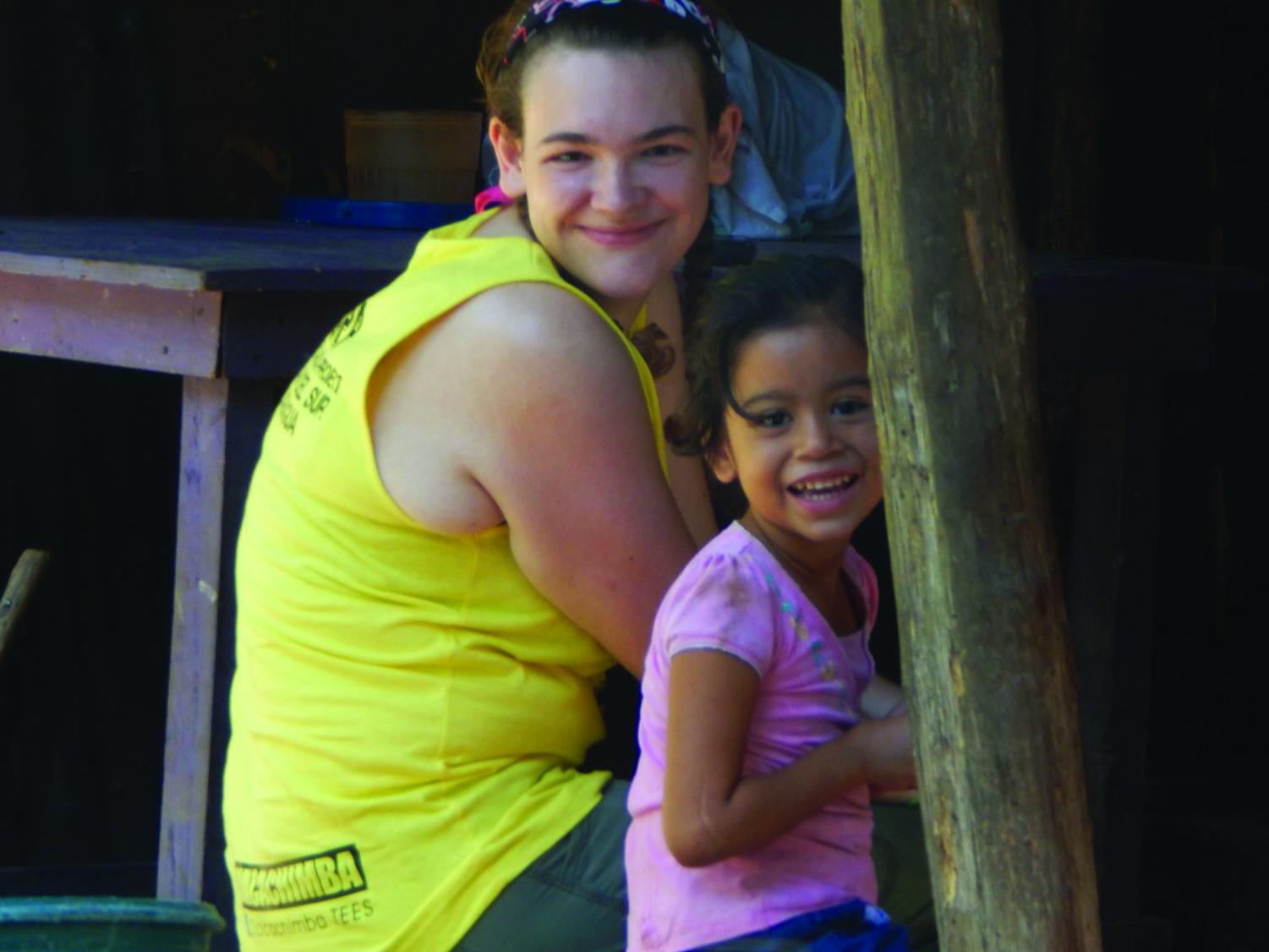 Contributed
You can donate to Ferguson’s CrowdRise page at https://www.crowdrise.com/dreams-to-acts-
nicaragua-2017/fundraiser/dreanaferguson.