‘Guys and Dolls’ was a success 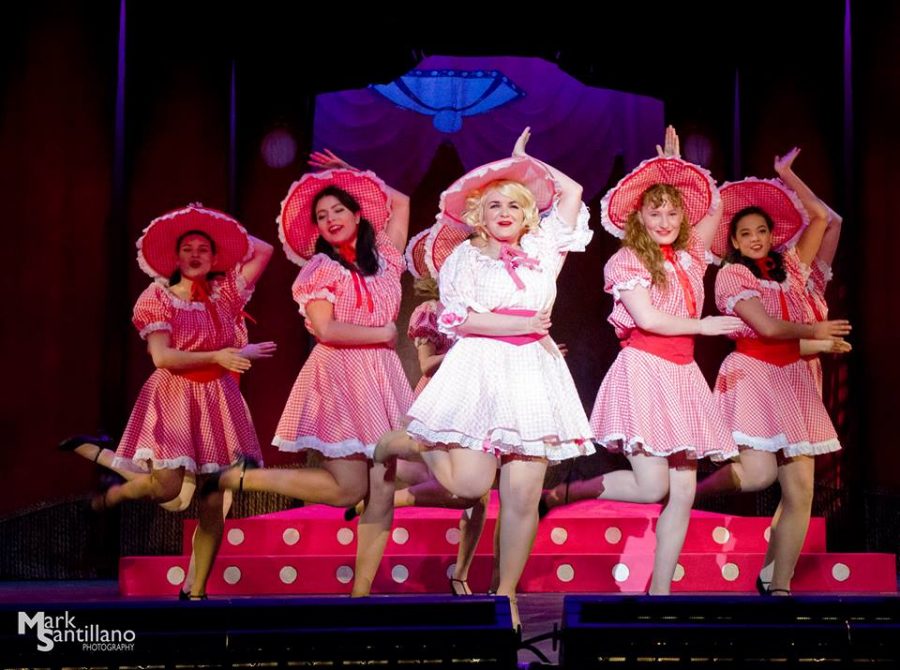 A few of the “dolls” from “Guys and Dolls” are led by Miss Adelaide, who was portrayed by senior Sarah Krempasky. They were performing a number at the Hot Box, one of the settings in the musical.

This past week, Nov. 2 through 5, huge crowds were drawn to see “Guys and Dolls,” a joint effort of the Mercyhurst Theater program, Dance department and Music department, in the Mary D’Angelo Performing Arts Center.
Director, Brett Johnson, Ph.D., called the show “the perfect collaborative project for Theatre, Dance and Music because of the large cast, extensive use of dance and intricacies of Frank Loesser’s immortal score, which includes toe-tapping musical numbers like ‘Luck Be a Lady’ and ‘Sit Down, You’re Rockin’ the Boat.’”
The show “provides opportunities for students in each department to showcase their strengths while also learning from each other,” said Johnson.
“Guys and Dolls” is a lively musical comedy from the 1950s, in which Nathan Detroit (portrayed by junior Owen Hitt), desperate for money, bets Sky Masterson (sophomore Jacob Tretinik), the charismatic gambler, that Sky cannot take the uptight missionary Sarah Brown (graduate student Jillian Johannes) to Havana.
From there, hilarity, romantic drama, music and dancing ensue.
The show is heavily reliant on dance numbers, which were put over well by the dancers, under the direction of choreographer Mark Santillano, and the 15-member pit orchestra.
The show featured a cast and crew of more than 50 students, and in fact in many respects is the largest theatrical production Mercyhurst has recently done.
Lavish costumes and bright backdrops, sets and props masterfully conjured the aura of New York City in the 1950s, and crowds filled the Performing Arts Center — a change from the typical theater venue, which is the small Taylor Little Theater.
And yet, even with so many characters and so many things going on onstage, the show did not lose focus.
Characters stood out from each other, and the plot was easily distinguishable.
The story is a feel-good tale of love triumphing over all.
It’s an old idea, but the cast and crew gave it new life.
The show is bright and fun, and pleasing to the eyes and ears.
Music, setting and actors all combined to create a cheerful mood for this fun show.
The characters are likable and easy to root for, and the ending leaves audiences feeling good.
“Guys and Dolls” is a beloved show with a long history, and Mercyhurst may hold its head high, having done its part to uphold its legacy.