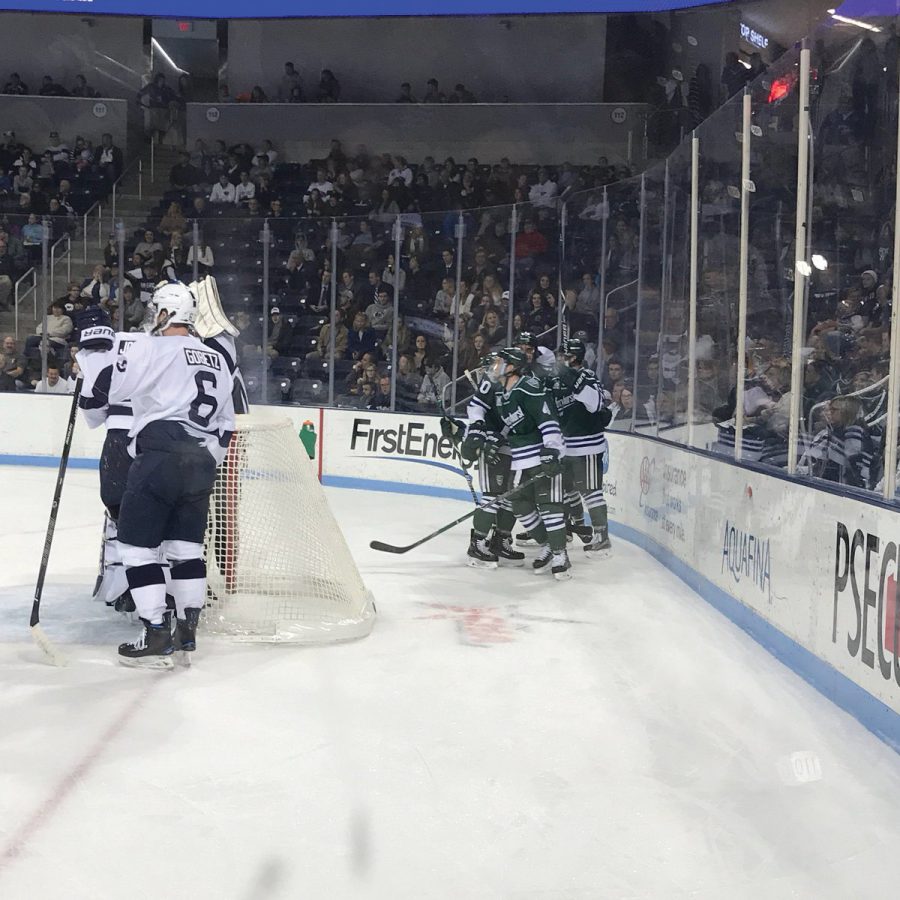 Lakers huddle behind the Penn State net. The Lakers won 7-4 against Penn State on Nov. 3

The Mercyhurst Lakers men’s ice hockey team has split with its opponent once again.  After taking down the Nittany Lions in a high-scoring affair on Nov. 3, the Lakers fell the next night in another high-scoring game.  The Lakers took down the 17th-ranked Penn State Nittany Lions with a final score of 7-4 on Friday night.  The Lakers started strong, taking a 3-0 lead in the first period.

The Laker lead started with a goal from Jonathan Charbonneau (assisted by Derek Barach and Jack Riley) only 13 seconds into the game.  Charbonneau’s goal was followed by goals from Joshua Lammon and Zach Todd (both goals were assisted by Les Lancaster).  They weren’t able to keep the lead going into the first intermission. Penn State managed to get 2 goals on the board.  In the second period, Todd netted his second of the night (assisted by Lammon and Best), giving the Lakers a 4-2 lead.

“We did a lot of the details right tonight,” said Lancaster, reflecting on the Lakers win.  Lakers goaltender Brandon Wildung recorded 50 saves in Mercyhurst’s 7-4 win in front of a sold-out crowd at Pegula Ice Arena.  Saturday’s game was another high-scoring affair for the Lakers and the Nittany Lions.   Unfortunately, the Lakers couldn’t pull through for the win.  Penn State managed to get on the board first by scoring at 2:33 of the first period.  Halfway through the first, Riley got the Lakers on the board to tie it at one (assisted by Todd and Barach).  A minute and a half later, Best managed to find the back of the net and give the Lakers their first and only lead of the game.

Early in the second, the Nittany Lions were up 4-2.  Late in the second period, Lammon seized a power-play opportunity, bringing the Lakers within one.  A quick 46 seconds later, Penn State capitalized on an opportunity, making it a 5-3 game.  Todd scored (assisted by Elliot) at 6:17 of the third period, bringing the Lakers back within 1.  At the halfway point of the third period, Elliot tied the game 5-5 with assists from Barach and Best.  The Nittany Lions netted 2 goals before time expired, giving them a 7-5 win over the Lakers.  Wildung had another 50-save game.  “I thought we had a pretty good weekend, but today is pretty disappointing,” Lammon said after Saturday’s game.

The Lakers return to the ice at home, hosting Canisius College for two games Nov. 10-11.  It will be the first time this season that the Lakers play at home in the Mercyhurst Ice Center.