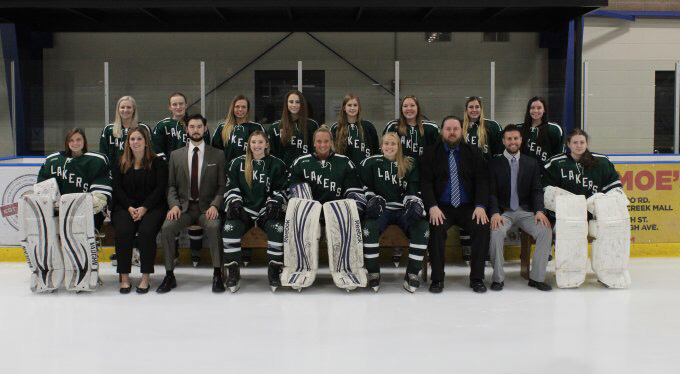 2017 marks the first year that Mercyhurst University has had a women’s hockey team that is active at a non-NCAA level.  Mercyhurst does have two varsity programs on campus, the NCAA Division I men’s and women’s hockey programs.  However, the women’s club team is an additional program that competes in the College Hockey East (CHE) League as an affiliate member this season with plans to become members of the American Collegiate Hockey Association (ACHA), a national governing body for intercollegiate ice hockey teams next year.  Many teams on the ACHA level are varsity teams playing for schools that do not carry varsity programs.

Coach Thomas McKinnon and members of the team shared their thoughts on the team’s progress and goals for the future.  Megan Young is a sophomore Competitive Business Intelligence major recruited from Davenport University for the team.  “When people think club, they think rec league where anyone can join, and athletes don’t practice as much,” said Young.

“But  our team requires a specific level of commitment where we get recruited for it, just like the NCAA. We still have to travel to games and we wear gear sponsored to us. Club sports have members join whenever, whereas ACHA we work to be here, and we are going to be competitive.”

The team’s roster currently consists of three goalies, four defensemen and six forwards.  “Six girls are on the ice at the same time — a goalie, two defensemen and three forwards,” said McKinnon. “We have just the number of girls ready to relieve that first set of girls shift to shift.”  While this means a shortened recovery time between shifts, it also means more time on the ice for each player and more pressure to give it their all.  “As a freshman I think getting all this ice time is good because I know people who have gone to other places and complain about not getting enough ice time,” said Meghan Roche, lead scorer and a Biology major.

The team not only provides a support system for athletes but also an opportunity for players who may not be the best of the best.  There are a limited number of spots on NCAA teams, but ACHA players are players who have competitive hockey experience and want to continue through their collegiate experience.  While the transition to college can be tough for any student, freshman Haley VandePol felt confident about Mercyhurst.  “While looking at universities in Canada, the college sports scene is very different there, so I don’t think I would have been able to have a chance,” said VandePol, a Criminal Justice major. “It’s good to come down here, and I still get to play at the same competitiveness that I did last year in high school.”

Emily Bauer, an on-campus recruit, is a senior studying Interior Architecture & Design.  “When I come back as an alumni, I want to see the team move up to a DI women’s ACHA team and eventually make it to the national champions.”  Currently, there is only a DII team for the women.  Winning their most recent game on Nov. 6, 12-0 against the Rochester Institute of Technology, the team continues to strive to build up individual team skills this year and instill a championship culture and mindset for the future.  Lakers can come support the women’s club team by coming to games and by checking them out on Facebook and Twitter (@ muachawhky).