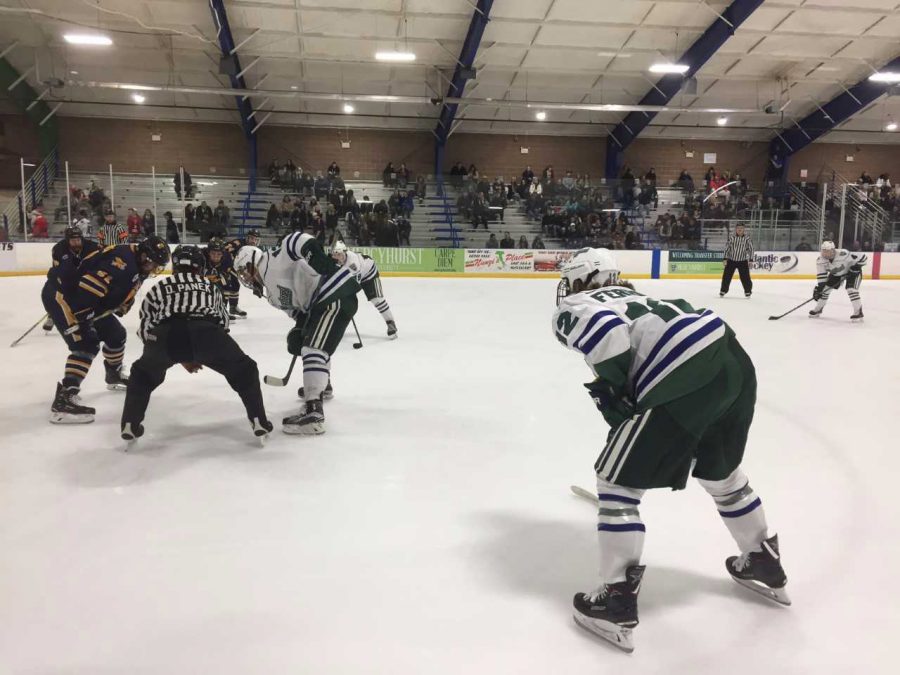 Senior Nathan Ferriero looks on as the Lakers and the Golden Griffins get ready for the puck to drop.

The Lakers’ first Atlantic hockey home games of the season resulted in another split series against the Canisius College Golden Griffins at the Mercyhurst Ice Center.  The Lakers won Nov. 10 in overtime but couldn’t keep their momentum going into the next day and fell to the Golden Griffins 7-3.  “We just want to use that confidence that we gained playing at Penn State and take that into the game against Canisius,” senior redshirt forward Jack Riley said before the team hit the ice for Friday’s game.  The Lakers managed to translate that confidence into an overtime win.
Nathan Ferriero (assisted by Joseph Duszak and Bryan Sienerth) scored the first goal of the game during the second period, putting the Lakers up on the board 1-0.

Just two short minutes later, the Golden Griffins answered with a goal, making it 1-1.  With 1:48 left in the second, the Lakers took the lead again. Joshua Lammon brought the puck into the Canisius zone and passed it up to Wes Baker.  Baker iced the Laker’s second of the game, giving the Lakers a 2-1 lead.  The Lakers had just finished killing their minor penalty when they found themselves quickly back on the penalty kill for a five-minute major.  This penalty resulted in two Griffin goals in 39 seconds. The Golden Griffins took the lead 3-2.  Jonathan Charbonneau (assisted by Derek Barach and Duszak) then capitalized on an empty-net opportunity with 1:25 remaining in the third, tying the game at three.

At the final buzzer, the Lakers and Golden Griffins were headed to overtime.   At 2:01 into overtime, Barach managed to find the back of the net, leading to a Laker victory.  After winning 4-3 on Friday, the Lakers unfortunately fell to the Golden Griffins in a 7-3 loss on Saturday night.  A short 17 seconds into the first period, Canisius’ Dylan McLaughlin found the back of the net, giving the Golden Griffins an early lead.  The Lakers’ Nathan Bryer evened the score three minutes later, while recording his first collegiate goal.  Later in the first period, Charbonneau netted one in, giving the Lakers a 2-1 lead.

Not three minutes later, Canisius’ McLaughlin scored his second of the game, tying the game at two.  The Lakers took the lead back for the final time with 51 seconds remaining in the second period.  Duszak found the back of the net, putting the Lakers up 3-2. The lead did not last long, though.  Within the first five minutes of the third period, McLaughlin completed his hat trick to tie the game for the Golden Griffins.

The Golden Griffins then went on to score four more goals in an eight-minute span.  The last goal of the game was an empty-netter scored at 1:29 in the third.  This brought the final score to 7-3, Golden Griffins.  Although the Laker loss was disappointing, Bryer was excited about his first collegiate goal.   “That was awesome,” said Bryer. “It’s one of those things that I’ll probably never forget.”  The Lakers take on the University of Wisconsin on the road Nov. 25-26 for a two-game non-conference series.