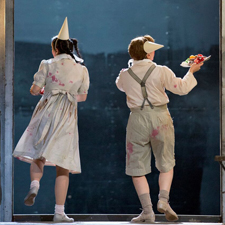 MIAC brings ‘Hansel and Gretel’ to the PAC on Dec. 9.

Just in time for the holiday season, the Mercyhurst Institute for Arts and Culture (MIAC) is streaming an encore performance of “Hansel and Gretel.”
The fairytale classic was performed on Jan. 1, 2008.
This special event will be played at the Mary D’Angelo Performing Arts Center on Dec. 9 at 12:55 p.m.
Doors will open at 12:30 p.m.
“Hansel and Gretel” was composed by Engelbert Humperdinck, a German composer. This opera was his first completed work, and it is what formed his reputation.
The librettist for this opera was actually Humperdinck’s sister, Adelheid Wette.
The opera was based on the Brothers Grimm version from 1812.
The opera is about the unfortunate adventure of brother-and-sister duo Hansel and Gretel.
After goofing off all day, they are told by their mother to go into the forest to pick strawberries.
After they leave, their father arrives back to inform their mother about a witch in the forest.
The children end up staying in the forest. Eventually, Hansel and Gretel stumble upon the witch’s gingerbread house and begin eating it.
Misadventure unfolds from there.
The opera is set in three different scenes.
The first is at the children’s home, the second is set in the dark forest and the third is in the witch’s gingerbread house.
The setting starts out real and, as the opera progresses, moves into the surreal and make believe.
Humperdinck’s scores are charming and sophisticated.
He also uses real folk songs among his own music.
The music becomes more sophisticated over the course of the play, just as the children grow up.
Vladimir Juroswski is the composer for the 2008 performance that will be shown.
The cast for the performance includes Christine Schafer as Gretel and Alice Coote as Hansel. Gertrude is played by Rosalind Plowright, Philip Langridge portrays the Witch, and Alan Held is Peter.
As always, tickets are free for Mercyhurst students, $18 for an adult ticket, $15 for seniors and students of other institutions and $10 for youth.