Global Summit coverage: An evening with a historian 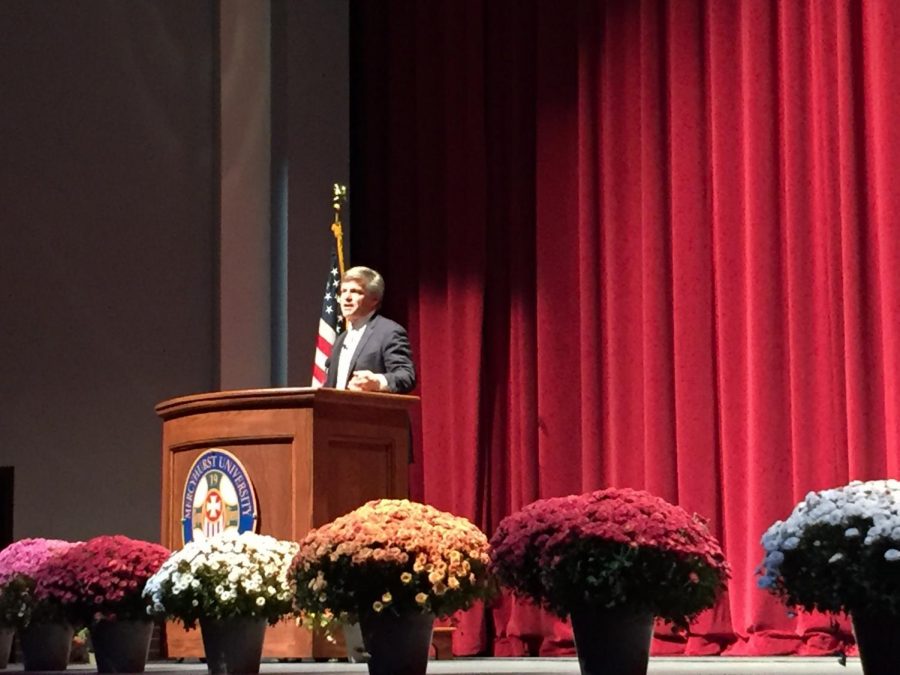 Brinkley, a CNN presidential historian and professor of history at Rice University, began his lecture introducing the audience to a lesser known but extremely important founding father: Charles Thompson, secretary of the Continental Congress. Brinkley brought up this dynamic but forgotten man because Thompson hoped to prevent a very relevant issue of today’s political scene: an extremely polarized two-party system.

“The problem I find haunting our country right now is what Thompson was talking about in the election of 1800: We are in permanent campaign warfare mode,” said Brinkley. “We are constantly running and nobody is serving.”

This idea of what makes a good president in the midst of party polarization led into Brinkley’s theme for the evening as he expanded on the fascinating and often tumultuous history of the United States presidency.

“We are obsessed with the presidents,” said Brinkley. “We celebrate this group of common heroes in books, movies and holidays. It’s just what we do in this country.”

Brinkley then engaged the audience at the D’Angelo Performing Arts Center in a deeper look into the presidents as he selected a key few and their highs and lows, resulting in how they have made their mark on America throughout the years.

Abraham Lincoln is one of the most celebrated and revered presidents of our history, having to pull the United States back together where it was nearly torn in half by the Civil War. Brinkley noted that it was Lincoln (a Republican) who would begin a long line of Republican presidents that would dominate the White House until the late 19th century.

Theodore Roosevelt, in Brinkley’s eyes, “defined the U.S. presidency in action” with his conservation efforts and an increase in government action with the spirit of the strength of America.

Later, Franklin Delano Roosevelt, known for his famous words “We have nothing to fear but fear itself,” ushered in the era of compassion with his tenacity in bringing the United States out of the Great Depression and through WWII in spite of contracting polio in 1921.

Modeling much of his presidency after Theodore Roosevelt before him, FDR’s attitude of “the federal government is your friend” made way for Harry Truman, Dwight Eisenhower, John F. Kennedy, Richard Nixon and Jimmy Carter to institute many government agencies and policies under a Democratic era that Brinkley calls “The Age of Roosevelt.”

“The Age of Reagan,” beginning in the 1980s and continuing through George H.W. Bush, Bill Clinton, George W. Bush and Barack Obama, brought a new presidential philosophy to the forefront: suspicion of the government. Political scandals and assassinations began to convince Americans that the government was no longer their friend, as it was in FDR’s time.

This led Brinkley to the current president, Donald Trump, and the political scene that has created an extremely polarized country.

“Is it that the Reagan Era is completely over and there is this new era with Trump? We just don’t know yet,” Brinkley said.

Brinkley noted that it is still too early into Trump’s presidency to declare whether it is successful or what kind of president he will be known as. It is not until about 25 years after a president has left office that any research or behind-the-scenes accomplishments or scandals come to the public eye for evaluation.

“Our politics are broken, our media is broken, but our vitals are pretty good,” said Brinkley. “There is still a lot to be proud of, but with broken politics, we are playing a very dangerous game here.”

Brinkley ended the evening with a question-and-answer session moderated by C-SPAN senior executive producer Steve Scully, discussing his current books “JFK: A Vision for America” (2017) and “Rightful Heritage” (2016), his work with “The Majic Bus” cross-country experience and book, his friendship with Rosa Parks and the importance of the Battle of Lake in the War of 1812.

Brinkley is the author of other numerous books on American history, including “The Great Deluge: Hurricane Katrina” (2006), “The Wilderness Warrior: Theodore Roosevelt and the Crusade for America” (2009), “The Reagan Diaries” (2007) and “The Nixon Tapes” (2014).