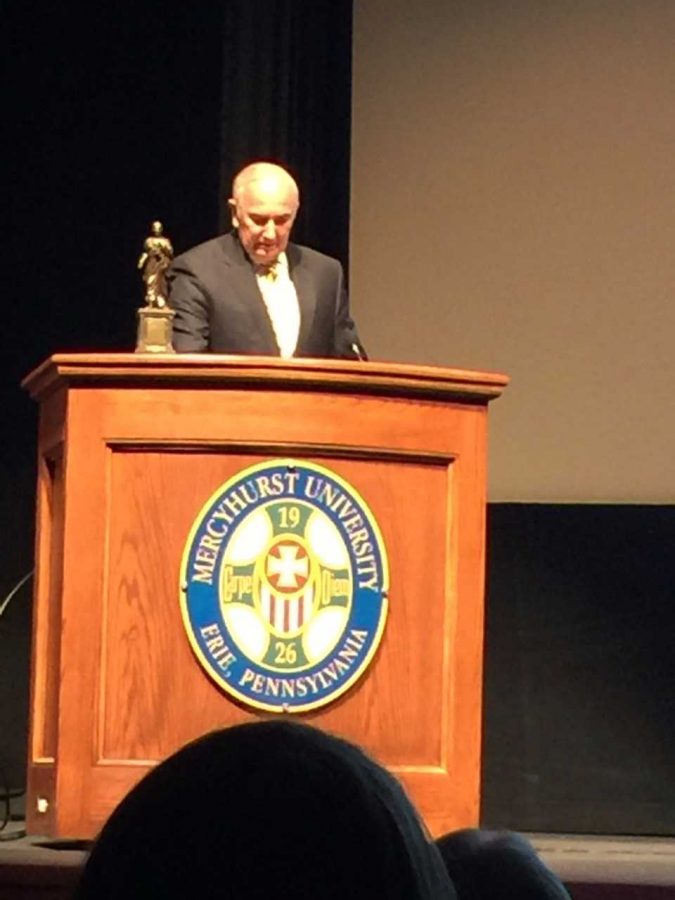 The Jefferson Educational Society’s ninth Global Summit was capped off with a talk by Lt. Gen. James Dubik on Nov. 17 on the “Pre-Something Period.”

Dubik, before began his talk, was named as the recipient of the 2017 Thomas B. Hagen Digitas Award. Dubik has dedicated his entire life to public service, which includes his many years in the United States military.

The Thomas B. Hagen Digitas Award is always given to the last speaker of the Global Summit. This award is given to an Erie citizen or native who has made a significant contribution to the vitality of American democracy.

Dubik began his talk by mentioning the shift, beginning in 1750, from muscle power and an agrarian society to one dependent on machines and technology. He also mentioned the many revolutions that have happened over the past few centuries, such as the American, French and Russian revolutions that helped bring about these changes.

“Some people fight to preserve the old, others fight to bring in the new,” Dubik said.

Dubik then moved on to life during and after the Cold War and how it has served to impact the world. After it ended, the internet quickly came about, which has led to the Information Age.
America has formed partnerships for peace, expanded NATO and made alliances with former members of the Warsaw Pact.

“We’re now in a post-9/11 period. We’ve been at war for 16 years now, not only in Iraq and Afghanistan, but across the world,” said Dubik. “We’re now living in an unsettled world, a pre-something period. We don’t know what that is yet.”

America is currently having to face revisionist, revolutionary and rogue powers. The revisionist powers are Russia, China and Iran.

“They’re revisionists because they seek to influence the world to their advantage,” Dubik said.

They want to revise the international order so that they can gain from it. Russia is trying to re-establish its influence, from the era of the Warsaw Pact.
China has protective missile zones and is planning a One Road initiative.

“China seeks to create an economic zone from the Pacific all the way into Europe,” Dubik said.

China want the Chinese economic model to be dominant. It wants this to replace the World Bank and the Western powers’ hold on economic development.

Iran is sponsoring terror organizations and aiming to develop cyber capacity, among other things. The revolutionary powers are al Qaeda and ISIS.

“They wish to replace existing governments by force with ones of their choice,” Dubik said.

They do not like governments that do not follow their version of the Quran. They want to establish a global caliphate. Al Qaeda has expanded quite a bit from 2000 to 2017.

“Isis in 2000 was nowhere,” said Dubik. “ISIS and al Qaeda are now competing with each other.”

The rogue power is North Korea.

“They just want to promote instability to their advantage,” Dubik said.

North Korea is aiming to use nuclear weapons for its survival.

Dubik followed up by bringing up the need for a new international order because the current one likely cannot be sustainable anymore.

“The actions that we take will determine, positively or negatively, the outcome of the next international order,” Dubik said.

Dubik ended his talk by addressing what steps may be taken to create a more stable world. America needs to compete with the revisionist powers in a neutral manner, as neither enemies nor friends.

“We can’t withdraw from the international world, that cedes leadership to others,” Dubik said.

The revolutionary powers must be defeated in a way that prevents them from reconstituting to a level that threatens the world. Transnational cooperation will be instrumental in stopping them.

All of the tasks America needs to fulfill require help from allies because they cannot be solved alone. America likely needs the assistance of Russia and China to solve these problems.

“Nothing is written unless we write it,” Dubik said.

However, America must get to writing. The new international order must form conditions that promote peace rather than creating an environment that promotes more wars.