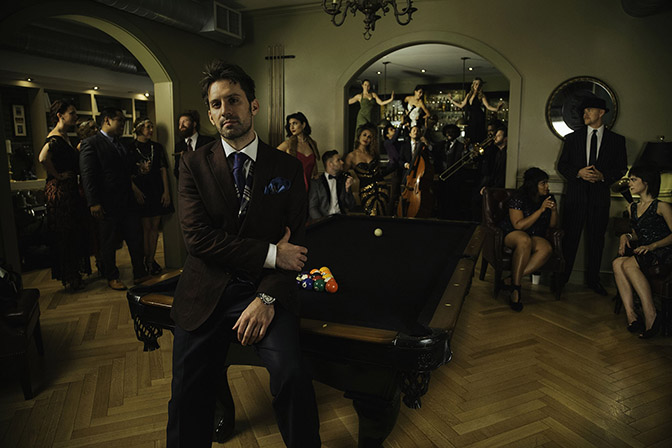 Scott Bradlee’s Postmodern Jukebox will be at the Performing Arts Center on Jan. 23 at 7:30 p.m.

The Mercyhurst Institute for Arts and Culture (MIAC) will present Scott Bradlee’s Postmodern Jukebox on Jan. 23 at 7:30 p.m. in the Mary D’Angelo Performing Arts Center.
This performance is part of the 2017-18 MIAC Live season, and the first MIAC Live performance of the spring semester.
Postmodern Jukebox is a world-renowned performance group known for rearranging some of the era’s most popular songs into vintage genres such as jazz, ragtime and swing.
Postmodern Jukebox frontman Scott Bradlee is a native of Queens, New York.
The project began when Bradlee and his close friends began filming videos in his apartment.
Following his college career, Bradlee struggled as a jazz musician for years.
His breakthrough arrived after he uploaded one of his videos to YouTube and famed author Neil Gaiman tweeted about it.
This quickly became Bradlee’s first viral video.
Following the video’s success, Bradlee uploaded another one in 2011.
This video was a Motown-style tribute to Canadian music group Nickelback.
It was also Bradlee’s first collaboration with some of the future members of Postmodern Jukebox.
Postmodern Jukebox’s first viral music video was a cover of Macklemore & Ryan Lewis’ “Thrift Shop.”
It received over 1 million views within its first week.
Their next viral music video was a cover of Miley Cyrus’ “We Can’t Stop,” which earned the group a spot on “Good Morning America.”
Postmodern Jukebox has since released 14 albums, all of which have topped the iTunes charts.
Some notable songs the group has covered include Bastille’s “Pompeii,” Taylor Swift’s “Shake It Off,” Rihanna’s “Umbrella,” The Chainsmokers’ “Don’t Let Me Down” and Avril Lavigne’s “Complicated.”
The group has collaborated with several artists for these covers, such as “American Idol” finalist Casey Abrams.
Postmodern Jukebox uploads new music videos to YouTube weekly.
The YouTube channel currently has approximately 9 million views and more than 3 million subscribers.
Postmodern Jukebox has performed several sold-out live shows around the world.
The performers’ unique musical and visual elements help them stand out among other groups.
“Audiences can expect an energetic vaudevillian variety show atmosphere featuring retro spins on pop and rock songs, virtuosic vocals, rowdy tap dancing, and lots of silliness, all presided over by an emcee,” said MIAC director Brett Johnson, Ph.D.
“The show, with its vintage look and style, is more cabaret than concert.”
Postmodern Jukebox is sure to bring something to the table for all ages.
For example, the elements of vaudeville and vintage music may appeal more to the older audience members.
On the other hand, however, the songs themselves may appeal more to the younger audience members.
“I think one of the strengths of Postmodern Jukebox is their cross-generational appeal,” Johnson said.
This is a highly anticipated performance that is selling out quickly.
Tickets are free to Mercyhurst students with their ID. They are $30 for adults, $25 for seniors and $20 for students and youth.