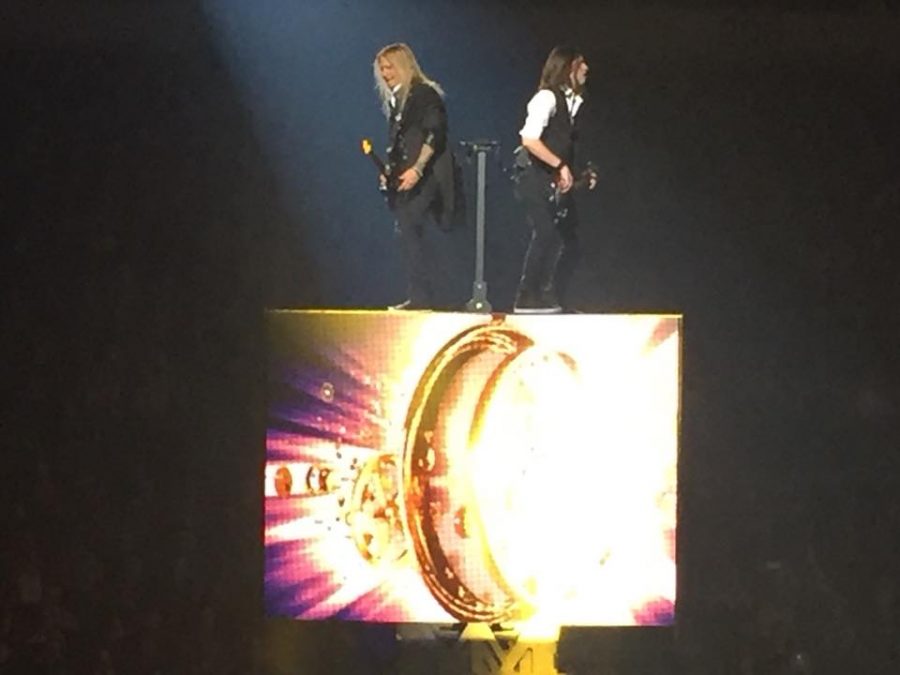 Two of the members of the Trans-Siberian Orchestra perform at Erie Insurance Arena on Nov. 16.

On Nov. 16 at Erie Insurance Arena, the Trans-Siberian Orchestra (TSO) kicked off its 19th annual holiday tour.
This year’s tour was called “The Ghosts of Christmas Eve.”
Every year, the orchestra starts its month-and-a-half-long tour around the country.
The Trans-Siberian Orchestra consists of two bands, one on each coast, and sometimes each will play two shows in one day, totaling over 100 performances.
For each performance, the orchestra donates $1 of every ticket sold to a local charity.
This year, TSO donated more than $4,000 to Emma’s Footprints and Hamot Health Foundation’s Children’s Care Fund.
Not only does the orchestra donate to the local community, but part of the orchestra consists of the local community.
TSO brings along their vocalists, narrator, guitarists, pianists, drummer and one violinist.
However, the string section of the orchestra was made up of musicians from the Erie Philharmonic.
The performance consisted of two parts. The first part was a Christmas story.
The narrator told the story of a girl who ran away from home and stumbled into an old theater on Christmas Eve.
Through some sort of magic and the help of an old gentleman, possibly a ghost, she was shown images of Christmas pasts, and eventually given the means to return home.
The senses of the audience were continuously stimulated from the first note until the final applause.
As the narrator conveyed the story in words, the orchestra lit up the stages with laser lights, fire and a tremendous amount of visual effects.
Added to that was the sound of the string section, the vocalists and the band.
The second section of the performance was a mix of songs, new and old, that the TSO enjoyed playing.
One song was even dedicated to their founder, Paul O’Neill.
After the performance was over, the members of TSO stuck around to sign autographs for those wishing to stay and meet them.