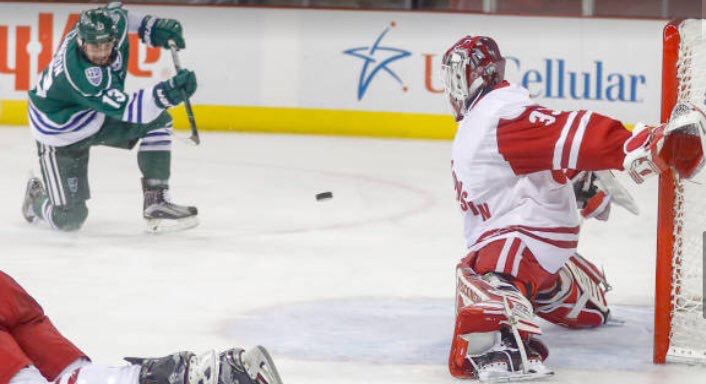 Josh Lammon slaps a shot at Wisconsin’s Kyle Hayton. Lammon and the Lakers ended up splitting the series with the Badgers.

Men’s hockey headed to Madison, Wisconsin, for Thanksgiving break to take on the ninth-ranked Wisconsin Badgers.  The Lakers split the series yet again, returning home with a win and a loss.
Saturday’s game was a bit of a landmark for the Lakers, resulting in the first win over Wisconsin in Mercyhurst hockey history.  Early in the first period, the Badgers capitalized on an opportunity and scored, giving the Badgers a 1-0 lead.

However, the second period saw James Anderson redirect a shot from Michael Verboom to connect with the net, tying the game at 1-1.  Early in the third, Seamus Malone (assisted by Will Johnson) scored for the Badgers, regaining their lead at 2-1.  It was only a short two minutes and thirty seconds later that the Lakers answered with a goal from Bryan Sienerth (assisted by Taylor Best), making it a 2-2 game.  Later in the third period with 6:46 remaining, Josh Lammon found the back of the net off of a pass from Best, also assisted by Todd.  Lammon’s goal gave the Lakers their only lead of the game, which stuck as time expired.

The Lakers walked away with a 3-2 victory over the Badgers.  “A huge win for the team,” said Lammon following Saturday’s game.   Laker goaltender Brandon Wildung finished with 35 saves.
The Lakers and Badgers returned to action on Sunday.  Despite the success of the day before, the Lakers could not manage to keep their momentum going and fell 4-2 to the Badgers.  Mercyhurst managed to get on the board first when Nathan Bryer (assisted by Chris Makowski and James Anderson) found the back of the net late in the first period.

The Badgers answered the Lakers goal early in the second period where they were able to capitalize on a power- play opportunity.  Later in the second, Malone of the Badgers found the back of the net for a 2-1 lead.  Wisconsin strengthened their lead in the third period to 3-1 after a goal by Cameron Hughes.  The Lakers answered quickly to the Badgers goal. A short 52 seconds later, Anderson (assisted by Verboom) found the back of the net making it a 3-2 game.  Immediately following Anderson’s goal, the Badgers seized an opportunity for a shot and successfully connected for the score.  From here, the Badgers took a 4-2 lead that remained until expired.

Lakers goaltender, Brandon Wildung finished the night with 41 saves for Mercyhurst.  “We are very proud of our guys,” said head coach Rick Gotkin, reflecting on Saturday’s win, as well as the wins over Penn State and Canisius.  The Lakers return home to the Mercyhurst Ice Center on Dec. 1-2 for an Atlantic Hockey match-up against Sacred Heart.  The Lakers are now 5-5-2, having split with their last five opponents. In the Atlantic Hockey Association, the Lakers are 2-2-2.Sacred Heart is 3-9-2 and 1-6-2 in the Atlantic.