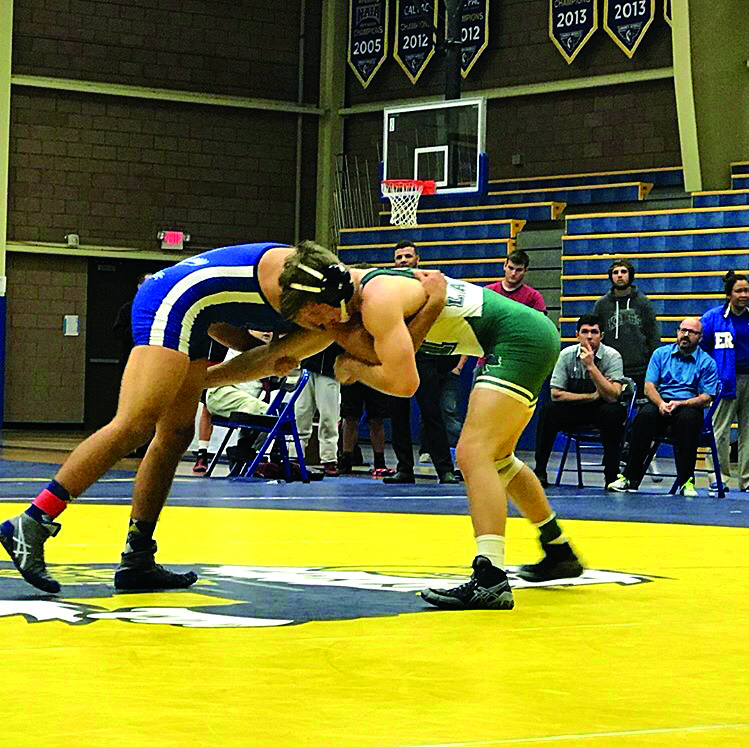 Owen Watkins grapples with an opponent from Embry-Riddle Aeronautical University.

Nov. 17-19, the Mercyhurst wrestling team competed in the Embry-Riddle Aeronautical Mile High Open and a tri-meet duel against Embry-Riddle Aeronautical University and Sierra College in Prescott, Arizona.   When asked about the trip, team coach Mike Wehler said “it was a lot of fun.”  “Anytime you can get a team together where it is just them for four or five days is a good bonding experience, and we stayed busy with a lot of activities after wrestling was over, so we had a great time,” he said.

The Lakers claimed seven out of 10 bouts against Embry-Riddle and won all 10 bouts against Sierra College, just two points shy of a perfect 60-0 perfect match.  Freshman heavyweight Jacob Robb at 285 lbs and redshirt freshman Eric Bartos at 125 lbs both scored individual titles at the open tournament on Saturday.  Bartos and Robb were the highest placing Lakers who claimed a spot on the podium for Mercyhurst.

Senior Kevin Kinyua at 141 and junior Logan Grass at 149 were both runner-ups. Sophomore Trevor Johnson at 174 claimed third place, sophomore Jeffrey Sisk at 133 took fourth. freshman Gavin Wilkerson at 165, and sophomore Zach Breeden at 174 both took fifth.  The team got to experience Arizona outside of wrestling.  “We went to the Grand Canyon, which was probably the highlight of it,” Wehler said.

The team also had a chance to tour Arizona State and Tempe for a day  “There was a little mountain that we hiked at the end of the day that had a pretty neat view. You could overlook all of Tempe,” Wehler said.

After such an exciting trip, the team is ready to take on the rest of the season.

“It’s obvious we got some stuff to work on but the good thing is that it’s early in the season and we got a while to adjust some things and get ready for the regular season,” Grass said.