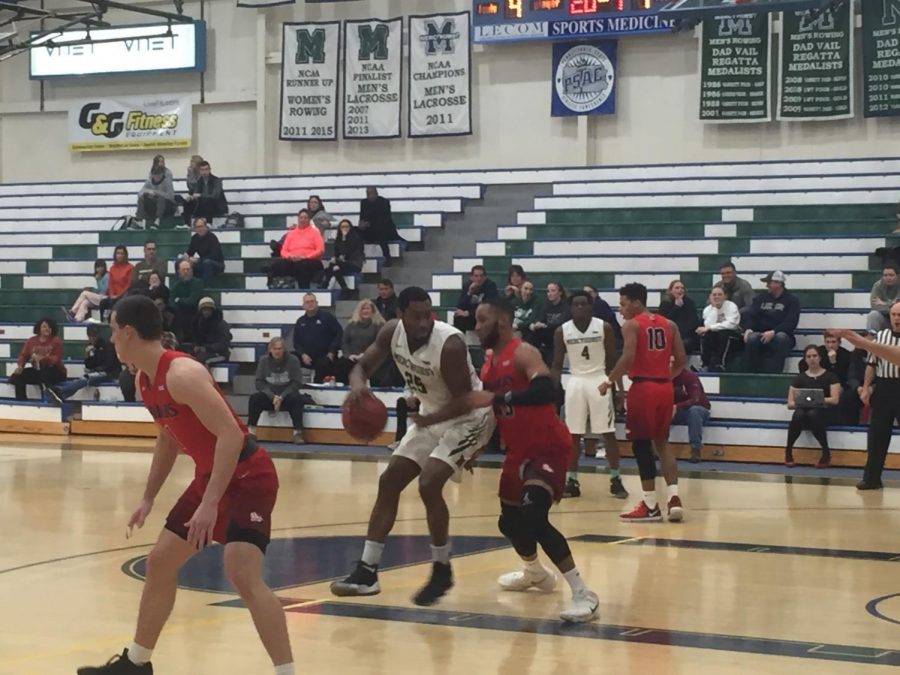 The Lakers’ Patrick Smith pounds the ball in the paint Feb. 3.

The Mercyhurst women’s basketball team started strong but failed to hold the lead, resulting in a 85-78 loss to the Shippensburg University Red Raiders on Feb. 3.  Unfortunately, the men’s team fell in the second game of the doubleheader to the Red Raiders 66-56 to round out the Pennsylvania State Athletic Conference (PSAC) action.  Mercyhurst took the lead within the first two minutes of the game with a basket from Lauren Lapertosa. The Lakers held their lead for the remainder of the first quarter, but the Red Raiders came back and took the lead in the second quarter.  The Red Raiders would then carry the lead until time expired.

For the Lakers, Maria Lapertosa led the team with 16 points.  Emilee Norris managed to record her third double-double of the season, with 13 points and 11 rebounds.  Amber Renz and Lauren Lapertosa contributed 13 and 12 points respectively to round out the top for the Lakers.

Although the Lakers fell to the Red Raiders on the final scoreboard, they managed to out-rebound them 43-35.  The Lakers also claimed 24 points from nonstarting players, while the Red Raiders claimed zero.  “This game was a speed bump for us,” said Laker Stephanie Petery. “(But) if we buckle down and really focus, we can win our next few games and still have a chance at a spot in the PSAC playoffs. We are all staying positive for our upcoming games.”