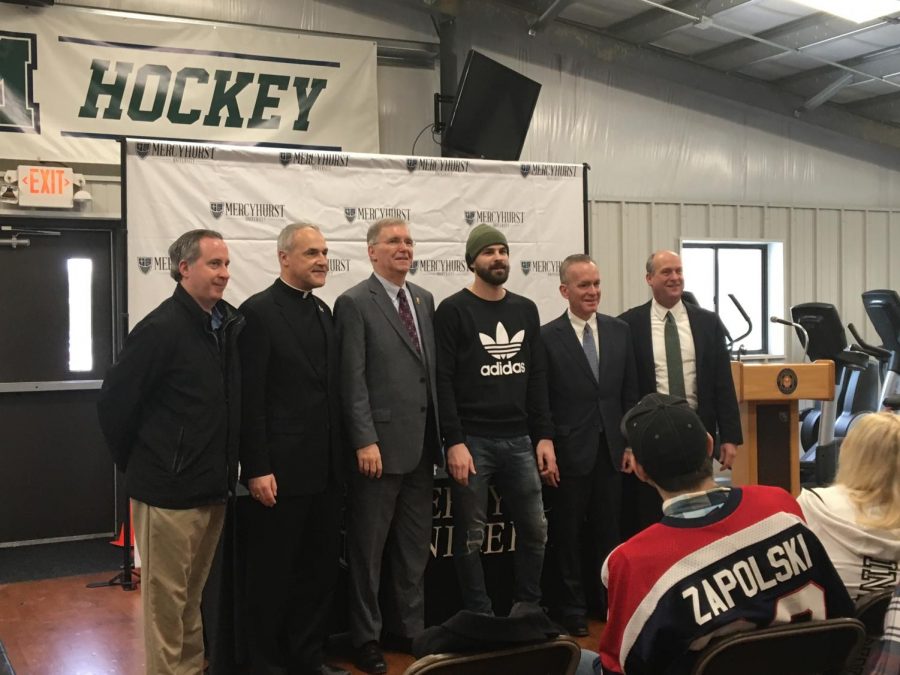 With February upon us, the 2018 Winter Olympics, in PyeongChang, South Korea, are fast approaching.  And in the XXIII Olympic Winter Games, Mercyhurst will have four current and former students playing ice hockey for three different countries.  Current student Emma Nuutinen, a sophomore from Vantaa, Finland, will be playing for her home country in what will be her second Olympics.  11’ grad Megan Agosta and ‘12 Bailey Bram will both be playing on the woman’s team for Canada.  Most notably, Erie native and Mercyhurst 2011 graduate Ryan Zapolski will be playing for Team USA as goalkeeper.

President Michael T. Victor said he “couldn’t be more proud,” of Mercyhurst’s representatives in the Olympics.  “We’re on the world stage now, and Ryan’s actually going to put the Mercyhurst ‘M’ on his team helmet,” said Victor. “The whole university is behind him, and we really hope he wins the gold.”  Rick Gotkin, the head men’s ice hockey coach, recruited and coached Zapolski during his time at Mercyhurst.  “Ryan was a very, very good student athlete here and a great young man. He’s had a nice professional career since he left Mercyhurst,” said Gotkin. “Being chosen to play on the U.S. Olympic team is really icing on the cake.”

Zapolski, who has been playing hockey for the Continental Hockey League (KHL) in Finland, returned home to Erie for the week preceding his trip to South Korea.  At a recent news conference held for Zapolski drew a number of prominent dignitaries.  Victor, Gotkin and Erie Mayor Joseph Schember were all in attendance.From Erie’s Cathedral Preparatory School, the Rev. Scott Jabo, president, and Bill Flanagan, athletic director, were also present for the news conference. Zapolski is a 2004 alumnus of Cathedral Prep.  It was at the press conference that it was announced Zapolski’s number, 35, would be retired at the end of the current season.

Zapolski was pleased to be back in Erie and spend time with his family, as well as using the ice at the Mercyhurst Ice Arena.  His practice session was widely publicized by school social media, with a live stream capturing Zapolski skating in his old stomping grounds.  “I’m proud to be the guy to represent such a great university,” said Zapolski. “It was a great place for me to develop, and I’m really happy that they’re so welcoming of me coming back.”  Zapolski advises any current Mercyhurst students with Olympic ambitions to “keep working hard, and don’t stop believing in yourself. … There’s no reason why anyone can’t be an Olympian. It just takes a lot of hard work.”

Nuutinen and Finland play first on Feb. 11 against Team USA. Team Canada, with Agosta and Bram, play later in the day against Russia.  Zapolski and Team USA take to the ice first on Feb. 14 against Slovenia.