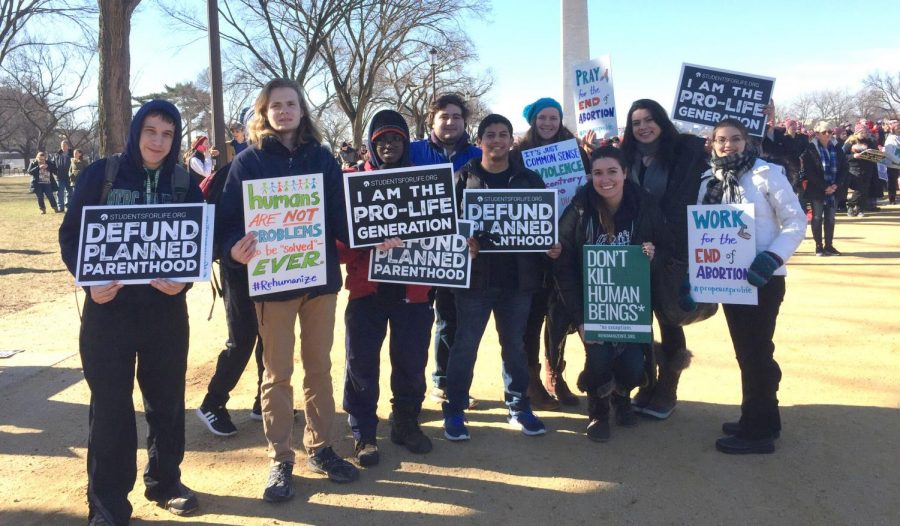 This January, hundreds of thousands of people throughout the country joined together in the world’s largest anti-abortion event: March for Life.

Aligning with the 45th anniversary of Roe vs. Wade — the Supreme Court case that effectively legalized abortion — the organization hosts a number of events throughout the month to advocate against abortion and promote other causes.

With the help of the local People for Life organization, 10 Mercyhurst students were given the opportunity to attend the country’s largest demonstration on in Washington, D.C., on Jan. 19, themed “Love Saves Lives.”

“When I found out that Mercyhurst was going to D.C. and representing our university, I was so thrilled,” said sophomore Gabrielle Bejarano. “It’s a blessing that the opportunity of being made a part of something so significant as the right to life is made available to students at MU.”

The students explored the city and attended mass at the Basilica of the Shrine of the Immaculate Conception, in addition to joining the masses that marched up Constitution Avenue.

“We are all united together by defending the lives of unborn babies,” said senior Rebecca Harms. “There are people praying as they march, singing and chanting. It is so beautiful to look around and see so much support for something you believe in.”

Among those in attendance were House Speaker Paul Ryan and Pam Tebow, mother of football player Tim Tebow, both of whom were among the numerous speakers at the National Mall.

“It is the gift of life itself — that is why we march,” said Trump. “That is why we pray, and that is why we declare that America’s future will be filled with goodness, peace, joy, dignity and life for every child of God.”

With these remarks, he became the first president in history to address March for Life, which was a large victory for the organization.

Beyond the Washington, D.C., event, more than 70 cities around the country voiced their support of the movement with smaller, satellite demonstrations.

Locally, the third annual Erie March for Life took place on Jan. 22 in Perry Square. The demonstration traveled west on West Sixth Street, south on Sassafras Street, east on West 10th Street, north on State Street and ended back at Perry Square for a Pro-Life Rally.

Although March for Life’s month of marches has come to a close, the organization continues to advocate for anti-abortion causes throughout the rest of the year in pursuit of what their website calls “a world where every human life is valued and protected.”

“The pro-life movement is still on fire and still fighting for what they believe in,” Harms said.