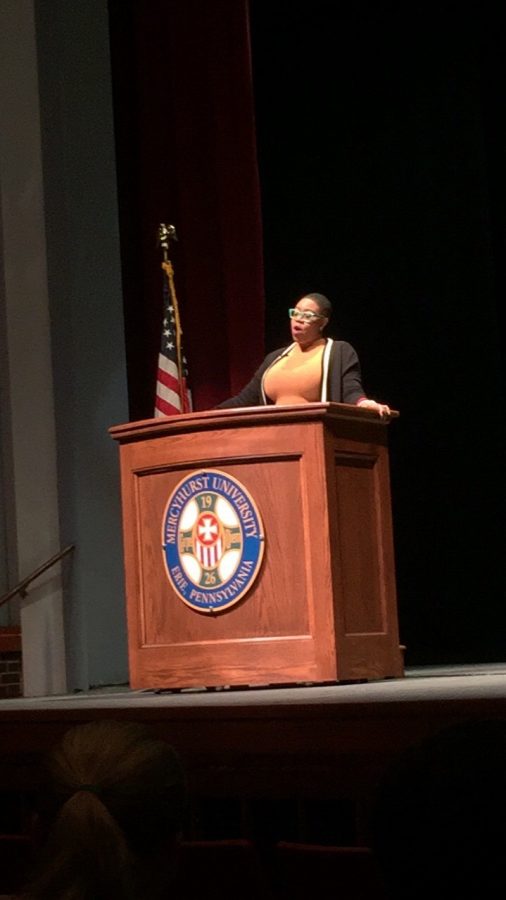 On Jan. 21 in the Performing Arts Center, Symone Sanders, former national press secretary for Sen. Bernie Sanders’ presidential campaign and current CNN political commentator, spoke to the Mercyhurst community about the current social and political controversies of our country can be improved through the influence of a radical and revolutionary youth.

Her talk took place as part of the Mercyhurst Student Government Distinguished Speaker Series. Symone Sanders is known for shining a light on the fight for juvenile justice reform and has brought millennial perspectives to policy conversations amid recent events.

During the presentation, Symone Sanders focused on the current political and social circumstances to illuminate the issues that are plaguing our society and offered suggestions as to how the youth could come together to remedy this situation.

“Black history is American history.” This is the phrase that she began with and cleverly weaved throughout her speech to emphasize the message. Carter Woodson, Ph.D., studied African-American history because he felt that the contributions of black people were being erased. Because of this, he established “Negro History Week” in 1926, which ultimately became Black History Month in 1970. This was revolutionary at the time, and he aimed to have this taught in schools. Woodson was ostracized because scholars felt that there were no contributions from black people so they did not deserve to be highlighted. Over six years, Black History Month was celebrated and President Gerald Ford officially established it 1976.

Symone Sanders noted this part of history because, as mentioned before, black history is American history. She emphasized that when people question why certain groups are singled out and celebrated (as with the case of Black History Month), they do not know their history. She also mentioned that America was not founded on slavery ideology.

Furthermore, she called for a frank conversation about race. She mentioned that this lack in conversation is what led to the events in Charlottesville, Va., and so many other atrocities such as this. She noted that children in Germany do not walk in parks named after Nazi Germans, but in the United States, we have statues and parks named after people who believed that they had the right to own other humans.

She continued by pointing out that it was not until Martin Luther King Jr. began talking about economic inequality and the Vietnam War that the government sent him death threats and told him to discontinue his efforts.

Sanders also talked about being on the campaign trail with Sen. Bernie Sanders. She mentioned how one week during the campaign she had difficulties getting into the events every single day.
Finally, she had to tell the people booking the event to let the event staff know that she was a “bald, black woman.” That last day proved the most difficult as she encountered bigots and racists who tried to prevent her from entering. She broke down crying in front of Sen. Sanders and his wife when they asked her what was wrong. Once she told them about the week, Sen. Sanders said to her, “If you can’t get in, who else is being locked outside the door?”

This led Symone Sanders to pose the question, “Who else is being locked out of the proverbial building?”

She encouraged those in the audience, and youth in general, to be the radical and revolutionary. Those with these qualities were the ones throughout history who “pushed the needle and created change,” she said.

She cited the women’s suffrage movement, Black Lives Matter and civil rights leaders to name a few. Per Sanders, truly being a bold revolutionary means you do not ask for permission. She notes that in every prominent movement thus far, making the needle move or the pendulum swing has been done by young people. The work that happens now will affect those in 60 years.

For the ones who can lend their voice and support to the nonprivileged, she mentioned that a real accomplice requires being uncomfortable. There will always be a battle, and the important thing is where on the spectrum the individual will be standing once it is over.

“I hope you choose what was needed to be done because that is what will be in the history books. Be bold, radical and revolutionary,” Sanders said.

She ended her speech by reading the poem “The Things That Haven’t Been Done Before” by Edgar Guest. She left the audience with this call to action: “This is our moment, and I hope you don’t miss it.”

Following her talk, she opened the floor to questions. The response to the question “Isn’t something like Black History Month dividing us instead of bringing us together?” was favored among the crowd. Sanders responded with the notion that America is not a melting pot. It is, in reality, a salad because everyone has their differences. She explained that one cannot make a salad by picking up a tomato and saying that it is lettuce or vice versa.