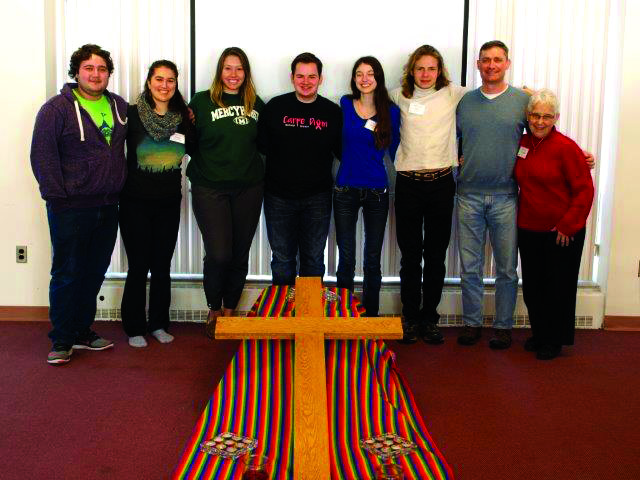 Imagine being completely silent for 48 hours. No talking at dinner, no texting and no using your hands to interact with classmates. That’s exactly what students did the weekend of Jan. 12 during the silent retreat at Villa Maria Education and Spirituality Center.

The Center’s mission provides and promotes educational and spiritual experiences in unique settings for people of all ages, faiths and economic status. It is a sacred setting that seeks to inspire lifelong learning and growth through relationships with God, others, self and the Earth. It is also the place that sponsors the Carpe Diem Retreats.

“The retreat was an amazing experience that allowed me to step away from the distractions of every day and find some clarity in my life at a time I really needed it,” Kimmie Kramer, senior Intelligence Studies and Public Health double major, said.

Silent retreats are a time spent away from one’s normal life to pray and reconnect with God in a different way. They are a place of quietness, stillness and listening.

“It was a time to reflect and listen to God around us and in us,” Sergio Cortes, senior Political Science and Business Economics double major, said.
Silent retreats are an old tradition within the Christian church.

While the act of leaving one’s everyday life to connect with God is as old as Christianity itself, the practice of spending a specific amount of time away dates back to the 1520s with St. Ignatius of Loyola. With the help of Ignatius’ “Spiritual Exercises,” the Jesuits were the first order to make it part of their rule to retreat regularly.

Sometimes people are alone in silence for the entire given time, but for the retreat at Villa Maria, students were able to meet with a spiritual guide and a community of people for prayers.

Greg Baker, director of Campus Ministry, hopes students slow down and feel a bit more peaceful by the end of the retreat.

“Trust a bit more that God’s voice can be found within themselves,” said Baker. “They don’t always have to rely on external sources to deliver that to them.”

The retreat at the center is an intercollegiate retreat sponsored by the Catholic Diocese of Erie. It is available to students from eight different campuses, with Mercyhurst, Clarion, Gannon and Thiel participating at this retreat. Mercyhurst always has the biggest group of students who participate every year. The retreat was held at the beginning of the new year because it is able to work around all of the different academic calendars. This is the only silent retreat that Mercyhurst offers throughout the year, but Campus Ministry is always available to point students towards other monasteries.

Many of the students ended up talking sometime during the weekend retreat.

“The idea is about trying. It’s not about perfection,” Baker said.

Students aren’t penalized for talking at any time because it is hard to stay silent when the students are so used to sharing their ideas in groups. Meals in particular are a time when it is hard to stay quiet since it is a natural time to talk to the people around you. It is easy to recognize a lot of one’s habits and patterns when you stop talking for a couple of days.

“It was easy to stay silent until we all started talking,” said Cohen. “Once someone spoke, it became a chain reaction.”

This was Cortes’ third silent retreat with Mercyhurst. It’s the one he has spoken the least in.

“We’re supposed to only communicate with our spiritual director, and throughout the whole retreat we’re supposed to be in complete silence,” said Cortes. “And that goes beyond just words, that’s even body language.”

This retreat specifically goes back about 30 years. It used to be a week long and was a much more intense experience. Baker himself made the week-long retreat when he was in college.

“I’m proud of our students who give it a try,” said Baker. “They are courageous enough to seek out this kind of experience.”