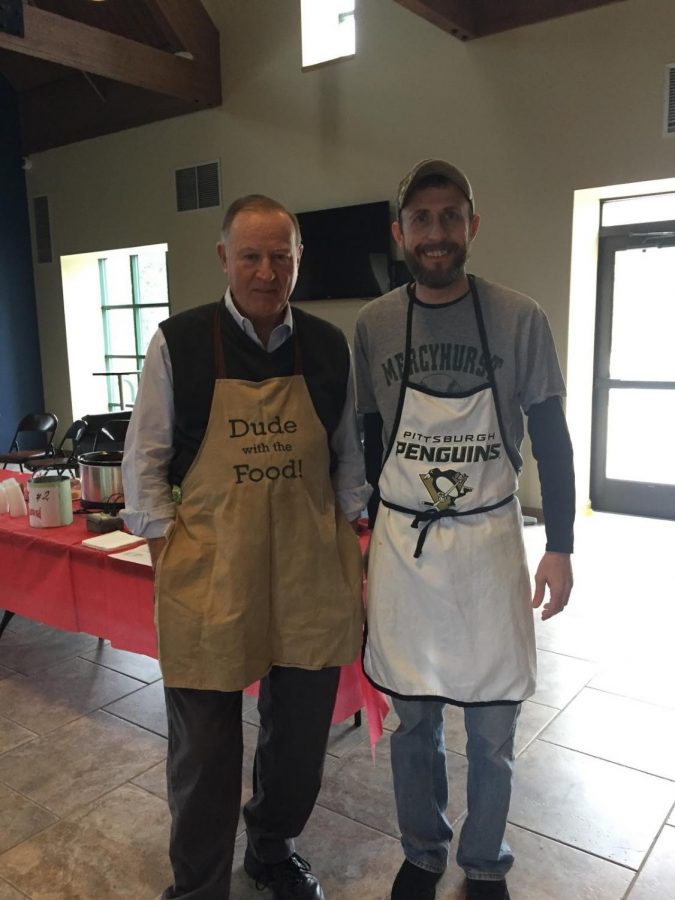 Dennis Donovan and Matt Platz both won for their outstanding chili.

Last Friday, the lovely groundhog in Punxsutawney saw his shadow and sent us into another six weeks of winter. It was also the day for a much warmer and happier event on campus: the annual “Phil Up Your Bowl” Chili Cook-off.

“The event first started around 2006. The HR staff was looking for something that would bring folks together in the winter,” director of Human Resources, James Tometsko said.

Five years ago, Human Resources asked Campus Ministry to join them in the organization of the event.

“Chili is a great mid-winter food, and it made sense to do this annual event close to Groundhog Day,” said Greg Baker, director of Campus Ministry. “It’s a simple, fun and warm way to gather students and employees.”

During the event, people can try each chili for 25 cents. The money raised through the cook-off goes to the Mercy Center for Women.

Finally, Baker and Kim Zacherl, assistant professor of Business, battled Collins for the most unique ingredient.

Along with the trophy for the best in each category, there is also a “Best Chili on the Hill” award for the best chili overall.

“I’ve been making this same chili for the past 40 years and I’ve participated in every cook-off,” said Donovan, an eight-time winner. “I think I’ve found a real nice recipe that satisfies a lot of people.”

The winners were announced and once again, Donovan won the “Best Chili on the Hill” award. Platz took the trophy for traditional, Patton for vegetarian, Baker for unique ingredient and Woodward for hot and spicy.

“I think it’s one of those things that very personal and subjective and it’s like music and wine. If you like it, you pay attention to it,” Donovan said.

The event raised $325 for the Mercy Center for Woman. Tometsko had said the goal was $250, which is around what the event typically raises.