On Tuesday, May 3, Mercyhurst College will welcome filmmaker and Sun Dance Film Festival winner Josh Fox on campus from 2 p.m. to 7 p.m.

Fox was asked to lease his land located atop the Marcellus Shale area in Milanville, Pa., to a natural gas drilling company.

Leery about the idea, Fox decided to check out other areas that had agreed to the drilling. This research turned into an award-winning documentary called “Gasland.” This movie reveals the potential danger of drilling, fracking and secrets that many are unaware of. 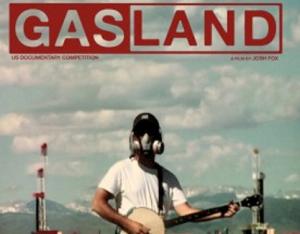 Contributed photo: Josh Fox, director of ‘Gasland,’ will be at Mercyhurst to answer questions and spread awareness about fracking.

Otherwise known as hydraulic fracturing, fracking occurs when chemicals and water are blended together and forced at high pressures into shale to create a ‘shake’ underneath the ground. Millions of gallons of water are used in this process which results in contamination of nearby drinking water.

The documentary shows residents of fracking areas who can light their drinking water on fire from the faucet, who develop chronic illness symptoms and who have pools of waste water killing vegetation and cattle. Aside from these issues, gas well blowouts occurred that were frequently covered up by state and federal agencies.

Fox was asked by Assistant Professor of Communications Anne Zaphiris, Ph.D., to speak at Mercyhurst.

“Quite frankly, I just asked. We found a date that worked in his schedule and for Mercyhurst,” Zaphiris said.

Gasland will be shown, free of charge for students and faculty, at 2 p.m. in Taylor Little Theatre. Following the viewing, Fox will be in the Hermann Student Union from 4 p.m. to 6 p.m. to answer any questions from students and faculty about the drilling controversy. To end the evening, at 7 p.m. Fox will return to Taylor Little Theatre to speak to the campus and the Erie community.

“Josh’s visit to campus will allow us to build knowledge and increase awareness about a controversial issue facing many communities. At Mercyhurst, our overriding message to students is to consider using their talents for social good and positive change,” Zaphiris said.

Residents like Zaphiris have been working together on a campaign called “Our Water Our Rights” to prevent this from entering their community.

Zaphiris is confident many from North East will attend the event and has been working hard with other residents to promote awareness of fracking and its consequences.

Zaphiris isn’t the only one creating awareness; her Principles of Public Relations class is also promoting the Josh Fox event to let everyone know the importance of attending.

“I plan on using word of mouth as a prominent marketing strategy, and we will target the teachers with our goals so we can provide Josh Fox with an audience,” sophomore Nayah Nicholson said about how she plans to do her part.

The Public Relations class is also using posters and emails around campus to promote the event.

For more information about fracking or the North East drilling click here.