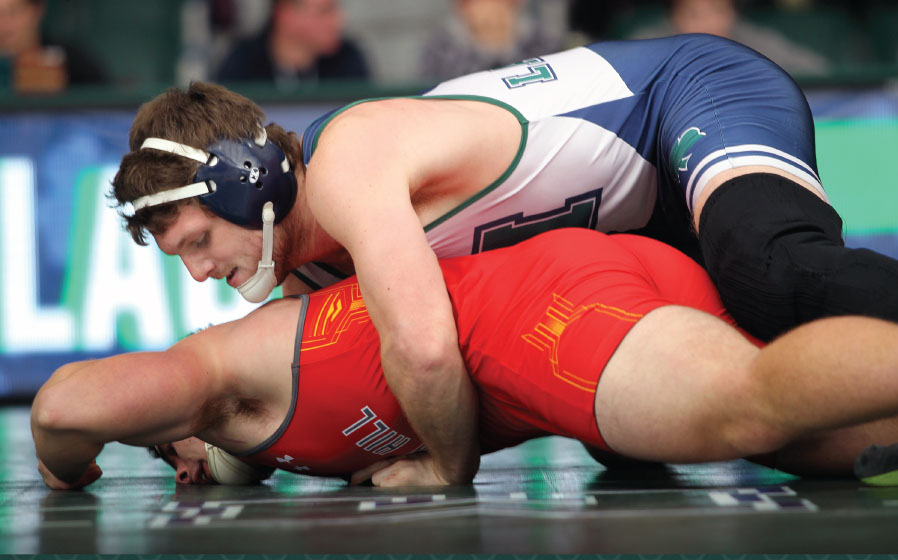 Redshirt senior Dakota DesLauriers, pictured last week, had one of the winning matches against Pitt-Johnstown.

Over the weekend, Mercyhurst Laker wrestlers faced the University of Pittsburgh-Johnstown’s Mountain Cats on Feb. 9 in a dual meet.  The Lakers suffered their first loss of the season in this meet as they fell 32-10 against the Mountain Cats.  Prior to the loss, the Lakers had an impressive 11-win streak stretching the entire 2017-18 season.

“We wrestled a very good team on Friday,” said Laker head coach Mike Wehler. “It was probably the biggest crowd we wrestled in front of this year.”  Redshirt senior Dakota DesLauriers won his match for the Lakers with a 12-4 major decision at 184 pounds.  “I think with it being such a big crowd, that’s not something we’re used to,” said DesLauriers. “They had a pretty good crowd there cheering against us the opponents. I’m sure that played a bit of a factor.”

Freshman Alexis Soriano, 133 pounds, also won his bout.  It’s been a great year,” said Wehler. “We’re very young. We’re wrestling very well. We’re finding ways to win. Different guys are stepping up each night to put ourselves in position to win. Even though we got beat on Friday, I’m still very pleased with our progress and still think we can achieve quite a bit.”  The victory for the Mountain Cats secured their third straight Pennsylvania State Athletic Conference (PSAC) Dual Meet Championship.

“I think it’s good for us at this point in the season,” said DesLauriers. “We were on that winning streak and it set us back, told us where we were, so we’re definitely going to work harder now.”
Even though the Lakers lost this meet, they are eagerly anticipating their next match against crosstown rival Gannon University on Feb. 14. Gannon is currently 7-5.   “I’ve been looking forward to this match all year. I know they beat us last year in a close one,” said Eric Bartos.   Last year, Gannon pulled off a 16-22 victory in the rivalry meet.

“I’m excited for that one, they have a pretty tough 184 pounder,” DesLauriers said in reference to his weight class. “I think it’s going to go really well. If we show up and wrestle like we have been wrestling previously in the season I think we should win.”

Both teams take to the mat at 7 p.m. in the Mercyhurst Athletic Center.