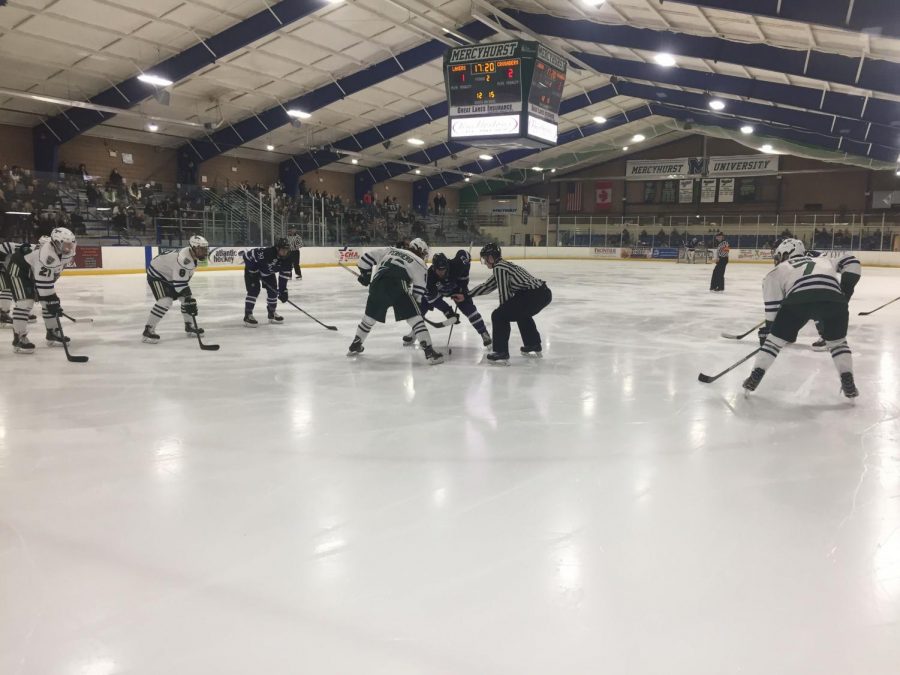 The Mercyhurst men’s ice hockey team swept Holy Cross at the Mercyhurst Ice Center on Feb. 9-10.  With the wins, the Lakers held the program’s longest unbeaten streak since 2002.

However, Feb. 9’s contest didn’t start off in favor of the Lakers.  They were down 1-0 at 1:18 into the first with a goal from Holy Cross’ Kevin Darrar.   Later in the first, Holy Cross tallied another one for a 2-0 lead.  With less than three minutes remaining in the first period, however, the Lakers’ Les Lancaster capitalized on a power play, cutting the Crusaders’ lead in half.  Brian Sienerth got on the board for the Lakers, tying the game at 2 in the second period.

Jack Riley gave the Lakers their first lead of the game with less than four minutes remaining in the second period, scoring on the power play.  From this, the Lakers had a 3-2 lead heading into the final period of play.   Early in the third, Holy Cross evened the score at 3 each with a goal from Will Brophy. The Lakers then scored three straight goals before Holy Cross answered with two.
Laker goals were from Wes Baker, Josh Lammon (power-play) and Sienerth.  Time expired and the Lakers walked away with their eighth-straight win.

“I thought we had a slow start,” said Laker head coach Rick Gotkin. “We were down two-nothing, but we stayed nice and calm on the bench. … I think we felt like we knew we’d be able to score some goals.”  And the Lakers did just that, pulling off a 6-5 win.  Laker goaltender Brandon Wildung finished the night with 28 saves. The Lakers went 4-for-5 on the power play.

On Feb. 10, a mere 31 seconds into the game, Jonathan Charbonneau put one on the board, giving the Lakers a 1-0 lead.  During the second period, Derek Barach found the back of the net, putting the Lakers up 2-0.  Later in the period, the Lakers managed to kill off a five-minute major penalty and tallied a power play goal from Charbonneau, assisted by Taylor Best and Joseph Duszak.
About halfway through the third, Barach got his second of the night, assisted by Zach Todd and Sienerth.  The Lakers went 2-for-4 on the power play, while the Crusaders were 0-for-5. Wildung finished with 34 saves, giving his third shutout of the season.

The Lakers were 7-0-2 in their last nine contests after the weekend.  Barach recorded his 100th career point in the Feb. 10 game. He is the 21st player in Division I program history to record 100 points. He is also the sixth player to reach this mark as a junior.

The Lakers were back in action Feb. 12, hosting the Rochester Institute of Technology Tigers.  The Tigers and the Lakers played after games Dec. 29 and 30 were postponed by bad weather.
Unfortunately, the Tigers pulled off an overtime 6-5 victory over the Lakers.  The two teams will meet again Feb. 23-24 in Rochester.