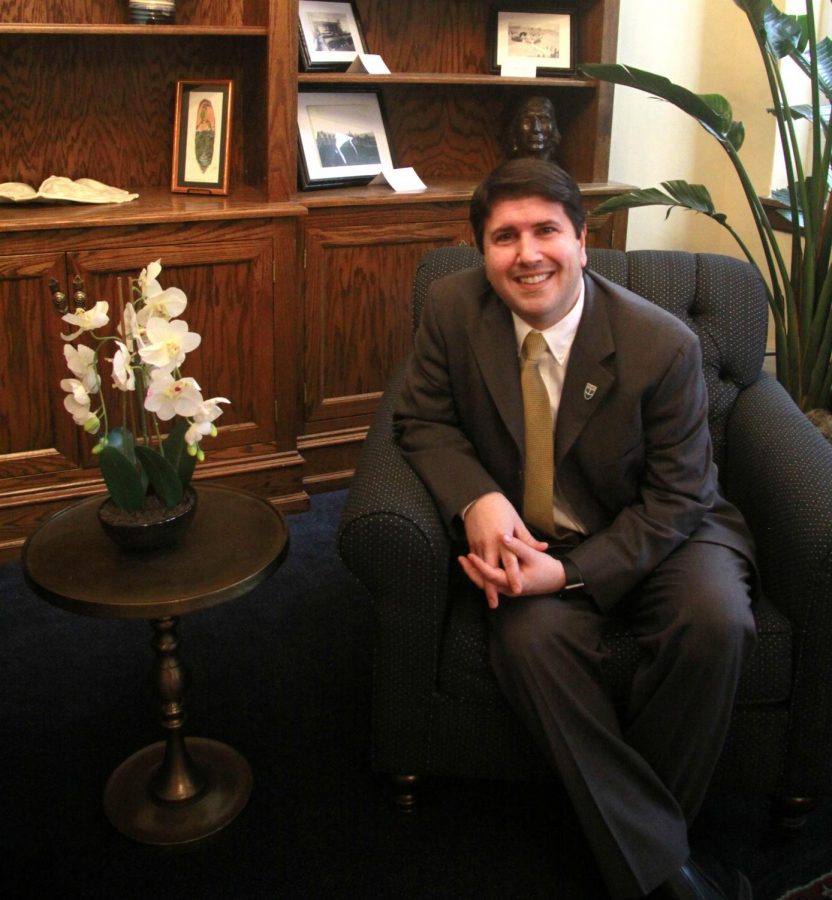 On Feb. 1, David Dausey, Ph.D., announced that he will be stepping down from his position as Mercyhurst provost and executive vice president and will be accepting the position of provost at Duquesne University in Pittsburgh.

“It’s very strange to leave a place you don’t really want to leave,” said Dausey. “Everybody here has been amazing in terms of helping me through this decision. It’s been really wonderful to have the help of those folks, but it doesn’t make the decision any easier.”

Duquesne University is a nationally ranked tier-one research institution that values its Catholic mission and long standing heritage in Pittsburgh. Duquesne’s similar mission to Mercyhurst and dedication to academics is helping to ease the transition for Dausey, both being a large part of his personal values and goals.

In a news release from Duquesne, the faculty and staff said they are excited to welcome Dausey to their community.

“Our strategic plan calls us to identify bold pathways to create a vibrant campus community and to develop academic programs that transcend traditional boundaries. David will be instrumental in helping us to achieve these goals,” said Duquesne University President Ken Gormley.

Dausey is a Mercyhurst alumnus and has served as provost since 2015, helping to create change and growth at the university.

“I never really considered my position at Mercyhurst a job; it is more like my passion project. I came here more as somebody who saw the potential and wanted to expand on what was already here,” said Dausey. “I feel I pursued that with an enthusiasm that goes beyond what most people apply to a typical job.”

One of his proudest achievements during his time at Mercyhurst was the institution of the Public Health program and seeing the successes of the program’s graduating students. He became director of the program in 2011, teaching for several years and serving as dean of the School of Health Professions and Public Health in 2013.

There were also several challenges during his time as provost, even from the beginning of his term, but Dausey attributes the support of the faculty and staff to helping the university during these hard times.

Justin Ross, Ph.D., the director of Mercyhurst’s Honors and Prestigious Awards programs, speaks highly of Dausey and the connection he has made with the honors program.
“Dr. Dausey’s support for the honors program is immense,” said Ross. He has a clear idea of what he wants and how the honors program connects with the academic mission of the university. … He has been a wonderful supporter.”

“He wanted to be able to come in and talk in a casual way with honors students as a way of showing them the program is something special. It is connected to the provost office in way that other programs are not,” Ross said.

Dausey is a native of Pittsburgh and still has a majority of his close family and friends living in his hometown. He also has several professional ties to Pittsburgh, as he was a professor at Carnegie Mellon University and senior director of health programs and initiatives at CMU’s Heinz College before coming to Mercyhurst.

Being closer to home and family was one of the major factors in his decision to make the transition to Duquesne.

Even though Dausey is passionate and confident about his new position, he still has a positive outlook here at Mercyhurst as current the dean of the Hafenmaier Humanities College, Leanne Roberts, Ph.D., takes over as provost beginning at the end of the academic year.

“It is a great honor to hand this position off to Dr. Roberts. She will do an amazing job and continue that positive energy forward. I see an incredibly bright future for Mercyhurst as we have laid the groundwork for a lot of exciting projects. I am 100 percent confident that it is in good hands,” Dausey said.

“Mercyhurst is irreplaceable not only in my mind but in my heart,” said Dausey. “It has been the greatest honor of my life being the provost here. Everybody — faculty, students, staff — were wonderful to me as a person and helped me to grow as an administrator and one of their colleagues. I will be forever grateful to them.”