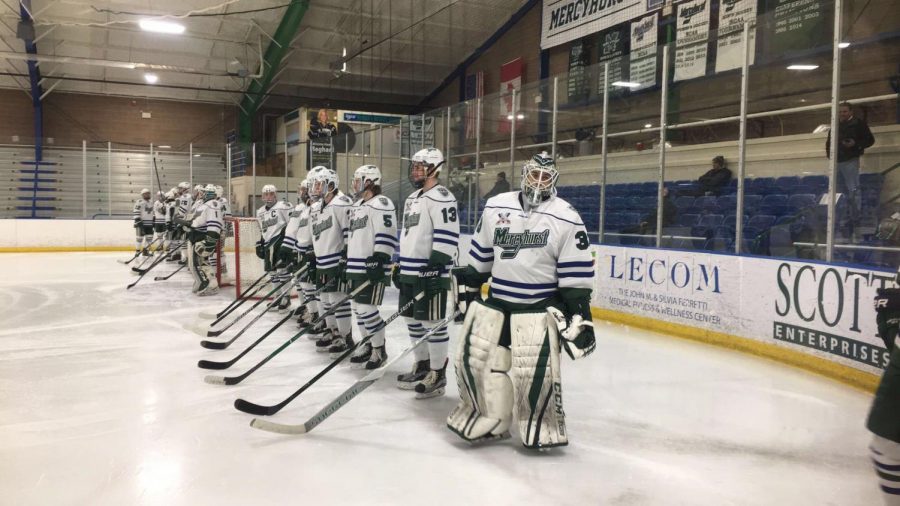 The Lakers line up before their game Feb. 17 in the Mercyhurst Ice Center. The Lakers beat Robert Morris University twice, including a 3-2 overtime win.

The Mercyhurst men’s hockey team swept the Robert Morris University Colonials Feb. 16 and Feb. 17 in a home and home series, walking away with a regulation and an overtime win.

The Lakers played their last regular season home game on Saturday night, where they honored their 11 graduating seniors.

The Lakers took home the win in Friday’s matchup in Pittsburgh, beating the Colonials 2-1.

Bryan Sienerth iced the first goal for the Lakers.

As time was about to expire, Derek Barach capitalized on the power play, with a mere second left on the clock in the first period.

The Lakers were up 2-0 at the end of the first.

The Lakers’ Jack Riley took a five-minute major penalty in the second period, but they managed to kill it off.

The Colonials were unable to capitalize with the man advantage, but they were able to get on the board seconds after the penalty expired.

Robert Morris’ Sean Giles took a shot from the top of the circle and found the back of the net, pulling the Colonials within one.

Neither team would tally another goal, making the final score 2-1, Lakers. The Lakers finished 1-for-4 on the power play while the Colonials went 0-for-1. Lakers goaltender Brandon Wildung had 26 saves.

In Game two, the Lakers’ senior night played out in the Mercyhurst Ice Center. The game remained scoreless until the Lakers got on the board two minutes into the second period with a goal from Patrick Piacentini.

The game remained tied going into the third period.

Kane Elliot got on the board for the Lakers early in the third period, assisted by Josh Lammon. From here, the Lakers gained a 2-1 lead.

The Colonials tied the game at 2 just before regulation expired.

Lammon was able to find the back of the net late in overtime and score the game winning goal, making the final score 3-2.

“It was a heartfelt battle all game,” said Lammon. “It was a good win for us.”

Goaltender Wildung had 37 saves for the Lakers. The Lakers went 0-for-2 on the power play while the Colonials went 0-for-4.

With Saturday’s win, the Lakers managed to clinch a first-round bye in the Atlantic Hockey Tournament.

For the final game of the regular season, the Lakers head to Rochester, N.Y., to take on the RIT Tigers on Feb 23 and Feb 24.

The Tigers pulled off a 6-5 overtime victory in their previous meeting.