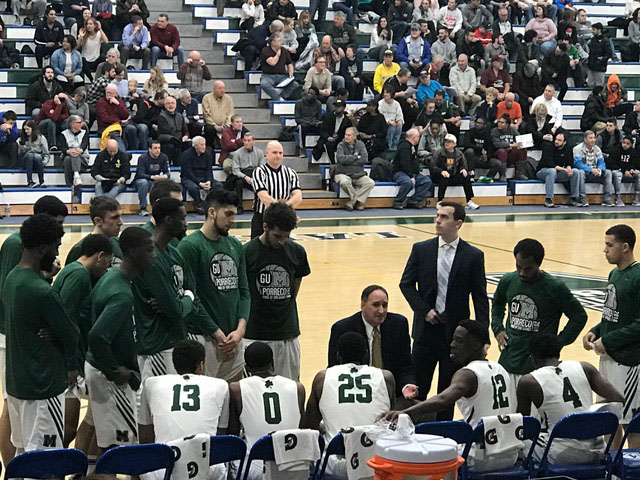 Despite all the energy in the Mercyhurst Athletic Center, the Mercyhurst Lakers men’s and women’s basketball teams both lost to the Gannon University Golden Knights in the Porreco Pride of Erie game.

At its peak, the crowd swelled to 623 fans from both schools on the Feb. 17 rivalry matchup.

On the women’s side, the Lakers were bested 59-75 by the Golden Knights.

The Golden Knights began compiling a lead in the first half, ending up 31-20 over the Lakers.

The Lakers struggled to stop the piling on, as the Golden Knights outscored the Lakers 23-12 in the third quarter.

Although the Lakers would outscore the Golden Knights 27-21 in the fourth quarter, it was not enough to cut the final 16-point deficit.

“Gannon is a solid team,” said Laker Lauren Lapertosa. “They are a big offensive threat, which makes them difficult to defend. I think they all play well as a unit, and I think they showcased that in the game this past Saturday.”

Laker Maria Lapertosa led with 16 points, followed by 13 each by Eliza Oswalt and Kori Sidwell.

The men’s side was certainly a lower scoring affair overall. The Lakers carried the lead into halftime up 26-22.

“Our defense was fantastic against Gannon,” said Laker Patrick Smith.

However, the Lakers struggled to keep pace in the second half with the Golden Knights, who outscored the Lakers 36-24.

Smith had 13 points to lead the Lakers’ scoring, followed by Malcolm Walters with 10, Lorenzo Collier with nine and Derrick Ellis Jr. with eight.

Both Laker hoop squads have their final regular season home games Feb. 21 against Pitt-Johnstown. The game is also the senior night for both Laker squads, who together have six seniors (five men, one woman).

“Pitt-Johnstown is a team full of shooters,” said Smith. “We weren’t able to close the game out against them the last time we played them, but we are a much better team at home then we are away. I’m not saying the game will be easy because there are no easy games in the PSAC, but I do believe this is a very winnable game.”

Previously, both Laker squads lost to Pitt-Johnstown (54-63 and 64-67 for women’s and mens, respectively).

“I would like to win our last two games,” said Lauren Lapertosa. “Wednesday’s game is senior night so I really want to get the ‘W’ for our only senior Jamaya Shabazz, and then a W over Edinboro would be a really nice way to close out the season.”