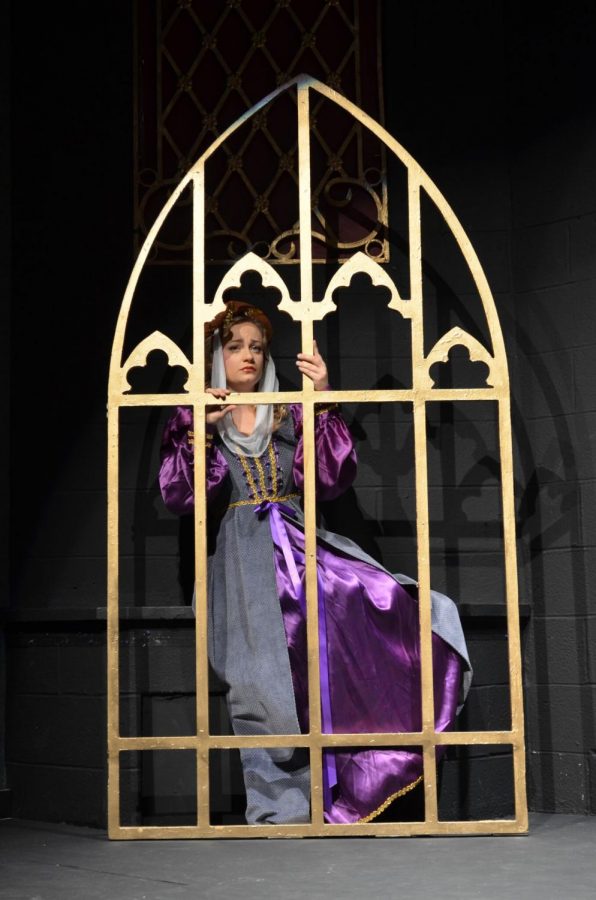 Victoria McIlvain, ‘17, performs as Gilda, Rigoletto’s daughter, in the production of “Rigoletto.”

The D’Angelo Opera Theater is well underway in preparations for its production of “Rigoletto.”
Based on a play by Victor Hugo, Guissepe Verdi’s opera centers around the life of a hunchback court-jester who balances the duality of beauty and evil that exists in the world.
Considered to be one of Verdi’s masterpieces composed toward the end of his career, this opera still resonates with audiences today, studying some of the harshest truths of life.
Extremely gritty and exciting, “Rigoletto” delighted and shocked audiences at its premiere in 1851.
The content covered in this opera is very real, and at the time it was shocking to see something dramatic, unlike the content of other operas that focused on love and beauty.
Directed by Louisa Jonason, director of the D’Angelo Opera Theatre for 22 years, she has taken on almost every role in the production of past operas.
Even though a three act opera is a lot to undertake, it is an important part of students’ curriculum.
“I am grateful, every day to be doing it. I feel it prepares our students for the professional world and empowers them in many ways.”
With a score of 350 pages of music for 20 different instruments and up to eight vocal parts, Jonathan Moser, instructor of Music and conductor of “Rigoletto,” has had to familiarize himself with the score well in advance of the production.
He then created bowing for each of the string sections to make sure the musicians are moving their bows in unison.
Once they neared the rehearsal process and Moser found out who he would be working with, he was able to start piecing the big picture of the orchestra together.
The process of collaborating with multiple moving parts to put a production together of this scale surely takes organization and strength.
Moser said, “By production week, March 18-25, we will have worked through the whole opera three times with the singers.”
“Rigoletto” is three acts in length and includes some of the most well-known arias, or solos, in operatic history.
Moser said that for his first time conducting an opera, it is very different from conducting a symphony. The final product of any process is usually the most exciting piece.
“It will be incredibly rewarding in the performance since the music is what gives life and emotional intensity to this incredibly dramatic story,” he said.
“Rigoletto” will grace the Mercyhurst D’Angelo Performing Arts Center stage on March 23 at 8 p.m. and March 25 at 2 p.m.
Tickets are $15.50 for adults, $12.50 for seniors and students and $5 for students with a Mercyhurst ID.