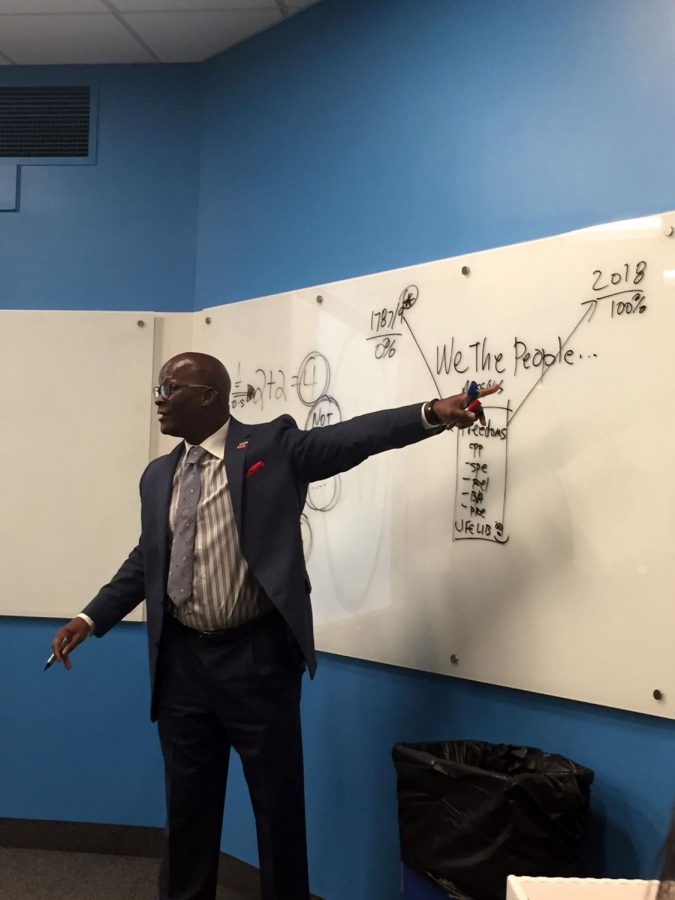 Unity Week is a time for Mercyhurst students to come together to recognize the diversity of our campus and how we can use our individual backgrounds, privileges and gifts to help those around us.

On Feb. 22, as part of the Unity Week festivities, Mercyhurst’s Multicultural Activities Council (MAC) invited Eddie Moore Jr., Ph.D., to speak to students on the topic of “Diversity, Power, Privilege and Leadership.”

Moore is one of the nation’s top educators, motivational speakers and experts on diversity in America. He is the founder and current director of The Privilege Institute (TPI) and The National White Privilege Conference (WPC) that seek to provide opportunities for research, education and collaboration around what privilege is and how it can be used to create change in American culture.

Moore assured the students that his talk would be entertaining and educational, but it would also make people uncomfortable. He believes that the feeling of discomfort indicates that something is wrong and needs to be either talked about or changed.

“I’m not saying you have to agree with some of the things out there — I’m not trying to convert you in any way,” Moore said. “I am saying it is important to have some working knowledge of them.”

One of Moore’s main points of the evening was the fact that the United States is changing quickly and dramatically in the composition of its people, in its ideas and in the awareness of these differences. He reminded the students that they are no longer growing up in the same age and culture as generations before us. Therefore, we are in need of new skills in our everyday lives.

“If you don’t have diversity skills, it is going to be hard for you to be employed in the 21st century. That’s just a fact,” Moore said.

Understanding the difference between equality and equity was an essential portion of Moore’s talk. He noted that equity is what society should be striving for in order to give more help to those who need it. For example, providing sign language interpreters in classes for those with a hearing disability is not giving special treatment, but allowing everyone to experience things in the same way.

Moore discussed privilege as having more rights or abilities than others and pointed out that these can be based on various aspects of who people are. He especially wanted to clarify that he is not condemning privilege, because he knows that it is a societal foundation that can be used for good when there is proper education involved.

“I’m not asking you to give up the power and privilege,” said Moore. “I am asking you to learn about it and its inner workings so that by understanding, we can do some really great stuff.”

He went on to ask why Americans have this innate prejudice. He argued that it is because of the way the institutions of the United States were founded and what Americans have been taught as children. Moore explained that children are influenced most by things they are taught between birth and 5 years old. If the foundation of a person is built on misunderstanding and hate, it can take a lifetime to undo these biases or negative thoughts toward a certain way of life or group of people.

Even though it can take years to reverse or mend prejudices or hurtful uses of privilege, Moore encouraged everyone to use his program’s 21-day challenge to make a small change in their lives to continuously improve their awareness of diversity and acceptance.

“If at this time next year, you are at the same level as you are right now, that is on you. There is no reason you can’t do some growing around this issue,” Moore said.

The general consensus was a hopeful outlook and support for the changing culture for women and people of color, but the agreement was that the U.S. still has far to go.

“It is part of our job to understand why people are acting in certain ways, not to be degrading but to be helpful,” said Moore. “Now it’s on you if you want to change.”

Moore concluded his talk stating that people often ask if he is optimistic about America’s future.

“No, I am not optimistic or pessimistic. I am ‘pissedimistic,’” said Moore. “For me that means being hopeful and optimistic about the future, but I am working hard to get things done about it.”