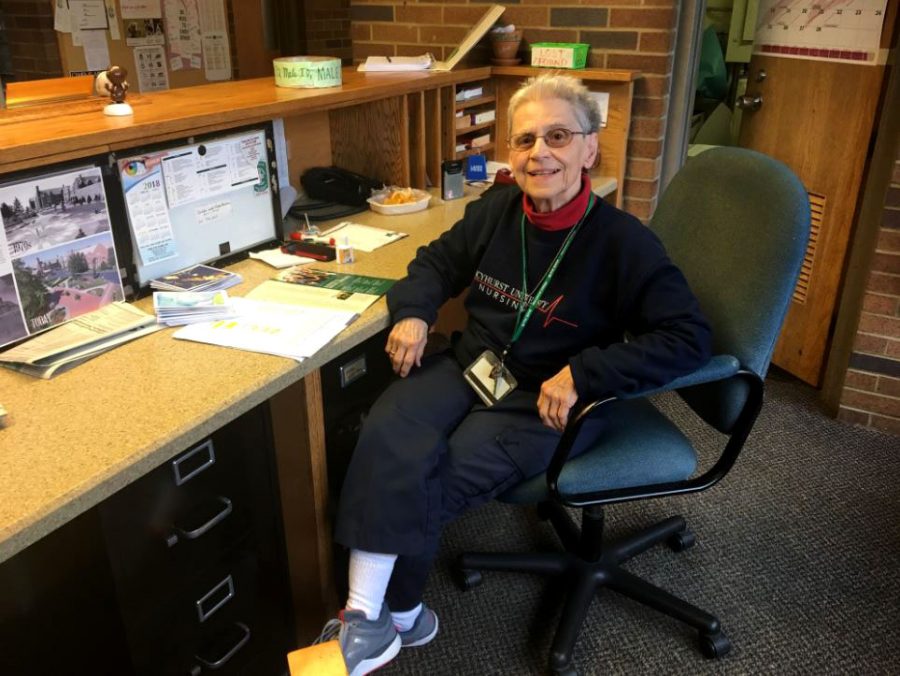 Sister Mary Paul Carioty, the beloved Baldwin desk clerk, will be honored along with Amy Danzer during Women’s History Month.

In March, the Mercy Center for Women will celebrate Women’s History Month with its event “Women Making History.”

Each year, the Mercy Center for Women accepts nominations and selects 12 women from the Erie community who have dedicated themselves to service, particularly in women’s issues. This year, Mercyhurst is represented by two Women Making History: Sister Mary Paul Carioty, RSM, Baldwin desk clerk, and Amy Danzer, director of Assessment.

The Mercy Center for Women, a sponsored ministry of the Sisters of Mercy, is an Erie-based organization “committed to enhancing the dignity of each person (they) serve through healing of body, mind, and spirit,” according to their website.

The center provides housing, education and counseling for homeless women.

Danzer was nominated by Sister Michele Schroeck. Currently the acting liaison for the Sisters of Mercy to the Mercy Hilltop Center and secretary for the Erie County Human Relations Committee, Danzer gives her time and effort to a variety of causes, including working at the House of Mercy, the Mercy Center for the Arts, Mercyhurst’s Child Learning Center and Mercyhurst Prep. She also helped establish a free pre-school program in the Little Italy neighborhood of Erie.

Carioty is the desk clerk and adviser to female students of Baldwin Hall. Nominated by Sister Pierre Dembinski, Carioty has been a Sister of Mercy since 1952. She has also served the Erie community as a teacher and nurse, working in an Erie homeless shelter for 17 years.

Carioty is involved in “Take Back the Site” events in Erie, in which homicide sites in the city are reclaimed for nonviolence via a prayer service with the family and community.

“I never thought I’d match up with some of the women that do this,” said Carioty. “I feel honored to be with them.”

Portraits of all 12 women will be on display in the main lobby of Saint Vincent Hospital throughout the month of March. The formal presentation will take place on March 27 at 7 p.m. in the Mary D’Angelo Performing Arts Center, and will be open to the public.