The Foundation for Defense of Democracies (FDD) in Washington, D.C., is an organization that believes educators should have access to the experience of top practitioners in their respective fields.

To better teach their students, professors should have a more hands-on experience with the topics that they teach. Mercyhurst College Intelligence Studies Professor James Breckenridge has been selected as one of only 20 academics who will participate in a 10-day course in Israel.

The FDD is a non-partisan policy institute. Its goals are to promote pluralism and defend the values of democracy. According to its website, the FDD believes “no one should be denied basic human rights, including minority rights, women’s rights and religious freedom.”

The men and women chosen for this course come from colleges and universities nationwide, and their backgrounds are diverse. 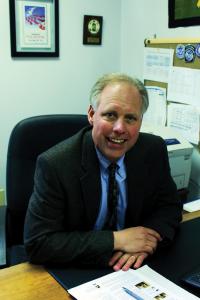 Jill Barrile photo: James Breckenridge, the chair of the Intelligence Department, will travel to Israel in June.
“Because terrorism is a global threat, they’re interested in a wide selection of academic backgrounds,” Breckenridge said.

The course will take place in Israel this June where the men and women will “learn more about the phenomenon of terrorism and Middle Eastern politics,” Breckenridge said.

Breckenridge is not a stranger to the Middle East. He has traveled to Israel on an academic tour, and he took 30 Mercyhurst students to Egypt two years ago to study abroad.

The FDD emailed Breckenridge with the announcement that he would be offered the chance to participate in the fellowship.

Breckenridge thinks this course is a great opportunity.

He believes one of the major problems in his area of study is that “academics do not have access to practitioners,” Breckenridge said. “It’s a fellowship for that time, but it continues the relationships as long you want them to be maintained. One of the objectives is to build a social network to communicate with.”

The course itself will take place in several locations in both indoor and outdoor environments.

“It’s designed to expose you to central Israel,” said Breckenridge. “I think what’s important about this fellowship is that it unifies a group of academics who can discuss this and look through a multitude of academic lenses.”

Upon his return to Mercyhurst in the fall, Breckenridge plans to use what he has learned in classroom instruction.

He regularly teaches intelligence courses on the Middle East.