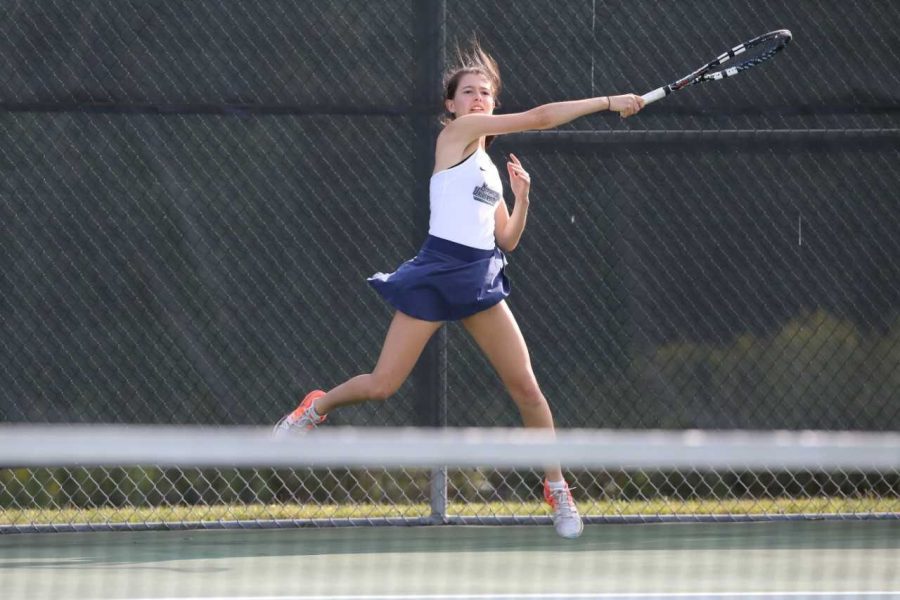 aioa Gomez de Segura (pictured) and Nenad Terzic were the PSAC player of the weeks for tennis. Both players are seniors playing in their last seasons for the Lakers.

Two MU athletes have been named Men and Women’s Athlete of the Week by the Pennsylvania State Athletic Conference (PSAC).  Nenad Terzic and Saioa Gomez de Segura, both senior tennis players, have been recognized by PSAC for their contributions to Pennsylvania collegiate tennis over the last four years.  “Both Saioa and Nenad have been an integral part of our program from the day they arrived on campus,” said Mercyhurst tennis head coach Jerome Simon. “They both perform not only on the court but in the classroom as well.”

Gomez de Segura, a senior double major in Economics and International Business, came from Spain to compete for Mercyhurst four years ago.  “Winning the PSAC Tennis Award this past week has been amazing for me,” said Gomez de Segura. “I did not expect it at all. Even though it is an individual award, I would not have won it without the unconditional support and help of my teammates.”

Terzic, the Men’s Athlete of the Week, came to Mercyhurst at the same time.  “I am from Belgrade, Serbia, and I have been playing tennis since I was 6,” said Terzic. “I got to Mercyhurst because when I talked to Coach Simon, Mercyhurst University seemed like a great fit to both my academic and tennis goals.”

As international students, both Gomez and Terzic have achieved success alongside the challenge of embracing an overseas move.  “Coach always points out that the main thing for everyone should be academics,” said Terzic. “Mercyhurst helped me to grow as a player, but more importantly as a person, too. My life completely changed when I got here.”

They both have held many previous awards, including PSAC West Women’s Tennis Player of the Year, and Mercyhurst’s Freshman Male Athlete of the Year, respectively.  “Being from Spain, a lot of people wonder how I ended up here, but I always wanted to come to the United States to compete at a high tennis level,” said Gomez de Segura. “Back home, combining both an academic and athletic experience is extremely difficult, and thus I decided to embrace in this journey, which gave me the opportunity to engage in a whole new culture. I am extremely thankful for this opportunity and cannot believe it is coming to an end this May.”

“The entire experience at Mercyhurst in both school and on a tennis court was probably the most valuable thing that any young person could get. It changed my views on many different things, and I will be always grateful for it,” said Terzic. “I would never get this award, nor would I have good results, if it weren’t for my team and my coach. They are the people who keep me motivated with their great results, and therefore its only fair to say that they deserved this award, too. This award means a lot to me since it always feels good when your results and effort are noticed and praised.”