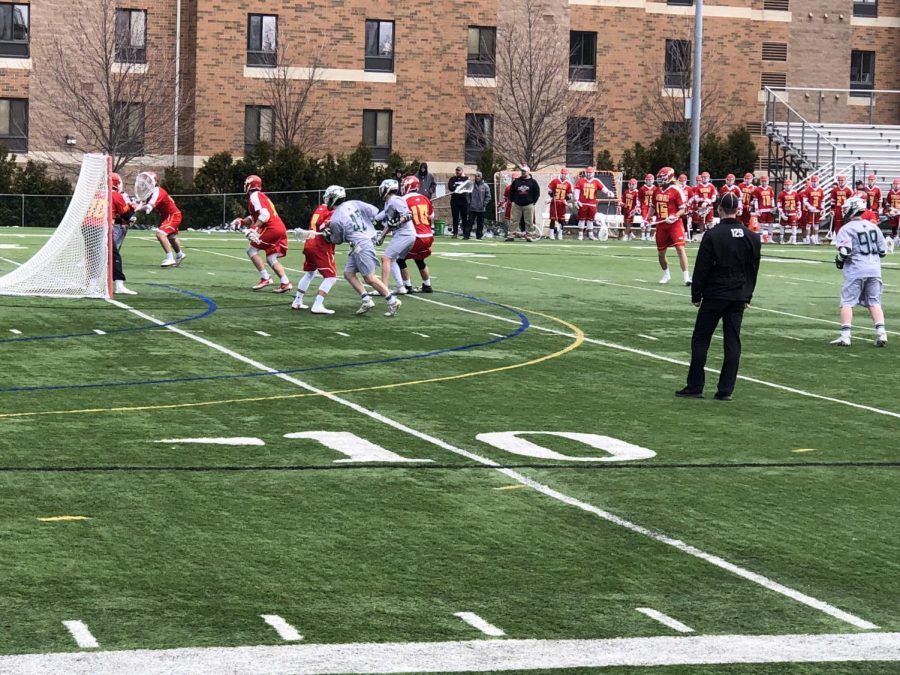 The Lakers’ Nathan Grenon, at center, battles in front of the Seton Hill University goal. Seton Hill would go on to win the matchup 11-9.

Despite holding onto a 5-1 lead for a portion of the game, the Lakers (6-4, 2-2) were unable to hold off a rally from the Seton Hill Griffins, who answered with five consecutive goals.  The Griffins may have been 9-1 overall and 3-0 in second place in the Greater Midatlantic Regional Conference (G-MAC).  But they were slow to initially meet the Lakers in scoring, and it would take some scoring rallies of their own to finally pull ahead of the Lakers.

In the opening minutes of the game, the Lakers converted on three separate occasions to lead 3-0 at 8:59 into the first quarter.  The Lakers were only answered by the Griffins once in the first; scoring for the quarter was 4-1, Lakers at the end of regulation.  A Laker lead was maintained going into the second with a margin of 5-1, the highest of the game.  The Griffins finally gained a 6-5 lead with three goals in the second quarter and followed with two in the third quarter to surpass the Lakers’ tally.

Mercyhurst’s Devin Pipher was able to even the score at 6-6 late in the third quarter.  The Lakers regained their lead after Dom Perna managed to find the back of the net with 12:49 remaining in the fourth quarter.  However, the Griffins answered in return, tying the game at 7 exactly five minutes later.  A Laker goal by Nathan Grenon gave them their final lead of the game with 6:07 left to play.

After that, the Griffins scored four consecutive goals within a span of five minutes, taking the lead for the remainder of the game until time expired.  The final Laker goal, coming in with 12 seconds remaining was not enough to save themselves from the 9-11 final score.  Oran Horn for the Lakers led the scoring for the day, finishing with three goals. Pipher, Perna and Grenon rounded out the scoring with two apiece.  Lakers goaltender Alec Starr finished with seven saves. Griffin goaltender Max Eismann finished with 11 saves.

Additionally, the Lakers outshot the Griffins 40-28 overall and 20-18 from the goal line.  Despite outshooting their opponents, the Lakers fell in faceoff wins, 18-5. Seton Hill also had a 28-24 advantage in groundballs.   The Lakers also controlled the ball better, ceding 13 turnovers compared to the Griffins’ 21.

“Our game against Walsh should be a good bounce-back game in order for us to get our confidence back,” said Pipher. “We need to stay focused, work hard, and stick to our systems in order to be successful like any other team.”  The Lakers return to action next on April 10, traveling to Walsh University in Canton, Ohio. Game time is 4 p.m.  “This (Walsh) game is an important game that will most likely dictate the rest of the season,” said Pipher. “You gotta stay focused and play our game, which I feel like we tried to do, but unfortunately we didn’t get the results we wanted.”  Walsh will be the Lakers’ third G-MAC opponent in a row. Currently, the Lakers are dead even at 2-2 in the conference.

After facing the Cavaliers, the Lakers will spend the rest of the regular season at home for their final three games.