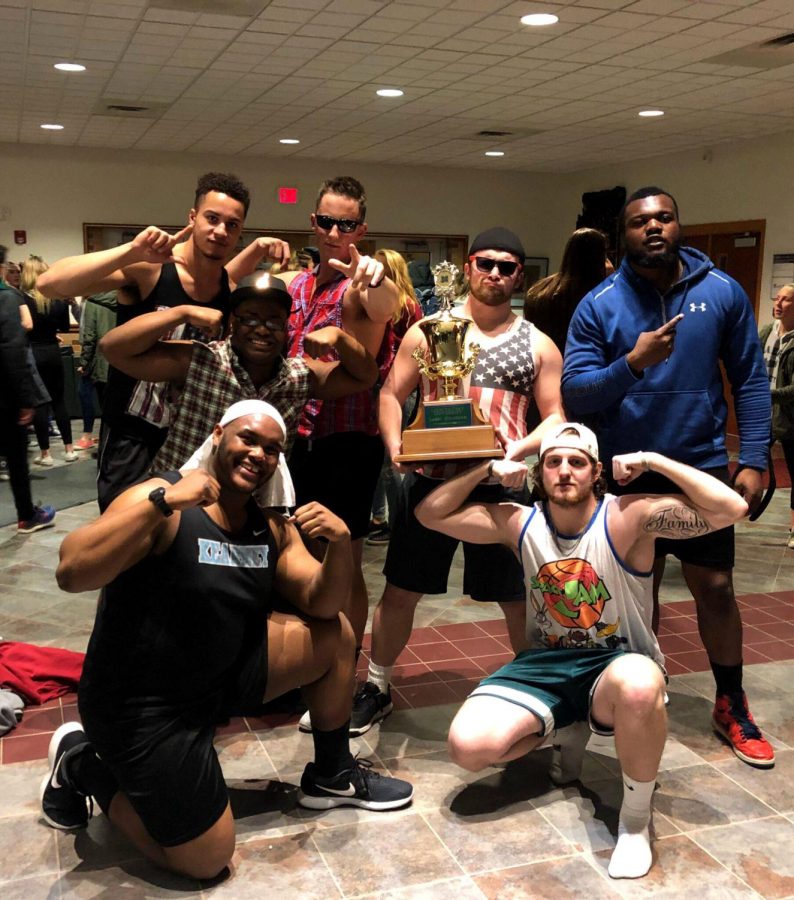 The football team was very excited to take first place with their rendition of SpongeBob and Boys in Motion.

Mercyhurst sports teams danced, sang and performed for a packed theater on April 5 at the annual Laker Showdown.

The fundraising event, benefiting Make-A-Wish Foundation, was a culmination of months of hard work from the Laker Showdown committee.

“They honestly helped me stay sane because the two weeks leading up to the event were absolutely insane. We managed to pull it off, with only a few mistakes along the way, but in the end it turned out just as we hoped,” said Tyillian. “I am very grateful for the people who helped sponsor, donate and create this event with me. I could not have done it without them.”

The event was certainly enjoyed by students, with laughs and cheers heard throughout the PAC.

The night began with a short story from Make-A-Wish representative Jan Stork, about a young boy with a traumatic brain injury who, through funding from the foundation, was able to meet his idol, John Cena. Because of this experience, he had the strength to continue fighting and eventually learn to walk. This inspirational story helped give a purpose to all that was done that night for Make-A-Wish.

“Because of what you do, they’ll be able to get better, live better and have a more normal life,” said Stork.

Halfway through the show, the Mercyhurst Dance Team gave their final performance of the year. Although they did not compete, they entertained the audience with their piece set to the T-Pain song “Church.”

Also during intermission, a number of items were auctioned off, including Bose headphones donated by Borden Perlman, the athletes’ secondary insurance company, and a number of athletic banners.

“We didn’t think the banners were going to go for as much as they did, and I was so excited when I heard the numbers being yelled out,” said Tyillian. “It helped us reach our goal of $2,800 and I cannot be more thankful for that and for Lauren Packer Webster donating them to us.”

The second half of the night featured performances by wrestling, women’s hockey, football, volleyball and women’s water polo, finally ending with the presentation of awards.

The football team won first place with their excerpt from SpongeBob and Boys in Motion.

“It was an incredible experience to feel the exciting atmosphere of the crowd and watch as it motivated us to perform how we did,” said football player Jacob Tretinik, sophomore Biology major. “It made winning the competition with the team a truly memorable experience, one that I’ll always remember.”

The women’s water polo team came in second with an excerpt from “Pitch Perfect,” followed by an unexplainable performance by the wrestling team.

“As long as we raise money for Make-A-Wish, that is all that matters,” Tyillian said. “Every little bit that we can give them helps tremendously. No child should have to go through what they do, and since we can’t control what God has planned, the least we can do is give them the wish they deserve.”

“The best part of the night was the money we raised for the Make-A-Wish foundation,” Tretinik said.

Although the Showdown has come and gone, there is still another opportunity to help the students meet their goal of $5,200 for Make-A-Wish. If this goal is met, $5,000 will be donated by the NCAA, which will qualify Mercyhurst to have a Make-A-Wish reveal come to the school and explain how the donated money will be used.

Students are invited to come out to Rivals Grant Wish this upcoming weekend, an event partnered with Gannon to raise even more money.

“I really hope as many people or more show up to that event as well,” said Tyillian.