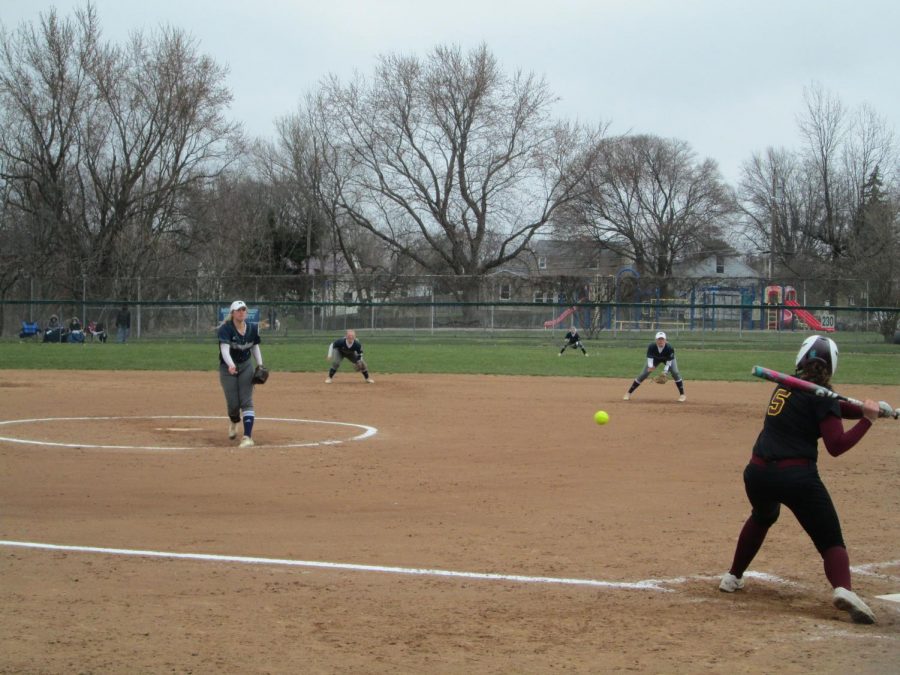 The Lakers’ Tori Pierucci, left, pitches a ball to the Golden Knights’ Kristina DeMatteis, at bat, during the fourth inning of Saturday’s first game. The Lakers swept 2-0, but fell 1-5 in game two.

Playing at home on April 13, Laker head coach Leanne Baker’s women were loud and raucous in the dugout and attempted to parlay that energy onto the field.  But they were unable to capitalize on the majority of the mistakes made by the California University Vulcans’ rotation, falling in a pair of walkoffs in the respective seventh and eighth innings.  A day later, the Lakers held off the Gannon University Golden Knights 2-0 in the first game, but fell 1-5 in the second contest of the afternoon.

The turning point came in the top of the seventh inning of the first game after Vulcan pitcher Emilee Downing (4-2, 2.27) recorded the first two outs of the seventh.  She walked Cassandra Egleston and allowed a single to Ellie Dougher before falling behind on Jolene Teller. But Teller lined a single to right to drive in Egleston with the game-tying run before former Laker Carly Konopka finished off the inning.  Tori Pierucci (3-9, 2.19 as of the contest) had seven innings of one run ball, but she had scattered 11 hits and did not induce a third strike on a single Vulcan batter.

The Vulcans had scored their only run in the fifth after Jacqueline Fowler drove Brooke Wilson in, but Wilson promptly opened the bottom of the seventh by scoring on a walk-off run.  Downing pitched six and two-thirds innings of stellar softball, striking out nine Lakers and allowing just a run on seven hits while walking four.  Pierucci was able to escape several jams herself, completing six innings without a single 1-2-3 affair.  She stranded Wilson on third in the opening frame after catching Emily Price, leading to a walk and two singles upon recording the first two outs of the inning and inducing Paige Wilson to end the threat.

Pierucci retired the last three in the fourth inning, but got entangled in the fifth after Vulcan Brooke Wilson singled to lead off, and Carlee Wickstrom singled to advance Wilson to third, setting up Fowler.  Paige Wilson was induced into a 4-4-3 double play after Fowler’s RBI single to end the threat.  The Lakers had their best opportunity in the sixth upon an opening walk to Teller, but it wouldn’t be enough for victory.

The second game saw Wickstrom and Paige Wilson hit run-scoring doubles for a 2-0 Vulcan lead in the first, but Laker Sarah Eschelman (1-7, 5.85) settled down to record the first retirement for the Lakers.  “I think my defense did really well for me,” said Eschelman. “They caught a lot of really hard catches, that’s what kept me in.”

Dougher and Taylor Fry singled to lead off the fourth before Konopka (4-3, 3.50) got coaxed into a wild pitch, advancing the runners Teller driving them in on a single to even the contest.  In the fifth, Meredith Grimes singled, leading off a Laker series. Lindsey Parese then scored again for the Lakers, making it a 5-2 advantage.  But the Vulcans promptly loaded the bases themselves with three singles in the bottom of the inning, followed by Hailey Wilson driving three more (5-5 all).  A single, hit batsman and walk loaded the bases again for the Vulcans in the eighth, and Abby Sacshe scored on the wild pitch for the Vulcans to end the contest.

April 18 is the next time the Lakers head to the plate, hosting Edinboro for a doubleheader.