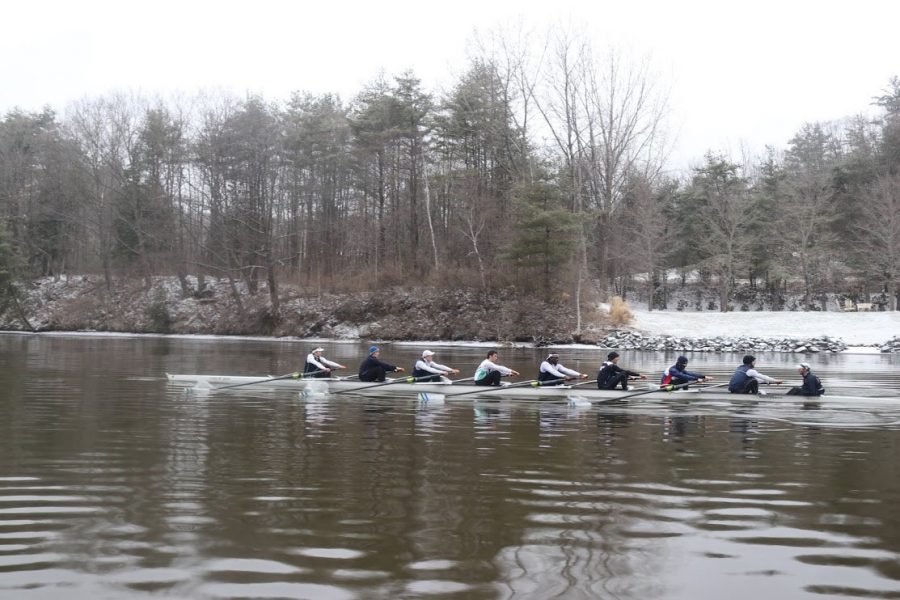 The weather was more of a typical day in January than April, with temperatures in the low 30s, sleeting rain and a strong tail current.  “Bitter cold temperatures and sleet made racing interesting, but we’ve put in the training for it,” said freshman Riley Cackovic. “We were reminded the night before that we just needed to stay with that for the first 1,000 meters and take off, which is what we did. I am ecstatic to be part of this historic moment.”

The first varsity eight won against Dartmouth’s first varsity, with Mercyhurst going 5:32.25 and Dartmouth going 5:35.87.  “Dartmouth is a fast crew,” said senior Charles Hummel. “They got up on us in the first 750 meters of the race, but the guys in the 1V are some of the toughest guys I know. They stayed focused and laid it all on the line and came away with the victory.”

The second varsity eight followed suit by winning by half a second against Dartmouth’s second varsity and by just over 21 seconds against their third varsity eight.  This weekend marked the first time in program history both the 1V and 2V eights won against an Ivy League team.  Despite the unfavorable weather conditions, the team was able to come out of the weekend making history and hopefully setting the tone for a successful rest of the racing season.

The Lakers put their oars to the shore next in an April 21 contest against Duquesne University in Pittsburgh.