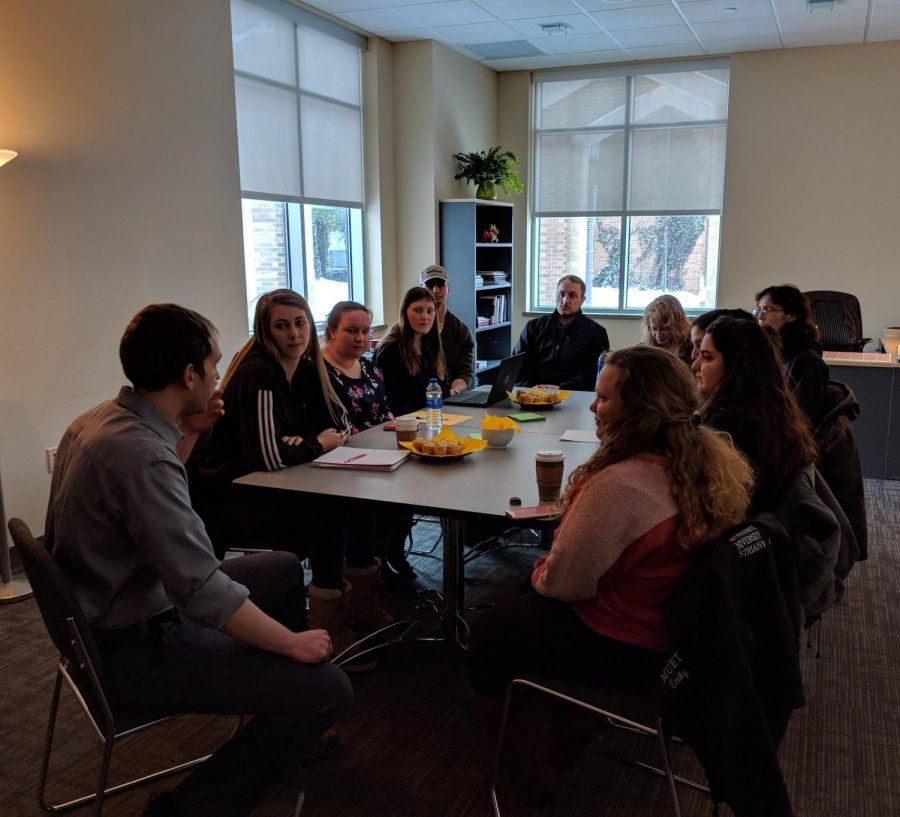 The final discussion of the Evelyn Lincoln Institute for Ethics & Society Ethics Symposium took place on April 17. The talk was an evaluation of the ethical implications of extending human life by decades.

Christopher Taylor, Ph.D., assistant professor of Chemistry, raised the question: “If biotechnology allowed a person to live 130-150 years, who would get to live longer and how should it be paid for?”

Students were given an opportunity to express their thoughts, bounce ideas off one another, and turn to Taylor to resolve disputes or answer questions.

Transhumanism is the belief that the human race can evolve beyond its current physical and mental limitations to expand and improve human life, enabling humans to live decades beyond the current average lifespan.

In doing so, scientists could create a world where the rich could live to be 150 years old, through personalized surgical treatment, such as receiving blood or organs grown especially for that individual.

For the purpose of discussing the idea of transhumanism hypothetically during the talk, students set a price of $100,000 for this treatment, annually, from the age of 50.

“It is very plausible that biotechnology developed in the next couple of decades will enable people to live significantly longer than they do today,” Taylor said. “It isn’t clear who would have access to those advances, or what their effect would be on society. I think it’s worth it for students to think through the ethical ramifications while this is still a hypothetical issue so that they have a carefully reasoned position if and when it becomes a real issue.”

Students brought up the points of how health insurance companies would deal with this, how we would test it on humans, what effect it would have on the federal budget, how we might alter the global gene pool and how it might increase jobs in the medical field.

More important were the ethical implications of how this would be inherently tied to socioeconomic status. Students discussed how a screening system put in place to test mental competency might be useful to ensure that the right people have the ability to live so long, but also worried that this would be susceptible to bribery and corruption.

Finally, students asked themselves, “Would elderly people actually want this? What personality types would be most attracted to this?”

While Taylor posed the questions, “Who do you trust to make the decision of who gets to live and die? What panel would have that power and would you trust them with it?”

The answer to most of the questions raised was the idea of whether humans want quality or quantity out of life. Students had varying opinions when deciding if a longer life equals a happier one.

Sophomore Political Science major Emily Thayer spoke about how she felt about the issue after discussing it with peers.

“I really enjoyed learning about something that is most likely going to have serious implications during our life,” Thayer said. “The flexibility of the talk let us learn about and discuss the aspects of biotechnology and its life-extending effects that we found most interesting. I was most interested in the ethical dilemma and loved getting the chance to hear other students’ opinions. It was a great opportunity to begin to form my own opinion on a complicated issue.”

Verna Ehret, Ph.D., director of Evelyn Lincoln Institute for Ethics and Society, felt that this particular topic was an especially important one to end the ELIES Student Symposium Series for this year.

“I created the Student Symposium Series through the Institute to provide students with a place to gather and discuss pressing and interesting ethical questions outside of the classroom,” Ehret said. “This was particularly important because it allowed students to interact with faculty and peers they might not otherwise meet but with whom they share an interest.”