Osama bin Laden’s death on May 1 proved a seminal event in the lives of most U.S. students currently enrolled in college.

In many ways, 9/11 shaped us, and bin Laden’s violent death was self-ordained by the violence he unleashed upon the U.S. 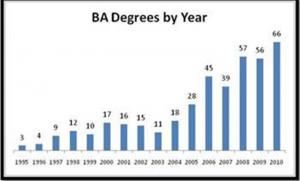 Provided by David Grabelski: This graph shows the number of intelligence undergraduate degrees by year at Mercyhurst College.

He was a fugitive who had been led by anger and ignorance to commit an act of violence, and he was caught by an intelligence network that was equally determined to find justice.

But he went on to explain that “we can certainly characterize Bin Laden’s death as an intelligence success. There are people that have done nothing but work on this case for the last 10 years. In large part, the trail that led to bin Laden was intelligence. What finally got him was intelligence.”

“Intelligence is a growing field. I see an increase in job opportunities within business and law enforcement intelligence, and I don’t think the fact that we got bin Laden is going to diminish the current level of effort our government and its allies are putting forth to gather intel and create actionable information on all terrorism,” Heibel said.

The thing about terrorism is that “terrorism is the magic tool to get publicity for a cause—it’s the magic bang-for-the-buck tool because it demands attention and attracts media like a moth to a flame,” Heibel said.

Terrorism is not likely to go away any time soon, and Heibel thinks bin Laden’s death will “give a new respect to the field of intelligence because it paints intelligence in a positive light rather than focusing on covert actions and dirty tricks. The modern intelligence professional produces actionable knowledge for decision makers, and this leads to concrete results.”

After the 9/11 terrorist attacks, there was an increase in the intel department’s enrollment, according to David Grabelski, director of undergraduate program of intelligence studies and a retired Los Angeles Police Department homicide detective.

Grabelski said he thinks that bin Laden’s death will not affect the department’s enrollment rate as much as 9/11 did because “after 9/11, we went from being a minor in history to a full department of studies.”

As for how bin Laden’s death may affect the department, Grabelski said it “will make a great case study about how analysis supported decision-makers led to a successful tactical operation.”

As for any MCIIS alumni being involved in finding bin Laden, Grabelski said he doesn’t know and isn’t likely to ever know, but “with the number of alumni in the field I would not be surprised if some program alumni were in some way involved. I recall we once also talked about MCIIS alumni who were involved in creating the Deck of 52 top terrorists,” Grabelski said.

Daniel Mulligan, an intelligence studies instructor and graduate of West Point, said, “I hope it will give the public a little more confidence in our ability to do intelligence, even though it took 10 years to find Bin Laden. Ultimately, as the facts of this case become known, it will be educational for the public.”

“9/11 was similar to Pearl Harbor with the idea of ‘you punched us, you hurt us and now we’re going to hurt you back,’ and there was this huge spike in enlistment because people wanted to get into the fight,” Mulligan said.

At Mercyhurst and in the U.S., the growing need for actionable intelligence continues.