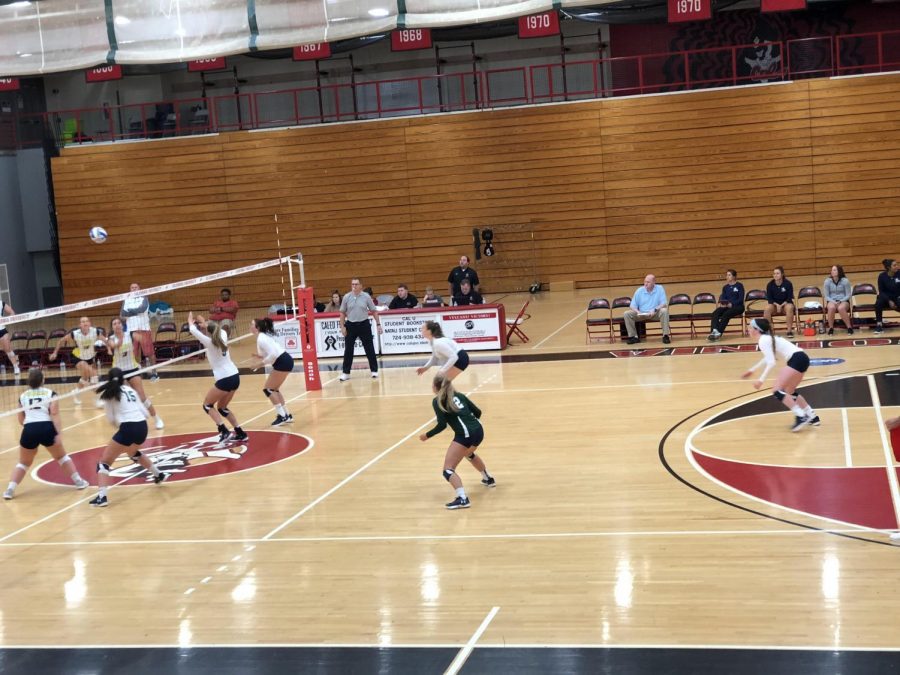 The Lakers square off against Notre Dame College of Ohio during the California of Pennsylvania tournament Sept. 8. The Lakers would ultimately fall to Notre Dame and split the tournament.

With an overall score of 5-8, the Mercyhurst’s volleyball team had a rough start to the season.

Ryan Patton, the head coach, said the team has had some injuries with the season so far, but that the players are better than their record shows.  “There have been some losses that we shouldn’t have lost,” Patton said.

In the first four games in August, all of which were held in Michigan, the Mercyhurst players lost 3-1 to Wayne State University, were shut out by Winona State University and Upper Iowa University, and captured their sole victory of the series with a 3-0 win against Lake Superior State University.  “The teams we played the first weekend of the season, we sort of figured we were going to lose,” said Patton. “They are really good teams, but we wanted to learn about ourselves.”

In the next four games, held in West Virginia, the Mercyhurst women defeated University of Charleston 3-2, but lost another three, falling 3-0 to Shepherd University, 3-1 to West Virginia State University and 3-1 to Urbana University.  “It was a lot of just learning what to do as a new team,” said Laker freshman Beth Brady.  Finally on home turf, the Lakers scored a 3-1 victory over Point Park University on Sept. 5.

Mercyhurst split the next road trip, winning two contests and losing two contests in California, Pennsylvania. The Lakers lost 3-1 to the University of Nebraska at Kearney and 3-2 to Notre Dame College of Ohio, but racked up 3-0 shutouts against West Virginia Wesleyan College and Southern New Hampshire University.  “We handled Southern New Hampshire just like we wanted to,” said Patton.  That victory was quite convincing, with the Lakers winning 25-18, 25-18 and 12-25.  “We found some weaknesses and really attacked them. It wasn’t a cheap win.” Brady said. “It was a good game. Early on we learned how to shut them down and we took care of their big hitters and we really just used all our energy for the rest of the day and put it all out there.”  Coming up next for the Lakers is a series of Pennsylvania State Athletic Conference (PSAC) opponents.  In fact, the entire remainder of the regular season is against PSAC opponents rather than nonconference ones.

The Lakers travel to Kutztown on Sept. 14 for a 7 p.m. court time.   The next day, the Lakers remain on the road, taking on the East Stroudsburg University.  “I’m hoping we continue to win as much as we can,” Brady said. “It would be great to win against teams like Gannon, Edinboro and Clarion — the big ones.” Patton said. “I think we should be a playoff team. We start our PSAC matches next week. This team could be really good.”

Crosstown rival Gannon will meet the Lakers in the Mercyhurst Athletic Center on Oct. 2. Gannon currently is 11-0, leading the Northwest division. Mercyhurst is at third, below Edinboro and above Slippery Rock (3-5).