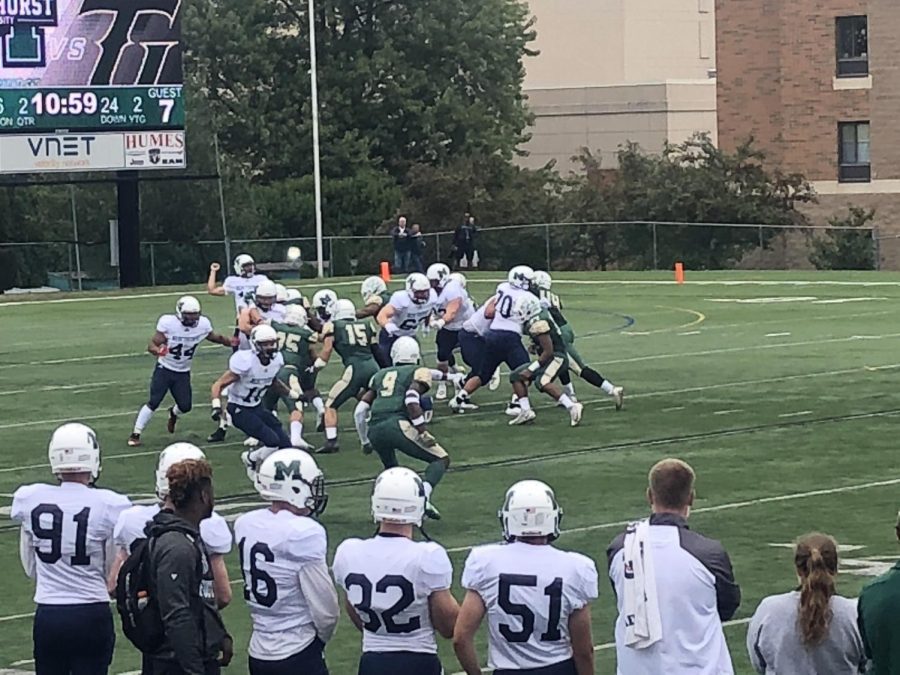 The Lakers’ quarterback, Doug Altavilla, fakes a pass in the second quarter against the Dragons in the home opener Sept. 8.

On Sept. 1, the Mercyhurst Lakers football team started the season with a 14-9 loss to nonconference opponent Hillsdale College.  Unfortunately, the Lakers again found themselves falling in a close game during the home opener Sept. 8, losing 24-20 to the Tiffin University Dragons in front of a 1,200-strong crowd.

The Lakers took the lead on the first play of the game when running back Garrett Owens converted a 63-yard touchdown run a mere 20 seconds into the runtime.  The Dragons, however, fired back not long after the initial Laker score to tie the game.

After a halftime show featuring the Mercyhurst Laker Pride Athletic Band’s first performance, the two teams looked to break the back-and-forth.  The Dragons took the lead in the third quarter, 17-14, with the sole points of the quarter. The field goal culminated a 4:17 long drive, the longest of the quarter.  From the end of the third and into the fourth, the Lakers had the longest consecutive drive of the second half (6:24), coming from their own 22 yard line.  Laker kicker Mark Shafer Jr. capped the drive, evening up the score to 17-17 with a 22-yard kick.

It would be the Dragons, however, who would take the lead until the end of the game.  Running back Tylan Rice regained the permanent lead for the Dragons with a 50-yard touchdown run. Rice’s play came during the drive after the Laker score.  Shafer converted another 22-yard kick, reducing the gap to only four points, but the kick served as the game’s final points.

Owens scored two touchdowns, one rushing and one receiving. He rushed 17 times for 111 yards and had 4 receptions for 32.  Quarterback Doug Altavilla finished 20 of 29 for 205 yards and one touchdown.  Wide receiver Austin Hence had six grabs for 69 yards. Linebacker Alex Zacharyasz was the leading tackler with 11 stops.  Linebacker Corbin Kessler had 10 total tackles, including a half-sack, and two pass breakups. Linebacker Rocky Owens contributed 9 tackles, including a sack.

“The game came down to finishing strong,” said Owens. “Next week we need to finish strong and fix all the little things.”

The Lakers are back in action on Sept. 15, facing Bloomsburg University (1-1) for the Lakers’ homecoming game.  Kickoff is at 1 p.m. at Tullio Field against the Lakers’ third nonconference opponent in a row.  The first Pennsylvania State Athletic Conference opponent for the Lakers is Indiana University of Pennsylvania on Sept. 22.  Indiana is 2-0, and is in second place for the conference’s west division.  Edinboro claims the top spot at 2-0.