'The Concert' tells of determination against discrimination 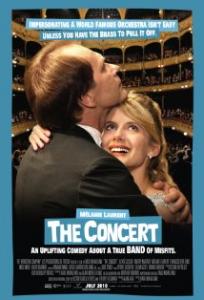 Thecastof.com photo
Beginning today at 2:15 and 7 p.m., “The Concert” will air as a part of the Guelcher Film Series at the D’Angelo Performing Arts Center.

A story of bravery, passion and teamwork, “The Concert” chronicles the story of Andrei Simoniovich Filipov, a world renowned orchestra conductor.

Thirty years prior to this 2009 film, Filipov was fired as the conductor of the Bolshoi orchestra due to his employment of Jewish musicians.

In a series of fortunate affairs, Filipov, now working as a janitor at the orchestra, intercepts an invitation for the Bolshoi to perform at the Chatelet Theater in Paris.

Filipov resolves that he will gather his former musicians, go to Paris and play in place of the Bolshoi orchestra. He must turn his group of Jews and Gypsy musicians into a world renowned orchestra in a matter of a few weeks.

“The Concert” inspires audiences by illustrating Filipov overcoming the obstacles of discrimination through the majestic power of music.

The cast includes Aleksey Guskov as the ambitious conductor Filipov and Melanie Laurent as Lea, the young virtuoso whose talent is imperative to perform such a scheme.

The San Francisco Chronicle exclaims that the film “ends in a place of transcendent emotion that sends everyone out of the theater in a swirl of transport.”

The Chicago Sun-Times concludes it is “a beguiling, absurdist, bittersweet movie… at once zany and profoundly emotional, it is a crazy goulash that suggests the screwball nature of history, politics and human nature.”

Admission to “The Concert” is free to students with valid Mercyhurst ID.