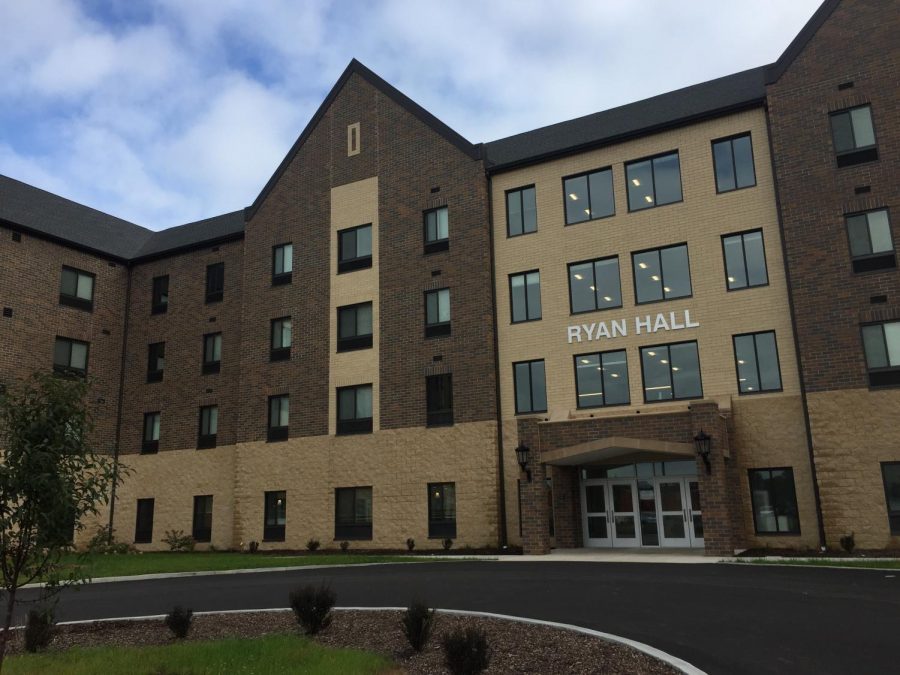 “The Ryan Hall project was definitely a group effort,” Director of Residence Life & Student Conduct Megan McKenna said. “We were very excited that it was completed on time and is full.”

Administration and the residence life offices are very pleased with Ryan Hall’s completion and its function as a replacement for older living areas.

“Overall, our department is very excited about Ryan Hall. From higher administration to the staff in our office, we are thrilled to be able to offer new housing options to students, especially when it means replacing existing areas that need a make-over,” McKenna said.

There are multiple features that came out with the new hall, including 92 suites, new parking facilities and a new open kitchen dining facility. The hall houses students in all four classes. The first floor is reserved for freshmen in the Honors Program.

“Ryan Hall serves as the starting point for other improvements on Briggs and Lewis that are needed,” McKenna said. “The building is a true testament to President Victor and his administration’s vision of what a residential campus should look like.”

Students were eager to move into their new home and be a part of this new community, and for the most part, students were pleased with all that the new residence hall had to offer.
Vinny Lucent, a junior, was very pleased with the results that the hard-working construction team built for Mercyhurst University.

“I really like how they set it up,” said Lucent, “The space that you have in the room makes the suite more comfortable. The AC is also a plus. Overall, it’s great to be a part of a new community.”

Three football players on the second floor also gave their opinions on the new hall, wishing that all the facilities in the new hall were finished earlier in time for their move-in dates, instead of only just the suites. However, they were still very impressed with the results and the sizes of the rooms.

Even though some students had to wait to officially move into Ryan Hall, the Residence Life staff was hard at work to finish up the renovations.

“There were many students that were here as early arrivals for sports and other commitments that were in temporary housing for a time, and when the building opened it was a sight to see as all of those folks were the first to move in,” McKenna said. “We appreciate everyone who was pivotal through those initial days — namely our maintenance and housekeeping staff, Police & Safety, administration, all the Resident Assistants/Hall Directors and Assistant Directors in our area. It was definitely all hands on deck.”

Lauren Rogus and her roommates on the third floor wished that the suites came with a stove or oven, especially when the new dining facilities were not yet opened. This made it inconvenient for them because they had to go all the way to Grotto Commons if they wanted something late at night.

“I like the food in Ryan,” sophomore Intelligence Studies major, Isabella Fragnoli said. “It offers a variety of gourmet-style food to a new place on campus.”

The placement and new amenities offered with Ryan Hall help to foster community at a new place on campus. The residence hall also has programming space for RAs to host engaging events that will appeal to students regardless of living in Ryan or not.

Cariel Lewis, assistant director of Residence Life and Student Conduct, was thrilled with the opportunity to bring new programs to the new hall. Lewis plans to have pizza and movie nights as part of Ryan Hall’s new programs.

The conference rooms will also be utilized by all organizations and clubs for meetings. Brand-new study rooms are also in the process so students will not have to go all the way to the library.

“The best aspect of Ryan Hall is that it offers programming and meeting space to this side of campus. Students now have a place to eat and hang out, other than their apartments and townhouses,” McKenna said. “This opens up many possibilities for programming in this area, ranging from programs put on by the Resident Assistants to events sponsored by MSG and other student groups.”